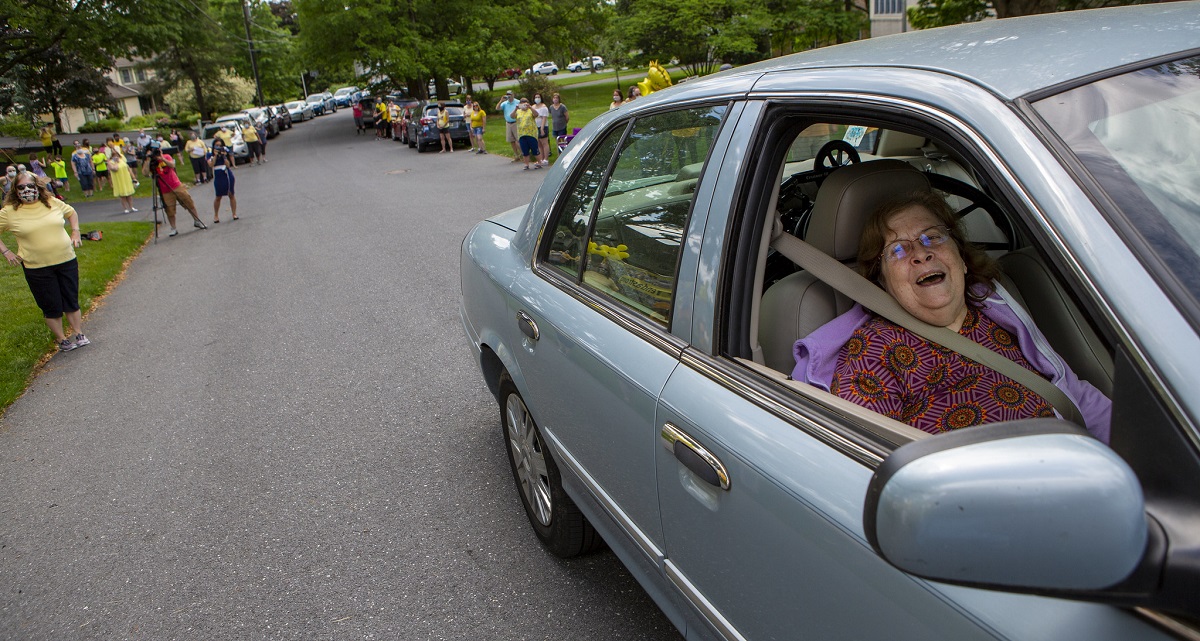 Brenda Pogue smiles as her husband Cliff drives her through her neighborhood where friends and family greet her after she won her nearly two-month battle with COVID-19.

Laura Yates hits the “end call” button on her smartphone and raises it over her head like an Olympic torch.

“They left five minutes ago!” she shouts through her surgical mask.

The crowd encircling her parents’ driveway pauses to listen and then returns to their small talk. Some cast worried looks at the charcoal-colored clouds that skate uncomfortably near, threatening their homecoming party.

Most wear yellow ― mustard-colored T-shirts, canary dresses and school-bus-shaded button-ups. Some shuffle behind walkers or ride motorized carts. Others have come across lawns with fistfuls of yellow balloons or homemade construction-paper signs that read “#Brendastrong” or “We believe.”

Everyone watches the road for a glimpse of the friend, neighbor and grandmother they thought they lost. They’ve come to see Brenda Pogue, for months the subject of their prayers and deepest worries.

Fifty-six days ago, Brenda disappeared into a COVID-19 cloud and came out the other side.

And in just a few minutes, she will crest that hill in her husband Cliff’s Grand Marquis and arrive home at last.

“There I am,” Kathleen Watkins says. She’s found her own image among the hundreds spread over the 20-foot-long sign Yates, who is Brenda’s daughter, stretched across the posts of a volleyball net in the front yard of her parent’s split-level in their tree-shaded development in Linglestown, Pa.

In early April, COVID-19 hit Brenda as an intestinal ailment. A doctor suggested she go to Hershey Medical Center for fluids. While there, she tested positive for the new coronavirus.

That same night, she opted to be put on a ventilator. By 10 p.m., the disease had worsened.

For weeks, as her mother’s condition veered toward an abyss, Yates spent a large portion of nearly every day updating everyone via text message and on social media about her condition. It was therapeutic, an outlet for thoughts that hurt too much to voice. 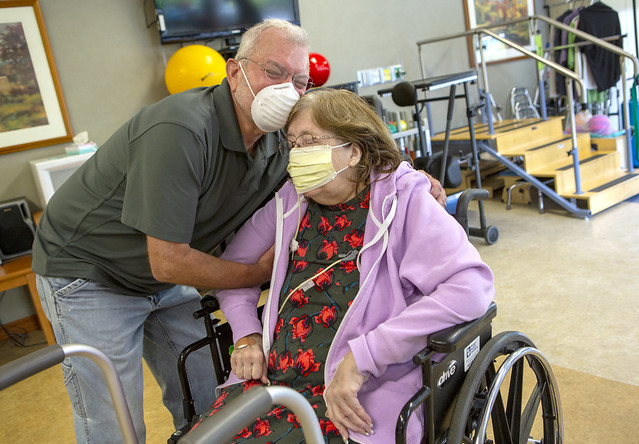 Yates soon discovered she wasn’t screaming into a void as she posted on social media. Hundreds responded. Soon, she was setting up Zoom prayer groups. Brenda has never been poor in the friend department. She’d taught unknown numbers of people as second-grade teacher and a librarian at various schools in Central Dauphin School District, primarily Linglestown Elementary School. She’s active in her church, the Dauphin County chapter of the Pennsylvania Association of School Retirees, a teaching sorority and other groups.

Then, on April 13, the day after Easter, Yates’ post: “They just took her off the paralytic, and the blood pressure medicine is completely off. Dialysis still working well. The ventilator is back down to 40% and her PEEP number back down to 8! … yea team prayer!!!!!! Wish I could hug you ALL.”

The 20-foot sign and this big party are Yates’ idea. Brenda doesn’t like a fuss. But Yates, who has been conscious through the entire two-month nightmare, made the choice. A fuss will be made.

Many of the partiers who have gathered here now live nearby and used to see Brenda nearly every day until her health turned. Others have come from a distance and haven’t seen her in years. Kerri McCarthy drove up from Lake Meade. She hasn’t seen Brenda in nearly a decade and a half and “wouldn’t recognize her if I saw her on the street.” She was a friend of Brenda’s husband years ago.

Yates’ social media posts moved McCarthy, and now here she is in her yellow shirt ― Brenda’s favorite color. “The Hershey staff kept saying, ‘Don’t give up hope,’” she says. “How can they be so full of hope? I really applaud the staff.”

For a time, hope seemed almost ludicrous. While she was intubated, Brenda’s kidneys began to fail. She underwent continuous dialysis. A drug caused arrhythmias, so it was discontinued. At one point doctors told Yates Brenda was the sickest patient at Hershey Medical Center.

But slowly her mother fought.

Just across the street from where Yates has strung her sign, Alice Lubrecht, who lives four doors down, sits in a camp chair she’s brought, as though she’s waiting for a parade. Both families’ kids had been childhood friends. They used to splash around the Pogue pool in the summers before they drifted apart in junior high school.

People in the Linglestown neighborhood often gather to go for walks, Lubrecht says, but lately Brenda had been staying in. Two years earlier, she’d fallen and broken her hip while vacationing at her family condo in Brigantine, N.J. She was also received liver transplant to treat a liver disease caused by an enzyme deficiency. Since the pandemic, Brenda had been avoiding going out because her transplant put her in high risk category. Nobody is quite sure how she contracted COVID-19.

Everyone is so focused on the crest of the hill that leads into the development, they don’t notice Cliff’s Grand Marquis until he’s nosing into the crowd from the opposite direction.

A moment later, everyone howls. Cowbells ring. Music blares from the open doors of a car. 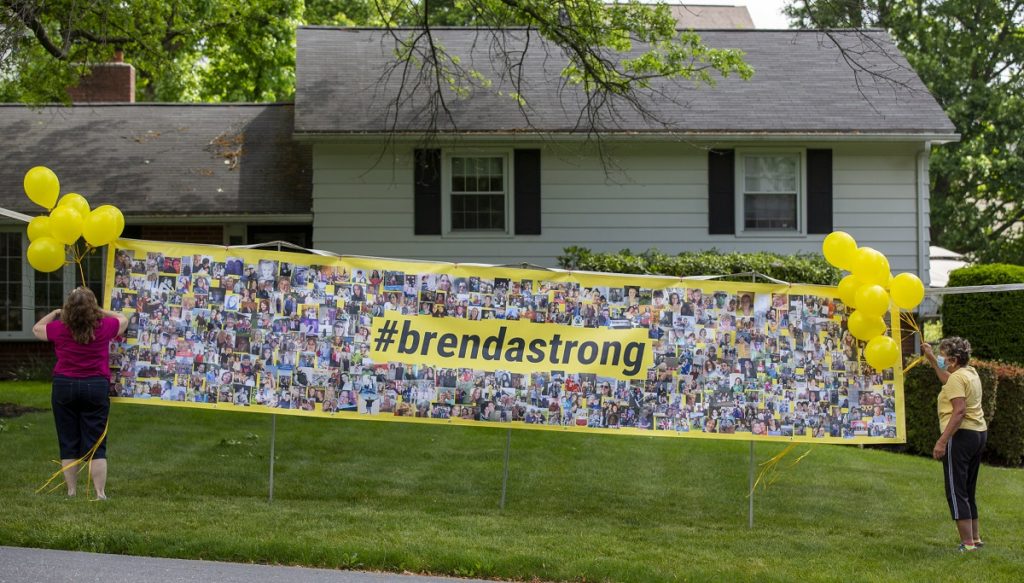 Denise Scarborough, left, and Sallie Bruno, right, attach balloons to a banner in the front yard of Brenda’s Linglestown home.

Cliff coasts past his house like he’s driving through a car wash. Everyone rushes in with their signs and their cheers.

In the passenger seat, mouth agape in disbelief, rides the guest of honor.

“You made it home!” someone yells.

The Grand Marquis drifts up the hill and out of sight. Cliff turns around and makes two more passes to delight the crowd before he rolls into the driveway.

Yates places a wooden dining chair next to the passenger side door. Brenda turns in her seat and places both feet, clad in gray socks, on her driveway. Gingerly, she stands.

The crowd cheers. She cups her hands and holds them together to form a heart. She lifts the heart to the onlookers and then sits in the chair.

“Thank you, everybody,” she says. “Sorry we’re late.” She peers into the crowd. “I don’t know who everybody is with these on.” She points to her surgical mask.

It’s Sue Knaub. The two graduated from Central Dauphin High School together in 1970. This September, the reunion is still scheduled at a nearby racetrack.

It’s one of many coincidences that seem to portend divine intervention. A month before becoming ill, she finished reading the Bible cover-to-cover for the first time, a labor that took her two years. Later this week, her first week home in two months, she will find out the gender of her latest grandchild. Even the storm clouds that swirled in overhead and growled with thunder floated away as if pushed. When Brenda arrives home, it’s sunny.

“You don’t understand,” she says, sitting in her hot driveway, soaking in the rays. “I’ve been so cold.”

The humor has taken nearly a month to return. After emerging from a coma and coming off the ventilator that did most of her breathing for 17 days, Yates sang hymns to her over a video internet connection.

Her mother wasn’t speaking at the time. On the screen Brenda looked confused. Sometimes she pulled a blanket over her head. Intensive care delirium, they said. For more than a week, she was unresponsive. Doctors performed MRIs and CT scans to determine if she’d had a stroke or if something had affected her mind.

But little by little, Brenda and her good-natured sarcasm returned.

She has no recollection of most of the past two months. One moment, Cliff was telling her he was worried about her breathing. The next, health care workers in protective equipment were pushing her in a gurney out of Hershey Medical Center for rehabilitation.

“I keep expecting them to tell me they’re making it all up,” she says.

Cliff and Yates’ sister couldn’t join in when Yates called to sing to her mother. It was too hard. Early into Brenda’s fight, Cliff told the family how to access the right accounts in case he would die. He worried neither he nor his wife would survive. 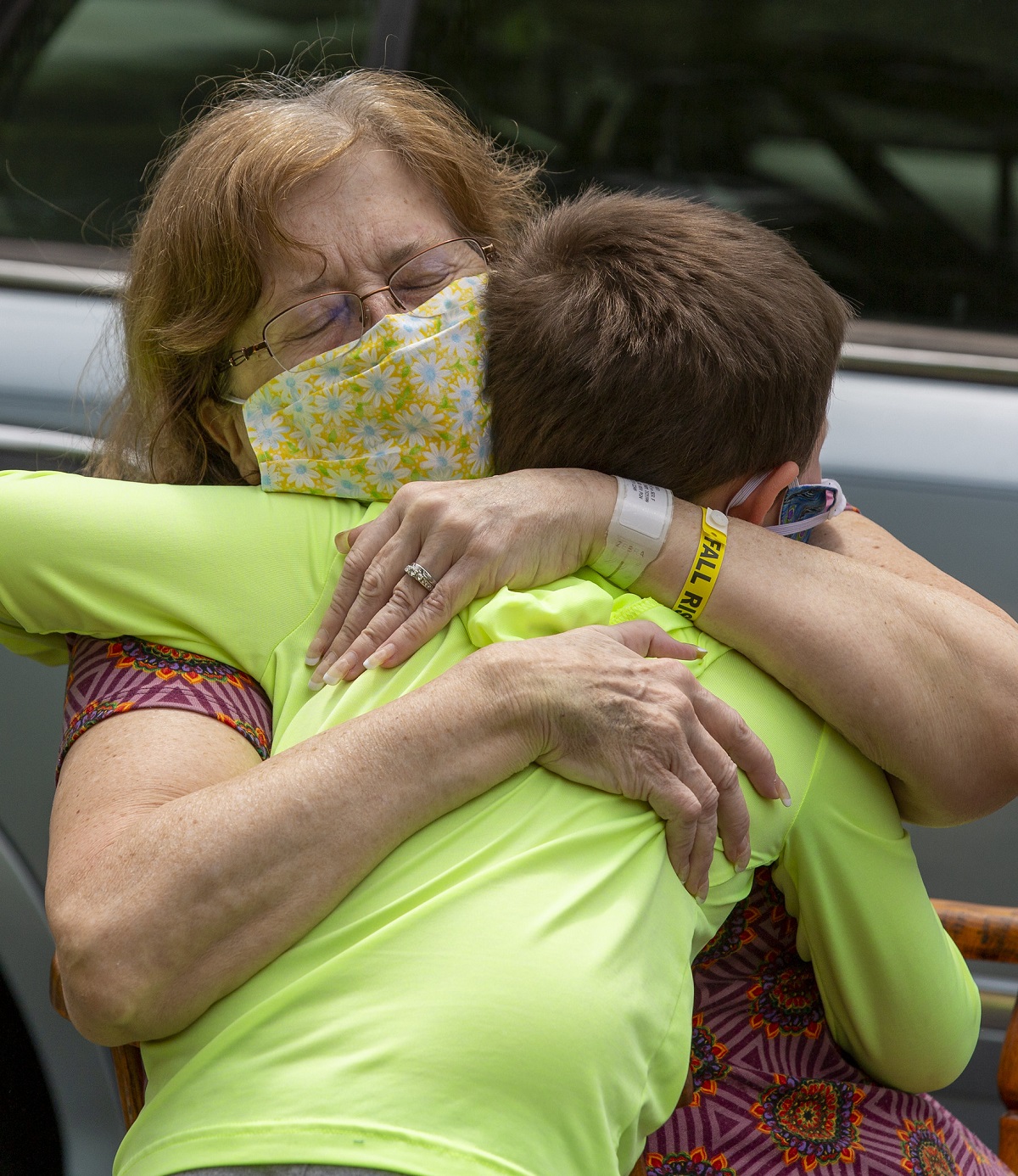 Brenda embraces her 6-year-old grandson Ty Yates for the first time in over two months.

When he didn’t develop the illness, he was wracked with survivor’s guilt. He couldn’t eat. He couldn’t sleep. For almost 60 years, he told them, they did everything together. “I can’t function without her,” he told them.

But now, as he stands behind the wife who has come back to him, he grips the back of her chair with one hand and with the other wipes away tears that now never seem to stop flowing.

Visitors talk with her one by one and slowly melt away.

Behind her, the house where she’s made so many memories waits for more.

It’s the question they used to ask professional football players after a Super Bowl win: Brenda, you’ve just beaten COVID-19. What do you want to do now?

She’s already done it. Moments after she sat in her chair, two boys, Kalen Yates, 11, and Ty Yates, 6, wrapped their arms around her.

“Hug my grandkids,” she says.