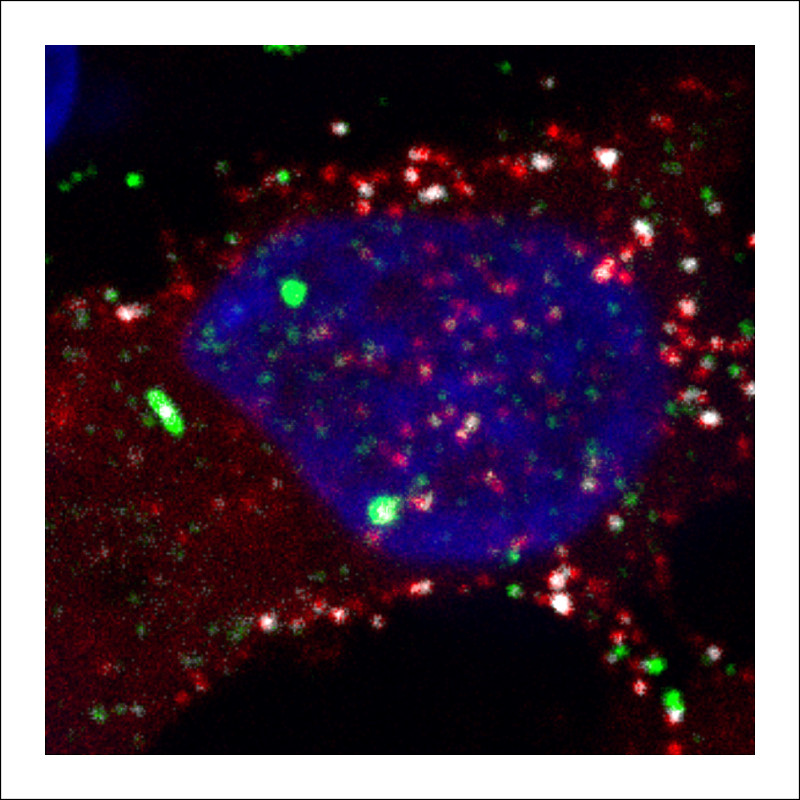 A snapshot of a cell infected with the retrovirus Rous sarcoma virus (RSV). Gag protein is shown in red and unspliced RNA is shown in green.

A protein that is critical for retrovirus replication may select viral genetic material for packaging within the nuclei of host cells, rather than in the cytoplasm, as was previously believed. The research, led by a team at Penn State College of Medicine, could have implications for the development of therapeutics that target this protein.

Retroviruses are a type of virus that use cells as machines to make more virus particles that are spread from cell to cell. There are three major infectious human retroviruses, including human immunodeficiency virus-1 (HIV-1) the cause of acquired immunodeficiency syndrome (AIDS). The lab of Dr. Leslie Parent, vice dean for research and graduate studies and professor of medicine, studies the avian retrovirus Rous sarcoma virus, which replicates similarly to HIV and causes tumors in domestic fowl.

Their research focuses on the role of a special protein called Gag that acts as an escort for genetic material in viral replication. It forms a complex by binding to the viral ribonucleic acid (RNA) to package it into an infectious virus particle. According to Parent, a professor of medicine and microbiology and immunology, their latest discovery puts scientists one step closer to developing therapeutics that can stop this complex from forming.

“Our primary goal has been to understand where the initial interaction between the Gag protein and viral RNA occurs,” said Parent. “Other drugs and approaches have targeted viral replication after these complexes form. Our hope is that if we can better understand this interaction, early intervention strategies could be developed.”

With so much activity going on in a cell, Parent and her colleagues put fluorescent “labels” on the Gag protein and viral RNA so they could watch their interactions in live cells using confocal microscopy. The images and videos of this process were captured and published with their data in mBio, a journal of The American Society for Microbiology.

As they hypothesized, they observed that Gag does bind viral RNA in the nucleus, and the complex traffics out of the nucleus. They propose that the viral Gag-RNA complex ultimately travels to the outer membrane of the cell where the viral particle is released to infect new cells. According to Parent, advances in technology have made this finding possible.

“Visualizing a live cell in real time allows you see the intricate dynamics of its functions,” Parent said. She noted the College of Medicine’s core facilities, including leading-edge live-cell microscopy, were integral to carrying out this project that has been years in the making.  “When you observe a cell over time, you can see the start, end and speed of various processes. It allows you to witness how a live cell deals with a viral infection.”

Rebecca Kaddis Maldonado and Breanna Rice, postdoctoral scholars at the College of Medicine and coauthors on the publication, said knowing that Gag protein selects viral RNA in the nucleus opens up more questions that will be explored in future studies. They want to understand more about the kinetics of the interaction between Gag protein and viral RNA in the nucleus, mechanisms for how the complex moves outside the nucleus, and what other elements of the host cell may play a role in the process.

“This observation is just the first of a series of investigations we need to carry out in order to understand this interaction,” Maldonado said. “The more we know about the details of this process, the better suited we’ll be to propose or develop therapeutic targets.”