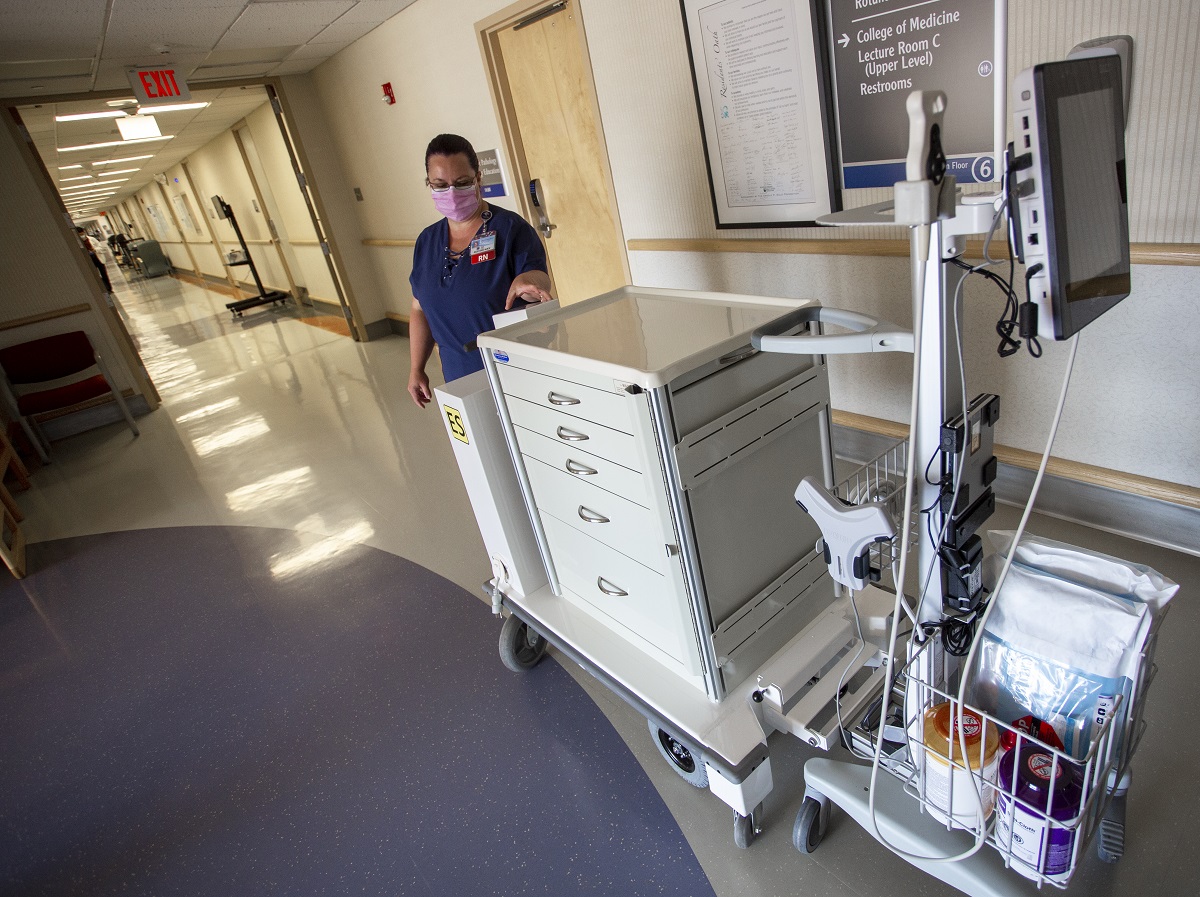 Justin Soulier knew there had to be an easier way.

The nurse manager for Penn State Health Milton S. Hershey’s Nursing Vascular Access Team (NVAT) knows the issue only too well. His team is responsible for providing access to patients’ circulatory systems. The job requires constantly moving a lot of equipment – two big cartloads at a time, actually – down hallways, between elevator doors and around turns.

Two years ago, Soulier approached the College of Medicine’s Center for Medical Innovation and Penn State’s Engineering department to get the ball rolling on a less cumbersome way to move ultrasound gear from place to place.

The solution has just arrived. Meet NVAT’s new cart. It links the two classic vascular access carts together and ferries them around the hospital with an electric motor.

“Justin really came through,” said Heather Lambrecht, a registered nurse and member of the team. 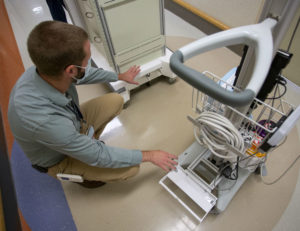 Justin Soulier, nurse manager for the Nursing Vascular Access Team, explains how the hitch on the motorized cart, left, connects to an ultrasound machine for transit.

She’s nearly 6-feet tall and must stoop to guide two non-motorized carts. The taller, skinny cart ferries the monitor that displays ultrasound views of veins and arteries. The second cart is the bear, a mammoth file cabinet loaded with equipment like the catheters and IV lines they install.

During the height of the COVID-19 epidemic in April, Lambrecht was quarantined for 2 1/2 weeks. “I was amazed at how good my body started to feel,” she said. When she returned to work and began pushing and pulling the two carts, her neck and shoulder aches came back like old friends.

Nurses at most hospitals face the same dilemma. When the team meets colleagues from other facilities in online forums to share information, “How do you guys transport ultrasound equipment?” is a common question.

The same way you do, is usually the response. By rolling heavy equipment around.

“There’s really no way to condense it any better,” Soulier said. The team needs the lines, probes, masks and everything in the cabinet.

Penn State Engineering’s early efforts resulted in a different prototype that turned out to be too top-heavy. NVAT then turned to a New York-based manufacturer called Ergo Express, which took the handoff from Penn State and modified their motorized cart design to meet the needs.

At the moment, Hershey Medical Center only has one cart. Whichever team member has the most stops on a given shift gets to use it.