From bats to TMI, veteran nurse educator has seen it all 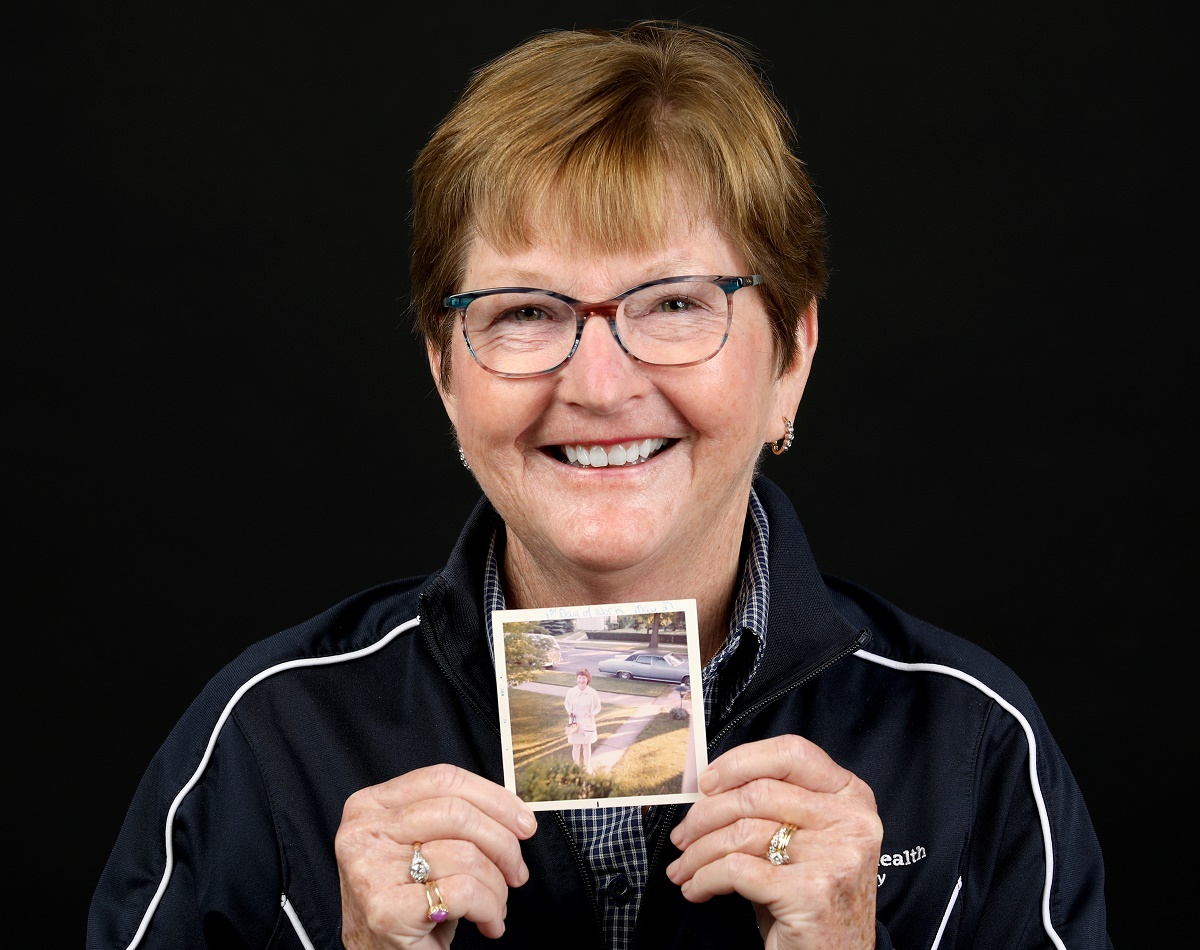 Janice Mills holds a photo of herself from her first year as a nurse at Hershey Medical Center in 1974.

Hershey Medical Center is celebrating its 50th anniversary this month. We mark the milestone with the third in a series of four profiles on employees who share what makes the medical center special to them.

Fresh out of nursing school 46 years ago, city girl Janice Mills vividly remembers the bats that joined expectant fathers in the waiting room outside labor and delivery, thanks to constant construction in the operating room and Emergency Department areas.

“At night, it got really interesting,” said Mills, who grew up in Philadelphia, did clinicals in New York City and started working in women’s health at Penn State Health Milton S. Hershey Medical Center in 1974. “I remember calling security about the bats, and when I gave report to the nurses coming on the next morning, everyone made fun of me. They could tell I wasn’t a country girl.”

The country air – and the opportunities at the Milton S. Hershey Medical Center – have been to her liking, however, because she’s stayed for more than four decades.

“I wanted to be at an academic medical center because I thought there would be so many opportunities, and I was right,” said Mills, who earned her master’s degree from Penn State in 1980 and became a clinical nurse educator.

The Hershey resident has been a witness to many of the Medical Center’s milestones and has countless memories of national events that happened here in Derry Township.

She remembers Army jeeps, inbound from Fort Indiantown Gap, bringing four or more laboring mothers at once – Vietnamese refugees who came to the area after the Vietnam War. “We were used to getting the complex births, but not a high volume all at once,” she said. “These precious women couldn’t speak English, and we had no phone to pick up for an interpreter in those days.”

When she was five months pregnant, she remembers coming to work in the days after the Three Mile Island nuclear accident as local and federal emergency management officials grappled with their response.

“I was a gynecologic oncology nurse then, and our cancer patients kept coming for chemotherapy. It was a very nerve-wracking time,” Mills said, noting that the Medical Center made plans for an evacuation that ended up not being necessary.

Rising to the challenge

The mid-1980s again brought uncertainty and new procedures due to HIV/AIDS, and this year’s upending of routines due to COVID-19 brings back memories of those previous challenges, she said.

In 1997, she endured the Medical Center’s merger – and subsequent demerger – with Geisinger Health System, and she lost her job in the aftermath before taking an open position as a training specialist in Human Resources.

It would be 10 years before she returned to her post as nurse educator, this time traveling to the Medical Center’s growing number of practice sites.

“Being a part of the history and excitement has made me proud to work at a great institution like this,” said Mills, who covers seven Penn State Health Medical Group practice sites in State College and teaches continuing education courses for some 70 practice sites. “The growth of ambulatory care has also been exciting. We’re seeing sicker patients and proving we can take care of complex cases and be a huge support to the hospital.”

Mills is grateful for other opportunities that have helped her touch a great number of lives through teaching, such as launching the weeks-long orientation for the first Life Lion team in 1986 and going on the road to conduct trainings that educate community health care partners in better cancer care for patients.

“I love teaching, and I have a real heart for employees,” she said. “The better the employee, the better care our patients get.”

Behind the Scenes on the Front Lines: Environmental Health Services