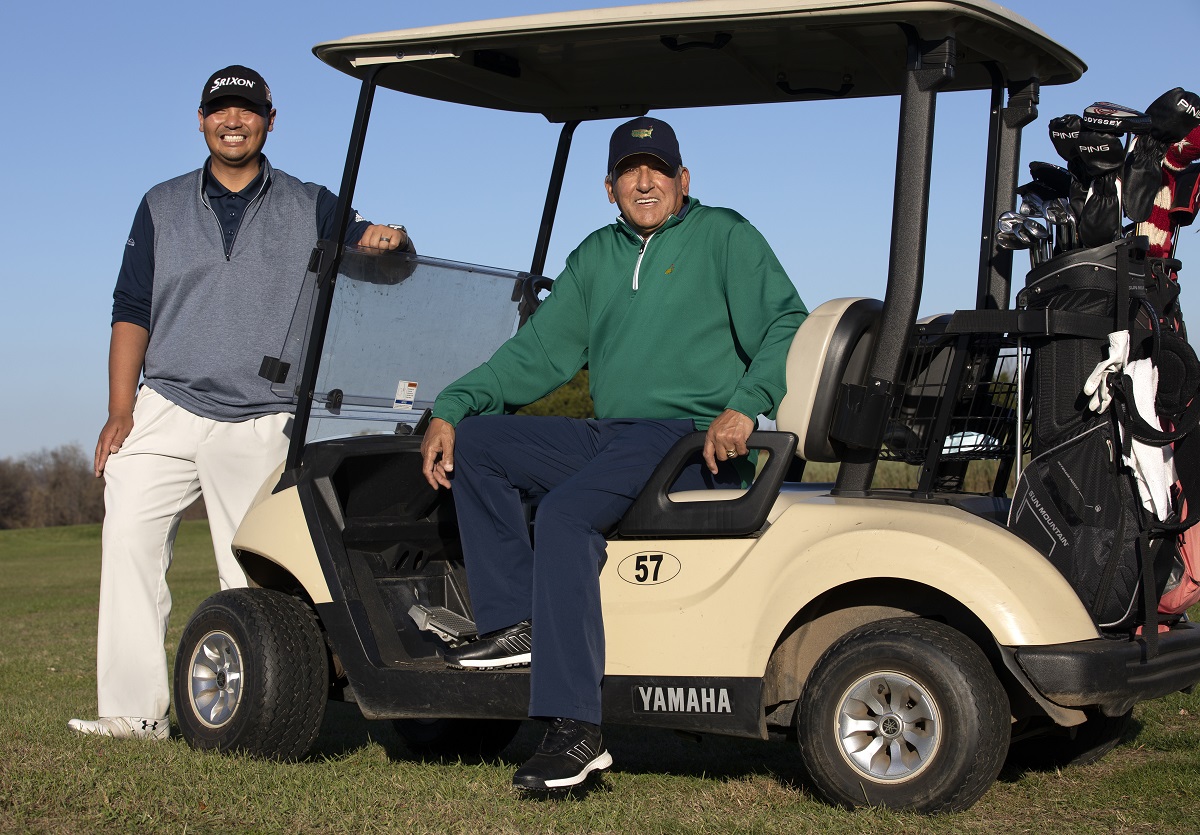 Abdul “Cappy” Ishaq, right, and Ryan Gregorio, a registered nurse at Hershey Medical Center, reunite for a round of golf.

Abdul Ishaq is quick to tell anyone that golf is his life, but last month, the game may have actually saved it – with help from another golfer a few holes behind him.

Ishaq, known to his friends as “Cappy,” was golfing in a tournament on Oct. 18 at Sunset Golf Course in Middletown, when he suddenly collapsed. Ryan Gregorio, also a player in the tournament, saw him go down.

“It was definitely a case of being in the right place at the right time with the right training from all of my years of being a stroke nurse,” said Gregorio, a neurovascular interventional radiology nurse at Penn State Milton S. Hershey Medical Center who has previous neurological nursing experience.

Had he been anywhere else but the golf course, his story might have a much different ending, said Cappy, who has loved playing golf since his teenage years growing up in Uganda before coming to the U.S. as a refugee in 1972.

Seeing Cappy collapse, Gregorio leapt into his golf cart and sped to the scene, jumping off while the cart was still moving. Onlookers thought Cappy had been hit by a stray golf ball, but Gregorio immediately began assessing him.

“He had such a look of fear on his face when I asked him his name,” Gregorio said. “At first he said nothing and then he said, ‘Ca-ppy’ in very slow speech. I asked him to squeeze my fingers and he barely squeezed with his right hand, and when I raised his right leg and then right arm, they went limp right away. I yelled, ‘Someone call 911. He’s having a stroke.’ I had no doubt.”

Gregorio and another golfer lifted Cappy into the golf cart, and Gregorio drove to the parking lot to meet the ambulance. While they waited, Gregorio evaluated Cappy on a modified National Institutes of Health Stroke Scale, a tool used to assess various stroke deficits, and was able to give valuable information to the ambulance crew.

Quick action got the Hummelstown resident to the Milton S. Hershey Medical Center and access to tissue plasminogen activator, or tPA, within about an hour.

It’s the only FDA-approved treatment for an acute ischemic stroke, which is caused by a blood clot interrupting blood flow to a region of the brain. tPA works by dissolving the clot and improving the circulation. It is time-dependent—the sooner it’s started, particularly during the first hour after stroke onset, the more likely the patient will have a good clinical outcome.

All the critical factors needed – from early recognition of symptoms and prompt EMS transport to the hospital to earliest possible tPA – fell into place, he said.

“The teamwork process from beginning to end is critical,” Reichwein said. “This is an excellent example of what occurred in Mr. Ishaq’s case, and it led to a great clinical outcome.”

A week later, anyone talking to Cappy would never guess he suffered a stroke such a short time ago – or that he had temporarily lost his ability to speak or use his right side. All that began to return within 30 hours after tPA treatment. Four days later, Cappy was home, recalling how his life was saved on the golf course that is his second home.

“I remember tripping at the third hole, getting up to make a putt and going straight down,” said Cappy, who also recalls having a slight headache that Sunday morning. “I remember all the guys around me, talking to me, but I couldn’t talk back.”

But most of all, Cappy remembers Ryan. “All of sudden, Ryan, my angel came to my rescue,” he said.

The two reunited in Cappy’s hospital room amid tears. “I thanked him and told him if it weren’t for COVID, I’d give him a big hug,” Cappy said. “Ryan said, ‘It’s just my job,’ but I think it’s unbelievable there was a guy like that right there who knew what to do.”

In fact, Gregorio almost wasn’t there. Earlier in the week when he first approached Cappy to sign up for the tournament, it was full, but Cappy – who works part time in the golf pro shop there – said he would let Gregorio know if someone cancelled. Not 15 minutes later, someone did.

“Everything happens for a reason,” Gregorio said. “It’s like I was meant to be there.”

Cappy, his wife, sons and grandchildren couldn’t agree more. “I will never forget that boy,” Cappy said. “I told him our next game of golf is on me.”

Gregorio was all in for that – and the pair played last week – but he added, “It was just one human being helping out another human being – that’s what we’re supposed to do, right?”

Local kidney donor inspires others to give life with winning design