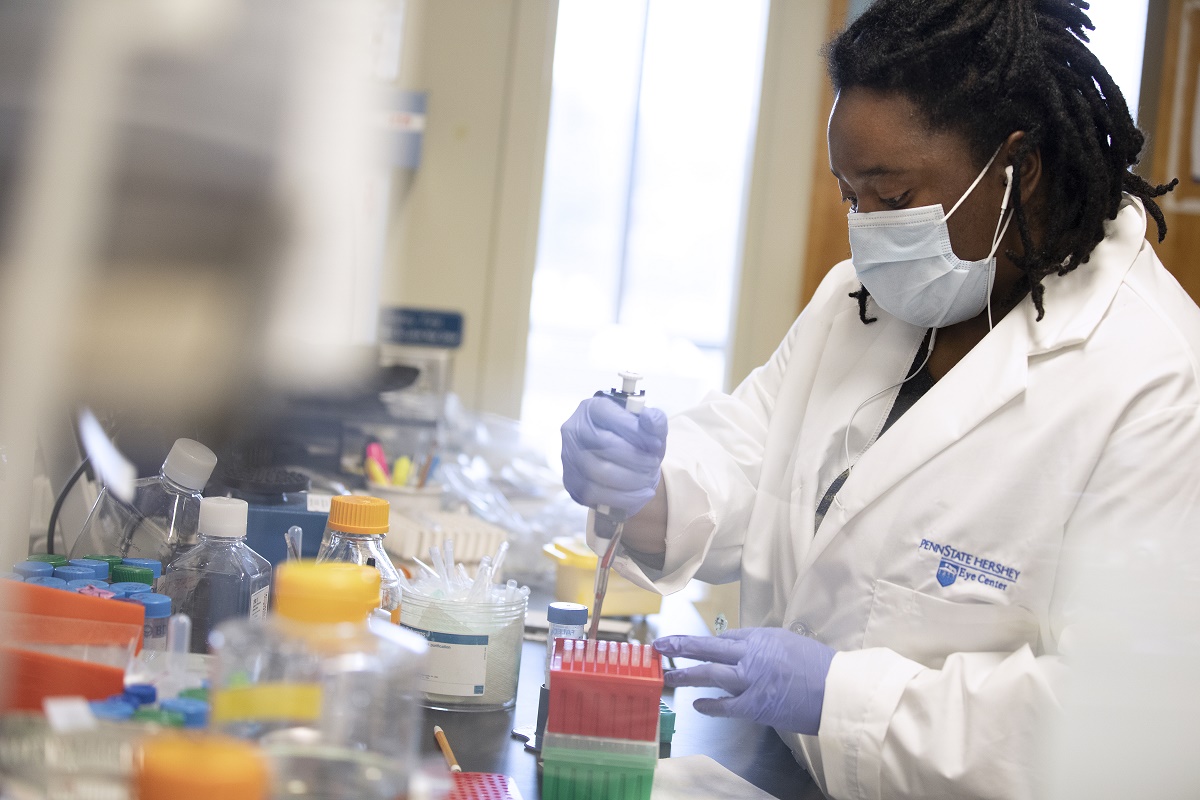 Jasmine Geathers is a PhD/MD student at Penn State College of Medicine who was part of the college’s pipeline program that helps underrepresented students become doctors.

Jasmine Geathers remembers talking to a professional at a conference who gave her startling advice.

“They really tried to discourage me,” said Geathers, recounting how surprised she was as her acquaintance began listing the reasons why she should not pursue a PhD while also attending medical school.

Today, Geathers is halfway through the eight-year MD/PhD program at Penn State College of Medicine and researching macular degeneration.

Her story is not unique for minority students. Many hear discouraging words when they talk to family, teachers and even advisors about medical school. Others struggle to find out what steps to take to become a doctor.

Geathers is fortunate. Her mother, who raised her in a Chester, Pa., neighborhood blanketed by poverty, encouraged her. But she has friends whose parents did not appreciate the importance of a good education and wanted their children to step from high school graduation right into a paying job.

“When you’re surrounded by people who don’t understand the importance of going to college, you don’t do it,” said Geathers. “Getting an education, let alone becoming a doctor, just seems like a dream.”

She is program director of the diversity pipeline programs in the Office for Diversity, Equity and Inclusion at the College of Medicine and Penn State Health.

Nieves helps create pathways for underrepresented students to increase their educational opportunities. Part of the effort is to foster partnerships with students who are underrepresented in medicine – Black, Latinx, Native American, LGBTQ, students with disabilities and those who are the first in their family to go to college.

“Our goal is to change the face of health care providers so it mirrors the populations they are serving,” said Nieves. “Hopefully, by increasing the diversity of medical providers, health care disparities will decrease.”

The College of Medicine has a number of ways it is reaching undergraduates, helping them see themselves as medical school students and, ultimately, doctors. The “Talks with Docs” program, for example, started in the fall of 2018 and allows undergraduates to hear firsthand from minority physicians on how they navigated their education and career.

“This is important because they can see themselves through these doctors, ask questions and even talk about how to handle discrimination,” Nieves said.

“Talks with Docs” and other programs are offered specifically to schools with which the College of Medicine has established partnerships. Currently, they include four historically black universities: Lincoln University in Pennsylvania, Jackson State University in Mississippi, Xavier University in Louisiana – which Geathers attended ― and Hampton University in Virginia.

Penn State College of Medicine is working to establish a partnership with a school in Colorado that largely serves Native American students in an effort to increase the number of Native American health care providers. The college hopes to develop similar arrangements with schools with large number of Hispanic/Latinx students to increase health care providers within this population as well.

Inspiration to become a doctor

Nonyelum Ibik grew up in Laurel, Md., and attended Lincoln University. Because of the pipeline programs, she was able to navigate her way to medical school. She frequently travelled to Penn State main campus for mentorship programs and events where she was paired with a minority medical school student so she could ask questions. Today, Ibik is a second-year medical school student at the College of Medicine in Hershey studying to be a gynecologist/obstetrician. She also is president of the Student National Medical Association. After earning her medical degree, she plans to work in an underrepresented community.

Both Ibik and Geathers thought about becoming a doctor at an early age. Geathers remembers as a ninth grader watching a cartoon in which one of the characters was a black doctor. The idea of a black woman becoming a physician had never occurred to her until then, and it stuck. For Ibik, it was a conversation she had with her mother when she was a third grader. As they walked to church, she told her mom she liked science, and her mom replied that she might want to become a doctor.

Even though they had family support, it took mentors, help paying for preparatory courses and the pipeline programs at Penn State to get them to medical school.

“It really helps to be around people who care and help you find internships and opportunities,” said Ibik. “I’m glad I’m here because minority physicians, especially women, are needed.”