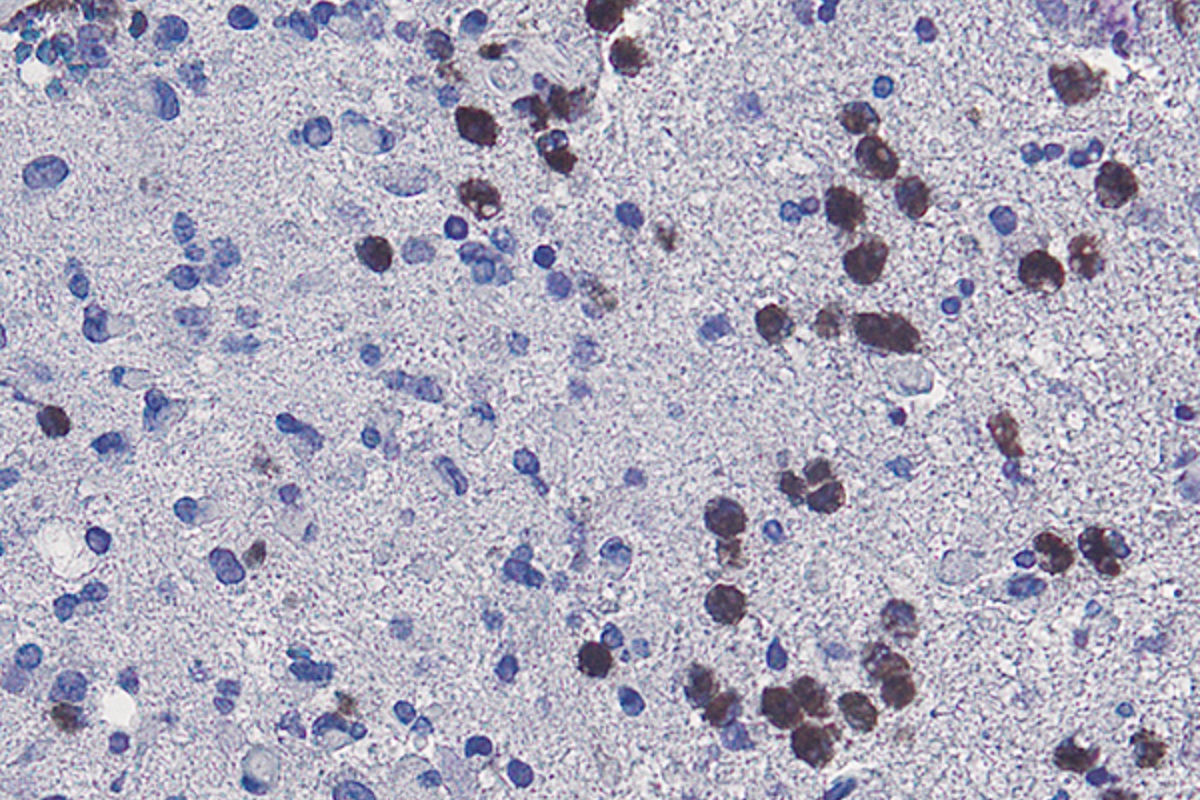 Neutrophils, stained brown, are visible in a human glioblastoma tissue sample, where tumor cells are stained in blue.

White blood cells are part of many immune system responses in the human body. New research shows that a specific type of those cells may cause brain cancer tissues to die – but that’s not good news, according to researchers at Penn State College of Medicine and Penn State Cancer Institute. They said that higher amounts of this tissue death have been associated with poor survival in patients with aggressive glioblastomas, a deadly type of brain cancer that is common in adults.

Wei Li, assistant professor of pediatrics and biochemistry and molecular biology, studied the causes of this tissue death, called necrosis. Scientists have suggested that a lack of oxygen due to poor blood supply from rapid tumor growth may cause necrosis, but Li and a team of researchers investigated the molecular processes that cause this tissue death to occur. Their findings were published in Nature Communications.

“Glioblastoma patients with higher degrees of necrosis have a poor chance of survival,” Li said. “We hope insight into the processes that drive this tissue death can help us develop new therapeutics to improve outcomes for these patients.”

Li and the research team, including medical scientist training program student Patricia Yee, found that ferroptosis, a specific type of regulated cell death, caused tissue death. They examined tumor tissue samples from animal models of glioblastoma under a microscope and found that neutrophils, a type of white blood cell, were present in the same areas as dead tumor cells.

To establish whether these cells were part of the tissue death process, they decreased the amount of neutrophils in animal models, which then decreased the amount of necrosis in those cancer models. They also isolated these white blood cells and tested them against cancer cells in a lab and found that the presence of neutrophils prevented the cancer cells from thriving.

“We confirmed our theory on the role of neutrophils in necrosis by evaluating glioblastoma patient data,” Li said. “A high number of neutrophils and the presence of genetic signals of ferroptosis were associated with pathological evidence of necrosis and predicted poor survival in patients.”

Although they had a better idea of the key factor driving the tissue death, Li and colleagues were unsure why the tissue death was beneficial to tumor progression. They studied glioblastoma patient data sets and found that the dead cells secrete molecular signals that may help tumor cells grow.

Li said future studies will investigate how the white blood cells that spur on the tissue death arrive at the tumor to begin with. He suspects that tissue damage from the tumor growth may be causing the neutrophils to arrive, but that further studies are needed. He also said more research is needed to better understand how necrosis promotes cancer growth.

“If we can develop therapeutic approaches for preventing necrosis, there’s a chance those tumors might be less aggressive, which could be beneficial to glioblastoma patients,” Li said.

This research was supported by the National Institutes of Health. The content is solely the responsibility of the authors and does not necessarily represent the official views of the NIH.

The authors declare no conflicts of interest.