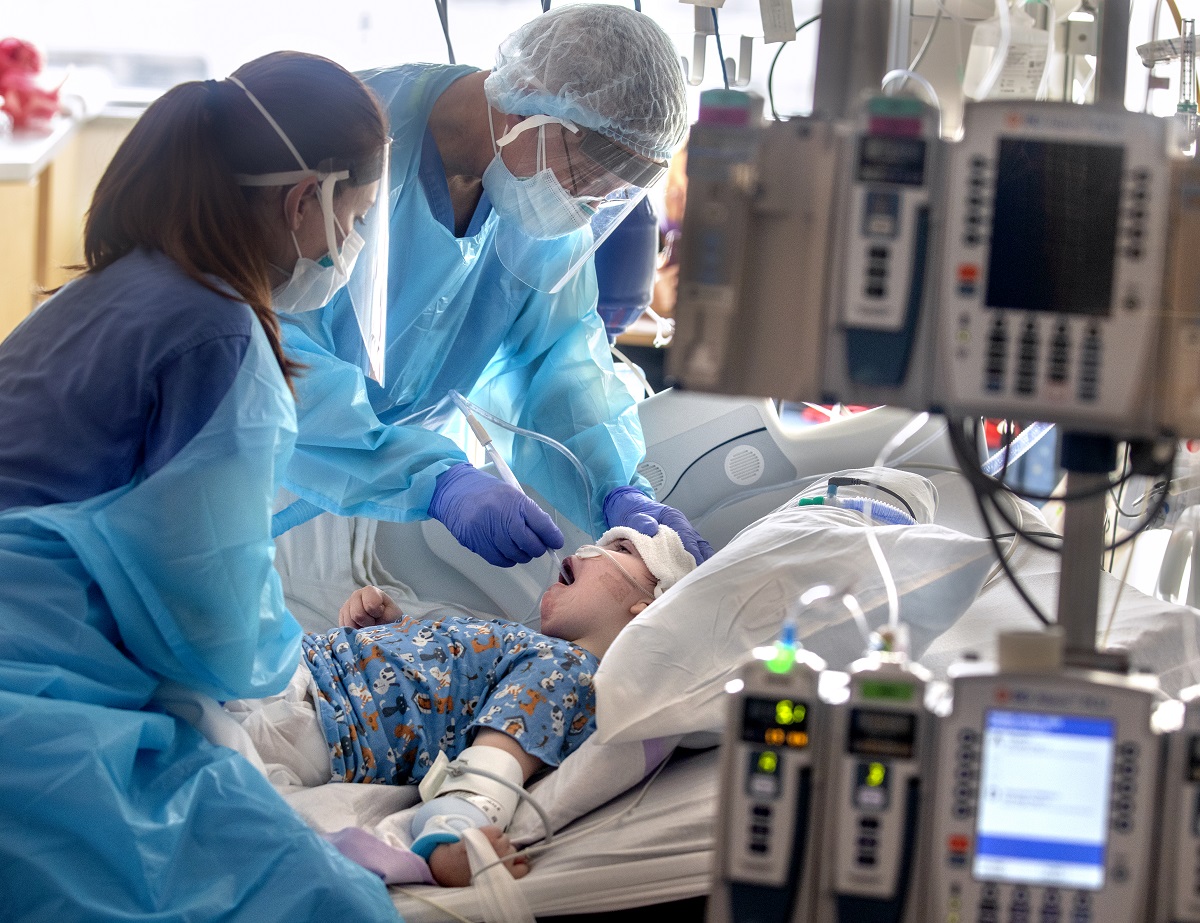 With assistance from registered nurse Megan Davison, left, respiratory therapist Dale Carl helps clear excessive mucus from the lungs and mouth of Douglas Graham during a therapy session with the 8-year-old COVID-19 patient.

Earlier this year, Karen Graham finally learned the name of the mysterious, rare disease that has been plaguing her son, Douglas, since he was born eight years ago.

Then, in early December, another disease came calling. It’s just as mysterious, but its name conjures nightmares the world over – COVID-19.

Douglas already suffers from Lesch-Nyhan syndrome, a genetic disorder that causes him to inflict harm upon himself. It has confined him to a wheelchair and robbed him of the ability to talk. There’s no cure.

When the pandemic struck, Karen worried. Douglas has a weak immune system, and chronic lung problems were part of the litany of symptoms he experienced as a baby.

When he started vomiting on Dec. 4, she prayed it was just a stomach bug, but got him tested anyway. Four days later, when she put him down to sleep, he stopped breathing. Karen called an ambulance, which took him to Chambersburg Hospital. That night, she received the phone call with the test result she already knew.

The next day, another ambulance took him to Penn State Health Milton S. Hershey Medical Center, where doctors hooked him up to machines to help him breathe. Karen never left his side, sleeping on a couch in his room.

They joined a small, but tragic collective. While the popular narrative has it that the pandemic is primarily an old person’s disease, 49,179 children in Pennsylvania have contracted COVID. One-hundred-sixty-six have come through Hershey, from infants to 18 year olds. And though the statistics may be less grim for children than adults, the tangents lead down dark corridors. Health care workers say eating disorders requiring inpatient stays have spiked among youngsters. Suicide attempts are skyrocketing among children. And a rare, potentially fatal illness doctors are still struggling to understand occurs almost exclusively in children and young adults who had COVID.

“The reality is, it’s affecting everyone,” said Jessica Masgay, a nurse manager in the Pediatric Intensive Care Unit. The Penn State Health doctors, therapists and nurses tasked with handling the crisis and its effects on children work hard to lift spirits – both patients’ and families’ – all while grappling with their own emotional wear as the pandemic lumbers on into 2021. 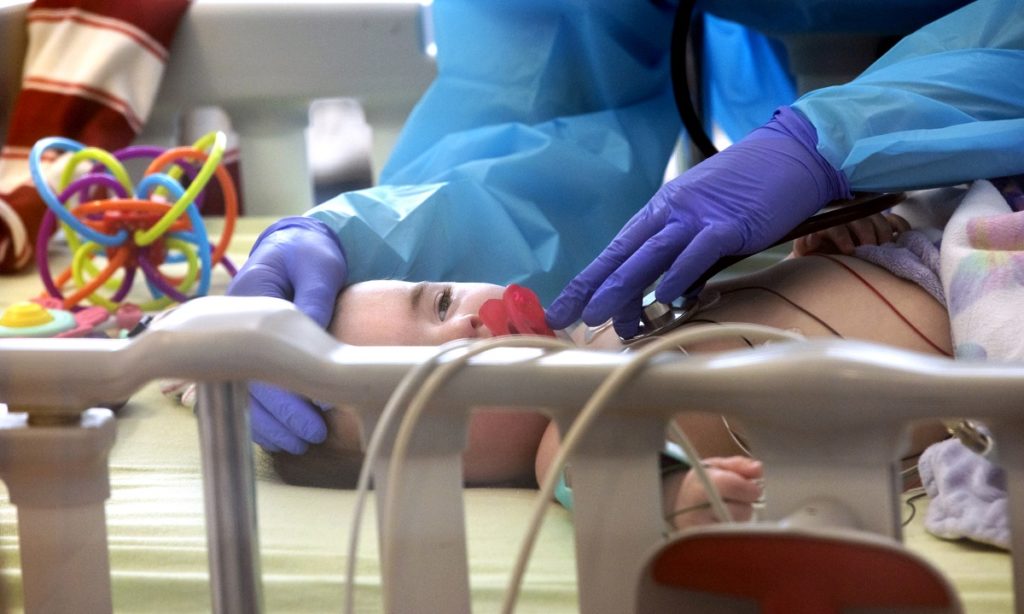 Pediatric health experts at Penn State Health Children’s Hospital are uniquely equipped to help. Just down the hall, researchers from the region’s only academic medical center are part of the campaign to stop COVID. The Children’s Hospital is a national leader in quality, evidence-based care for children from birth through age 21.

On Tuesday, Dec. 15, Douglas was one of only three pediatric inpatients with COVID at the Children’s Hospital and was the only one in the PICU. The most pediatric COVID patients in residence at one time so far has been nine.

Only the patient was different. No long arms or legs spilled over the sides of the bed. Instead, small appendages were capped with tiny fingers and toes.

As Respiratory Therapist Dale Carl and Registered Nurse Megan Davison worked over him, Douglas’s leg rocketed out of the blankets and pelted them with kicks. He flailed so much they had to secure his arms. They wrapped him in a vest and wrestled masks to his grimacing face. Hoses hooked the vest to a shuddering machine the size of a computer printer.

“It’s usually not like that,” Carl said, doffing his PPE when emerged a moment later.

They were trying to get Douglas to expectorate the mucus that days before troubled his breathing. The vest emitted puffs of air that shook Douglas’s body, loosening the materials in his chest. They also snaked catheters down his nose and throat all to break up the fluids most people can dislodge by coughing.

It’s a common treatment both children and adult patients with comorbidities. The difference this time was that Douglas’s underlying illness makes him lash out sometimes. Nearly all the children who wind up in pediatric intensive care with COVID-19 have some underlying condition. Others contract COVID, but “don’t get hospital sick,” Davison said.

At least not at first. More than 1,200 children in the U.S. have developed another new illness after COVID, Multisystem Inflammatory Syndrome – Children (MIS-C). Organs – including the heart, lungs, kidneys, skin, eyes, gastrointestinal organs and brain – can become inflamed. The disease is serious, potentially fatal, and doctors still don’t know the cause – only that it’s linked somehow to the pandemic. Six children with MIS-C have been admitted to Hershey.

“People ask me if I’m seeing lots of cases of COVID and horrible symptoms,” she said. “’No,’ I tell them, ‘I’m seeing awful mental health.’”

Eating disorders have become rampant, she says. Patients as young as nine years old have come to Hershey suffering from anorexia or bulimia. The cause isn’t a physical symptom. It’s a side effect, part of a national crumbling of families and psyches brought on by isolation and quarantine.

Some of the children who arrive for mental health emergencies require inpatient care at a psychiatric institution. They can’t leave until they receive two negative tests for COVID. Their departures are further delayed by the lack of available space at such facilities around the state. Sometimes, they have to travel far from home for care or become stuck waiting for weeks and weeks.
Point at the image below to reveal slideshow player controls. 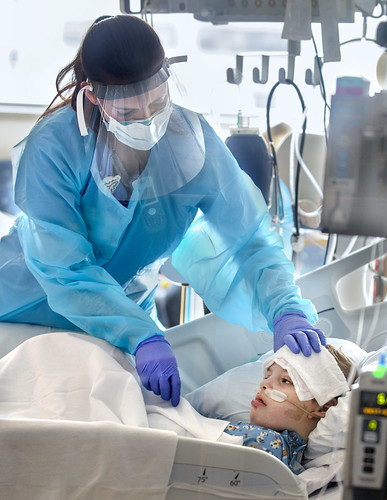 “Nurses just hang out with them,” Truett said. They can’t always stand beside the bed of someone isolated in a negative-pressure room, but nurses call them on their bedside phones. The Child Life Program at Penn State Health Children’s Hospital jumps in as much as they can.

The isolating nature of the illness is an aberration for pediatric care professionals, said Amanda Kells, a nurse manager in the Pediatric Intermediate Care Unit. To safeguard against the spread of the illness, health care workers have had to limit the number of family members who are permitted to visit. In the non-COVID word, the best-case scenario for caring for a juvenile involved the entire family. Recently, Kells said, set of twins who had been together every day since birth couldn’t be in the same room when one of them became ill.

“It goes against what pediatric nursing is,” Kells said. “The family is so much a part of what we do.”

The emotional toll has been a challenge, but as pediatric nurses help their families navigate through the pandemic, they’re banding together. “I can’t say enough positive things about the way our teams have adapted to our new environments and their consistent dedication to our patients and families,” Masgay said.

After watching Douglas undergo his respiratory therapy, Karen knelt next to the bed and murmured to her son. When she touched his thrashing legs, they slowed and he laid still.

Doctors eventually removed tube that had been helping Douglas breathe. “He’s doing better now,” she said over the phone from the couch in his room. A week later they went home.

The day Douglas left, an ambulance brought in Lily Valentin-Hower. The 9-month-old was born with a rare genetic mutation which causes her to have seizures. Three days before Christmas, something triggered one.

Her father, Dillion Hower tested positive for the virus a few days before. Her mother, Juliely Judge’s, COVID test results are pending, but she’s sure she has it.

Juliely gave birth to Lily in March when the pandemic had just begun to peak.

Lily had her first seizure three weeks later. She’d stopped breathing. Her body had become stiff. An ambulance brought her to Hershey Medical Center. She had another seizure in June.

Juliely broke down. The possibility that the virus that seemed to be making half the planet ill might sicken her baby was like a nightmare.

“It’s terrifying,” she said from her daughter’s room at in the Pediatric Intermediate Care Unit the next day. “If anyone tells me COVID doesn’t have any effect on children, I will tell them firsthand – it does.”

Within a day, doctors cleared Lily to return home in time for Christmas.

But then the family was back in the hospital on Dec. 26. That day, COVID-19 caused Lily to have three more seizures.

She returned home again, and in early January and hadn’t had a seizure in a few days.

Juliely says she’s thankful for the care she received.

“I love Hershey Medical Center pediatrics,” she said. “Ever since the first time we came here. … everyone here does everything they can to help.”