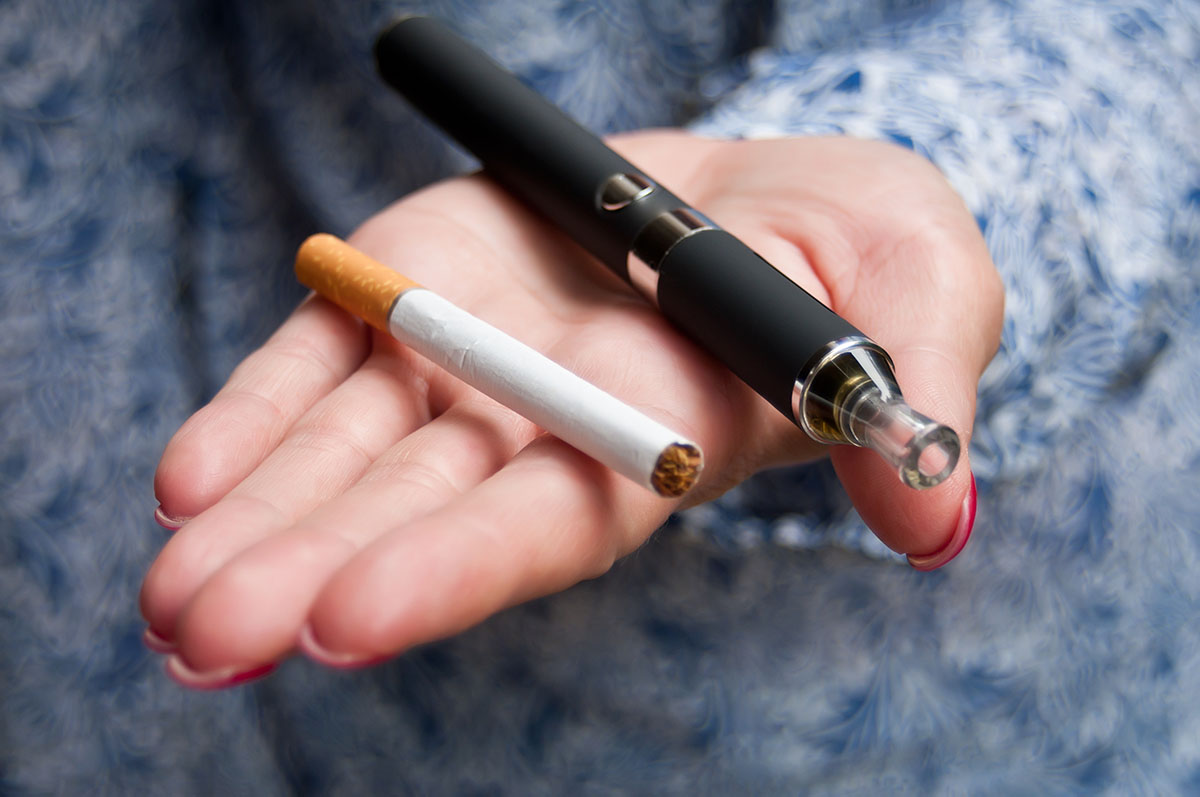 E-cigarettes that deliver a cigarette-like amount of nicotine are associated with reduced smoking and reduced exposure to a major cancer-causing chemical, or carcinogen, in tobacco, even with concurrent smoking, according to a new study led by researchers at Penn State College of Medicine and Virginia Commonwealth University (VCU). The study provides new and important information for smokers who may be trying to use e-cigarettes as a means to cut down on their smoking habit and lower their exposure to harmful toxicants.

“We found that e-cigarettes that delivered a similar amount of nicotine as traditional, combustible cigarettes helped reduce smoking and exposure to a harmful carcinogen,” said Jonathan Foulds, a researcher at Penn State Cancer Institute and professor of public health sciences and psychiatry and behavioral health. “This study shows that when smokers interested in reduction are provided with an e-cigarette that has cigarette-like nicotine delivery, they are more likely to achieve significant decreases in tobacco-related toxicants, such as lower exhaled carbon monoxide levels.”

The researchers conducted a randomized controlled trial of 520 participants who smoked more than nine cigarettes a day, were not currently using an e-cigarette device, and were interested in reducing smoking but not quitting.

Over 24 weeks, participants used an e-cigarette device filled with either 0, 8 or 36 milligrams per milliliter of liquid nicotine or a plastic tube (shaped like a cigarette) that delivered no nicotine or aerosol. The e-cigarette conditions were chosen to reflect a range of nicotine delivery: either none, low (8 mg/ml) or cigarette-like (36 mg/ml). The participants were also provided with smoking reduction instructions.

At weeks 0, 4, 12 and 24, the researchers sampled participants’ urine, testing for the tobacco-specific carcinogen 4-(methylnitrosamino)-1-(3-pyridyl)-1-butanol, also known as NNAL. They found that participants using e-cigarettes filled with the cigarette-like level of liquid nicotine had significantly lower levels of NNAL at week 24 compared to baseline and compared to levels observed in the non-e-cigarette control condition.

According to Foulds, the findings represent an important addition to the scientific literature because they suggest that when e-cigarettes deliver nicotine effectively, smokers have greater success in reducing their smoking and tobacco-related toxicant exposure. Caroline Cobb, associate professor of psychology at VCU and lead author, said the study is important for two reasons.

“First, many e-cigarettes have poor nicotine delivery profiles, and our results suggest that those products may be less effective in helping smokers change their behavior and associated toxicant exposure,” Cobb said.

The question of whether an e-cigarette’s nicotine delivery profile is predictive of its ability to reduce harm and promote behavior change among smokers remains highly relevant to policymakers, public health advocates, health care providers and smoking populations. That knowledge will lead to better designed studies of the potential harms and benefits of e-cigarettes and ultimately inform tobacco regulatory policy, Cobb said.

Foulds said the study contributes to the ongoing question of what role e-cigarettes play in changing smoking behavior. Additionally, the study’s findings support limited safety concerns for the use of the specific e-cigarette and liquid combinations over the short term, even in the context of concurrent cigarette smoking. However, Cobb added, very little is known about the effects of e-cigarettes over the course of years, as opposed to the study’s 24-week period.

The study, “Effect of an Electronic Nicotine Delivery System with 0, 8, or 36 mg/ml Liquid Nicotine Versus a Cigarette Substitute on Tobacco-Related Toxicant Exposure: a Randomised Controlled Trial,” was published in Lancet – Respiratory Medicine.

Jessica Yingst and Susan Veldheer of Penn State College of Medicine; Alexa Lopez of University of Wisconsin-Milwaukee; Christopher Bullen of University of Auckland in New Zealand; Thomas Eissenberg, Le Kang and Miao-Shan Yen of Virginia Commonwealth University were also co-authors on this research.

This research was supported by the National Institutes of Health and the U.S. Food and Drug Administration. The content is solely the responsibility of the authors and does not necessarily represent the official views of the NIH or FDA.

Jonathan Foulds has done paid consulting for pharmaceutical companies involved in manufacturing smoking-cessation medications (e.g., Pfizer, GlaxoSmithKline, Johnson & Johnson); and has acted as a deposed and compensated expert witness on behalf of plaintiffs suing cigarette manufacturers. None of the study authors have accepted funding from tobacco or electronic cigarette manufacturers.