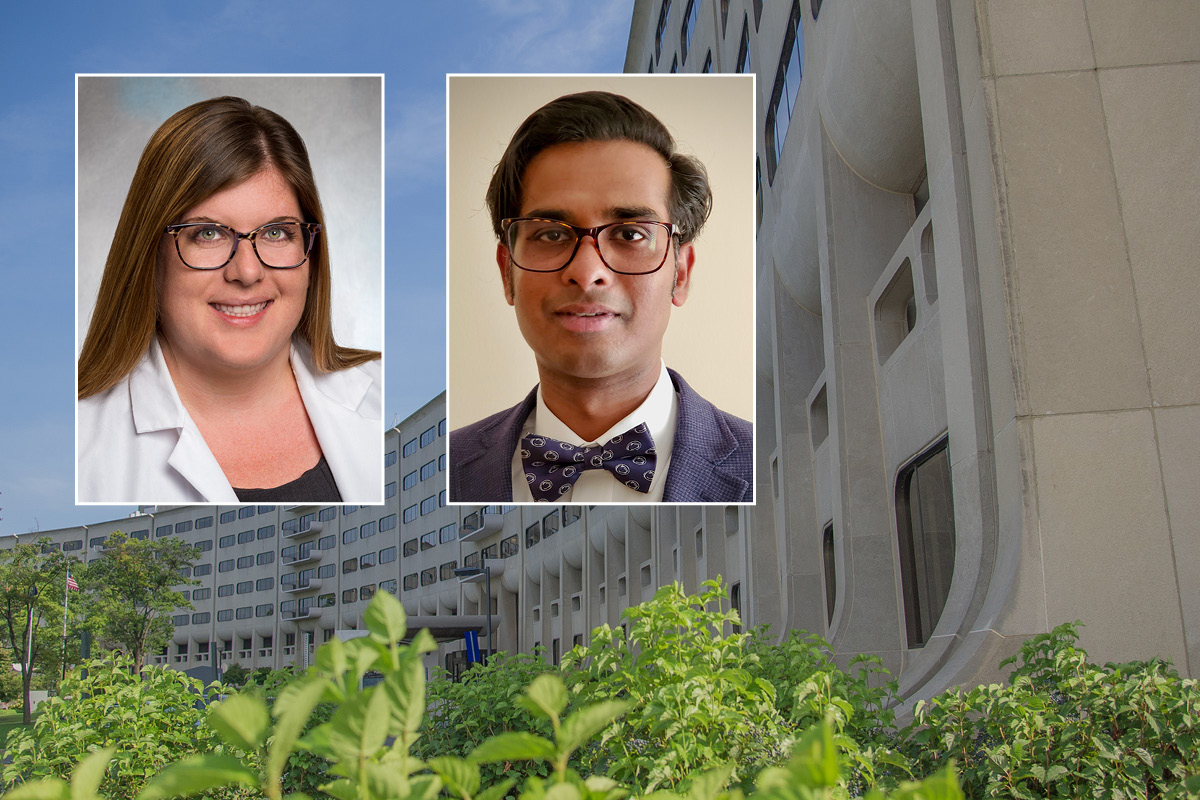 Two recent Penn State College of Medicine graduates are among the honorees of the Penn State Alumni Association’s Alumni Achievement Awards, which were celebrated on April 13.

The award recognizes alumni 35 years of age and younger for extraordinary professional accomplishments. Approximately 10 graduates are honored each year.

Dr. Allison Cleary, a 2016 alumna, is the first graduate of the College of Medicine’s MD/PhD medical scientist training program to receive the honor. She is a pathologist and chief resident in anatomic pathology at Brigham and Women’s Hospital in Boston.

Dr. Balaji Krishnaiah, a 2017 alumnus, is the College of Medicine’s first resident graduate to win an Alumni Achievement Award. He is assistant professor of neurology, course director of neural and behavioral science for medical students and associate program director of the neurology residency program at the University of Tennessee College of Medicine and University of Tennessee Health Science Center.

Krishnaiah’s work focuses on vascular neurology — treating patients with stroke — and he is passionate about teaching medical students and residents.

“It took a village to get me to where I am today,” Krishnaiah said during the virtual ceremony. “Penn State not only trained me to be a good neurologist but also nurtured me to be a leader in neurology.”

Dr. Max Lowden, associate professor and vice chair for education in the Department of Neurology, Division of Neuromuscular Medicine, said Krishnaiah always aspires to reach new levels in his learning and profession. Lowden trained Krishnaiah and nominated him for the award.

“Bala is bright, mature, hardworking, motivated and focused,” Lowden said. “He is a knowledgeable neurologist with excellent clinical, team leadership and teaching skills.”

Krishnaiah has received multiple teaching awards at the University of Tennessee, including two faculty teacher of the year awards and best second-year course director. During his residency at the College of Medicine, he was awarded four separate excellence in teaching awards by medical students. He is also the 2020 recipient of the A.B. Baker Award, the highest recognition in teaching given by the American Academy of Neurology.

Cleary has spent her career challenging long-held theories about the origins of breast cancer tumors. Her contributions include providing insight into pathogenesis of rare and complex types of breast cancers, integrating artificial intelligence algorithms into her research and participating in the creation of a center of excellence for the treatment of non-lactational mastitis, which will hopefully lead to new therapies.

Early in her career as a trainee at the College of Medicine, Cleary’s pioneering breast cancer research led to her being named the 2015 Science & SciLifeLab grand prize winner, an international award that recognizes groundbreaking life-science research. Her work was featured on the cover of the research journal Nature.

Dr. Edward Gunther, physician/scientist in the Department of Medicine, Division of Hematology and Oncology, and Penn State Cancer Institute, mentored Cleary and recommended her for the award.

“Allison Cleary is gifted with more innate curiosity than anyone else I know,” Gunther said. “She’s fearless when choosing a research question and meticulous when mapping out her scientific approach. I view her continued success as a physician-scientist as inevitable.”

During the virtual ceremony Cleary said she talked about her experience at the College of Medicine.

“Between medical school and graduate school, I spent nine years at Penn State, and I can honestly say they were far and away the best of my life,” she said. “I honestly wouldn’t trade my time at Penn State for anything in the world, and I feel so fortunate to continue to be part of this Penn State family.”

Home away from home: Every member of the Diaz family has worked for Holy Spirit