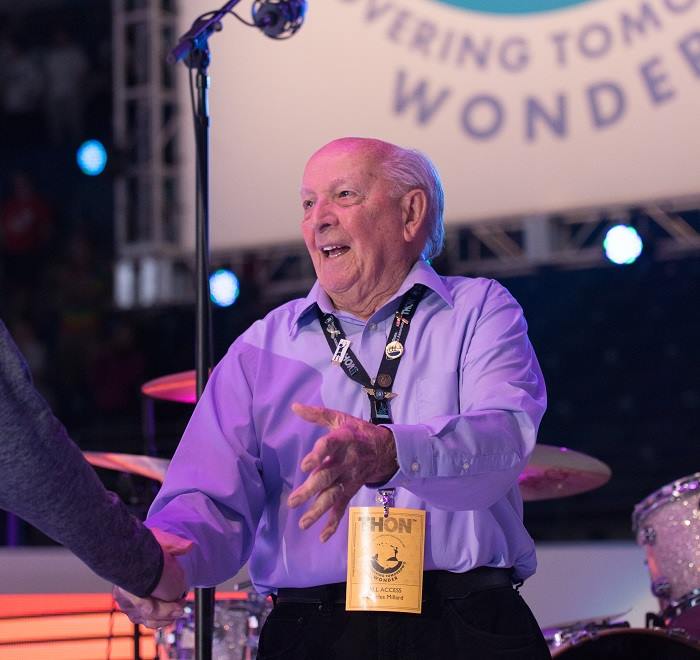 Charles Millard, co-founder of Four Diamonds, died this morning (Nov. 4) in Washington state of a brain injury resulting from a fall he suffered hours earlier. He was 93. A memorial service to celebrate his life will be planned, with details shared at a later date.

“Charles was humble, thoughtful, caring and good humored,” said Suzanne Graney, executive director of Four Diamonds. “He was a gentleman in every sense of the word. I cherish the wonderful memories I have of him. He and his family have inspired me throughout my time at Four Diamonds, and it is a privilege to continue the important work Charles and Irma began.” 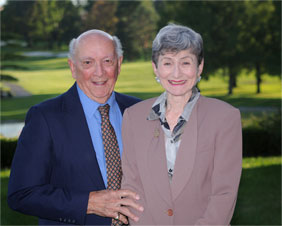 Charles and his wife, Irma, co-founded Four Diamonds in 1972, following their son Christopher’s nearly three-year battle with cancer. Their intention was to help other families whose children were fighting cancer at what is now Penn State Health Children’s Hospital.

In 1977, Charles traveled to State College with a development officer to participate in a radio program aired on the Penn State student radio station. Fortuitously, one of the students involved in the radio program also was involved in the Penn State Dance Marathon (THON). As a result of that connection through the radio program, Four Diamonds was selected as the beneficiary of all proceeds from the 1977 event and soon after became the sole beneficiary of all THON proceeds. Millard had previously described THON as, “love at first sight.” 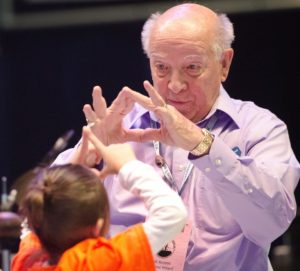 Charles Millard creates a symbolic “diamond” with a Four Diamonds child at THON 2018.

The resulting relationship between Four Diamonds and THON has had a monumental impact on the growth of the Pediatric Hematology/Oncology services and research programs at Penn State Health Children’s Hospital and Penn State College of Medicine, fulfilling Millards’ dream of helping children and families facing childhood cancer. When previously asked about the impact that had been made so far, Millard commented, “When you bring together good people for an important cause, there are no limits.”

The mission of Four Diamonds is to conquer childhood cancer by assisting children treated at Penn State Health Children’s Hospital and their families through superior care, comprehensive support and innovative research. Since its inception, Four Diamonds has assisted more than 4,800 children and families and raised more than $250 million to conquer childhood cancer, with approximately 70% of those funds coming from THON.

The name of Four Diamonds was taken from an essay that Christopher Millard wrote shortly before his death. The story tells of a knight’s quest for four diamonds – courage, wisdom, honesty and strength – needed to overcome an evil sorceress, and was symbolic of the characteristics Christopher’s family believed were necessary in his cancer battle. In the story, it is believed that Charles was the inspiration for the diamond of honesty. A link to the story is here.