Circling back to life: ‘I have no words for the gratefulness I feel in my heart’ 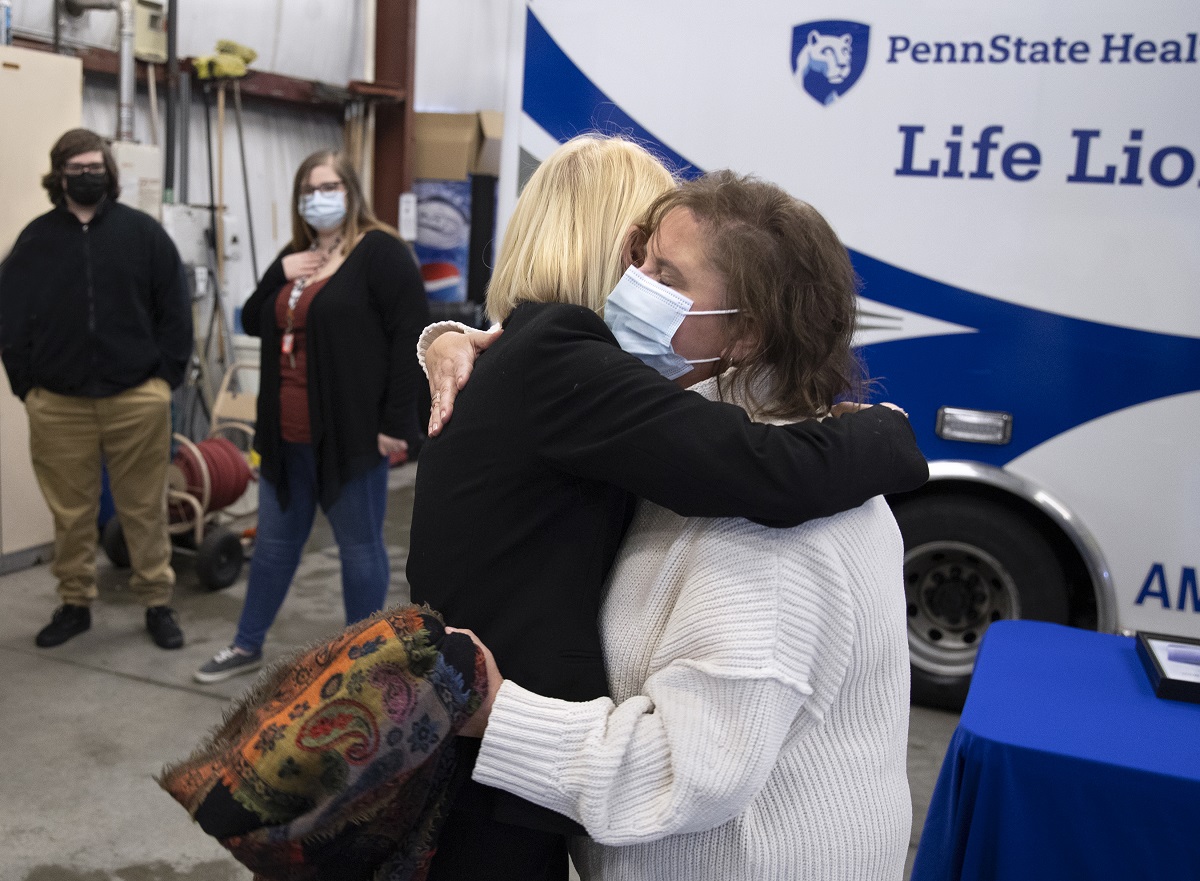 Few people with a story like Kate Warnagiris actually live to tell it, but the Conewago Township woman credits lifesaving responses from her family, a 911 dispatcher, Life Lion Emergency Medical Services and Penn State Health Milton S. Hershey Medical Center doctors with a survival she calls nothing less than a miracle.

“I look at all the people God put in my path, and I know that he was taking care of me from the moment I hit the floor,” said Warnagiris, who has an inherited heart condition called dilated cardiomyopathy, which can cause heart failure and sudden death. “The dispatcher, the EMS doctor and team, all the people who cared for me at the hospital… I’m a big fan of every one of them.”

Since she was diagnosed nine years ago, the 57-year-old has managed her condition with medication and dietary changes, and she had no warning that the morning of Oct. 20, 2021, might have been her last.

“We had just been talking about what we were going to do that day and then Mike headed for his office, and I went into the kitchen. Then Mike heard a thud,” said Kate, a self-employed psychotherapist. Her husband is a tax attorney who works from home.

“Kate is always dropping things, so I went to see what she dropped this time, and I saw her slumped on the floor,” said her husband, Mike Warnagiris. “Her eyes were open, but she was wasn’t responsive. It was very clear that it was serious.” 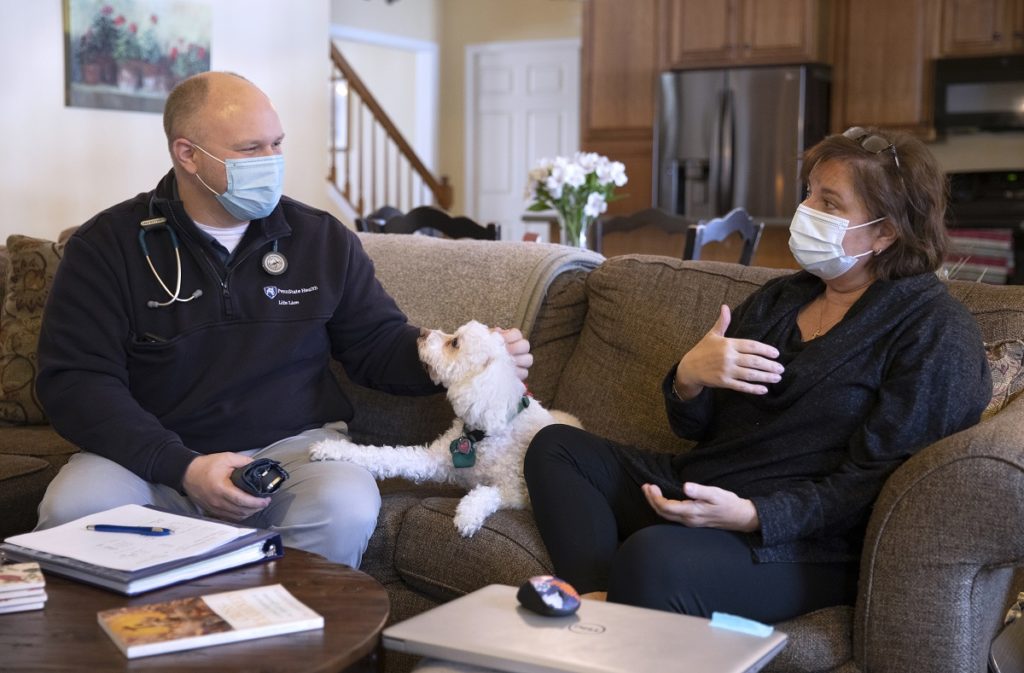 With her dog, Emmy, looking on, Kate Warnagiris discusses her current health situation with Loren Miller, left, a community paramedic with the Life Lion Community Paramedicine Program, in her Conewago home.

Taking command of the situation

He called to the couple’s 21-year-old son Justin, who quickly dialed 911 and relayed information to the Dauphin County 911 dispatcher.

The chilling scenario that unfolded over the next 10 minutes is recorded in a call that puts the listener into suspense even though the outcome is known. Kate’s life literally hangs in the balance as Mike and his son follow concise directions to give manual chest compressions and count shallow breaths. Numerous times Kate stops breathing, and they have to start compressions again.

“I was just a robot at that point, following the directions that Justin relayed from the dispatcher,” said Mike, who called upon rusty CPR skills he learned 30 years ago as a lifeguard. “There were no options – you must do this, and you must do it now. At no point did it feel like Kate was OK.”

Justin agreed that his instincts to help his mom – whom he calls his “No. 1” – took over in the moment. “Afterward, I was shocked that I didn’t freak out, and I got the job done,” he said.

As the drama played out in the family’s kitchen, the call went out for the closest available emergency units to respond to a cardiac event at home.

“Everyone knows the seriousness of a call like that,” said Eric Zaney, Life Lion EMS manager, who was the second one on the scene. “Even if everything aligns perfectly, the patient has only a 21% chance of survival. If there’s a delay of any kind, it moves to single-digit survival rates rapidly.”

Dr. Monica Corsetti, an Emergency Department physician at the Milton S. Hershey Medical Center and an EMS fellow, was at the Life Lion hanger when the call came in. She was first on the scene in an EMS physician vehicle stocked with lifesaving equipment and medications.

The Life Lion EMS Fellowship Program, the only one of its kind in south central Pennsylvania, pairs a doctor in the role of a fellow with EMS services to provide medical command on the scene.

“It really speeds things up because the doctor is seeing exactly what I’m seeing, and I don’t have to call in and relay everything to a doctor,” Zaney said. “It’s a wonderful and unique program that really saves lives.”

The ambulance ride to the medical center wasn’t without incident either – Kate’s heart needed to be shocked four times on the way.

“That extra care early on saved me, and it didn’t stop,” Kate said. “In the emergency room, they couldn’t get a pulse, but they didn’t give up. Someone suggested a quick ultrasound, and they saw my heart was quivering, so they put me on ECMO.” The extracorporeal membrane oxygenation machine pumps and oxygenates blood outside the body, allowing the heart and lungs to rest. 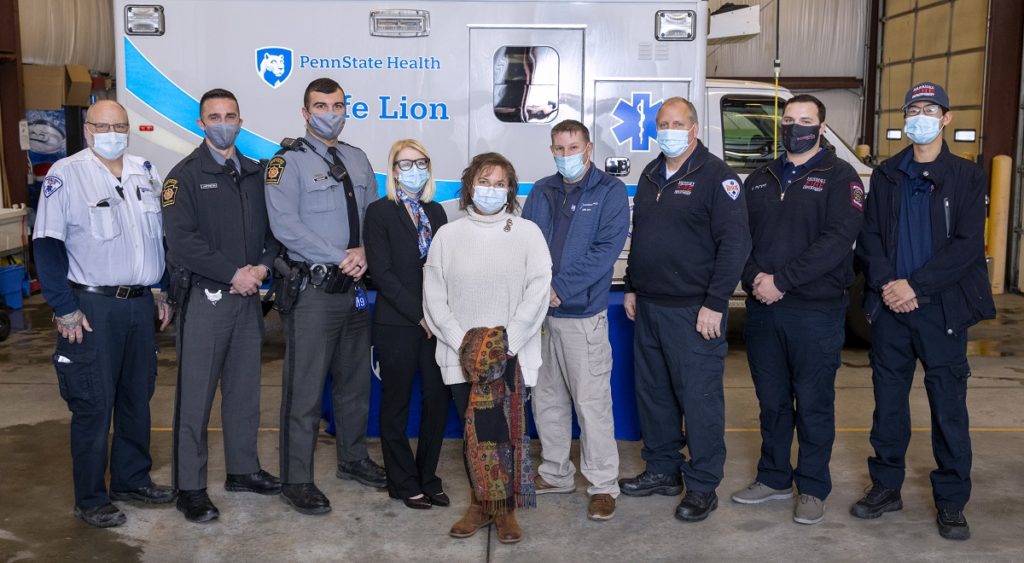 Eight days on life support and two weeks later, Kate was discharged home with a pacemaker and implanted defibrillator. One of the doctors who cared for her early in her stay returned to say goodbye, telling her, “This is what we always hope for but rarely see.”

At home, attention from the Life Lion Community Paramedicine Program provided Kate with free assessments and support designed to reduce the likelihood of readmission to the hospital.

“We’re the eyes and ears of the patient’s care team at home,” said Loren Miller, community paramedic. He discusses medications and what do to if symptoms return and helps troubleshoot any issues patients have in navigating the health care system.

“Kate is 98% back to normal,” he said. “That’s absolutely amazing for an out-of-hospital cardiac arrest.”

As Kate and her husband replay the 911 call, she says she can’t believe she’s the subject of the dramatic exchange – or that she lived through it and has no cognitive damage for as many times as her heart stopped.

“Miracles do happen, and prayers are answered,” Kate said. “I am living proof of this. I have no words for the gratefulness I feel in my heart.”