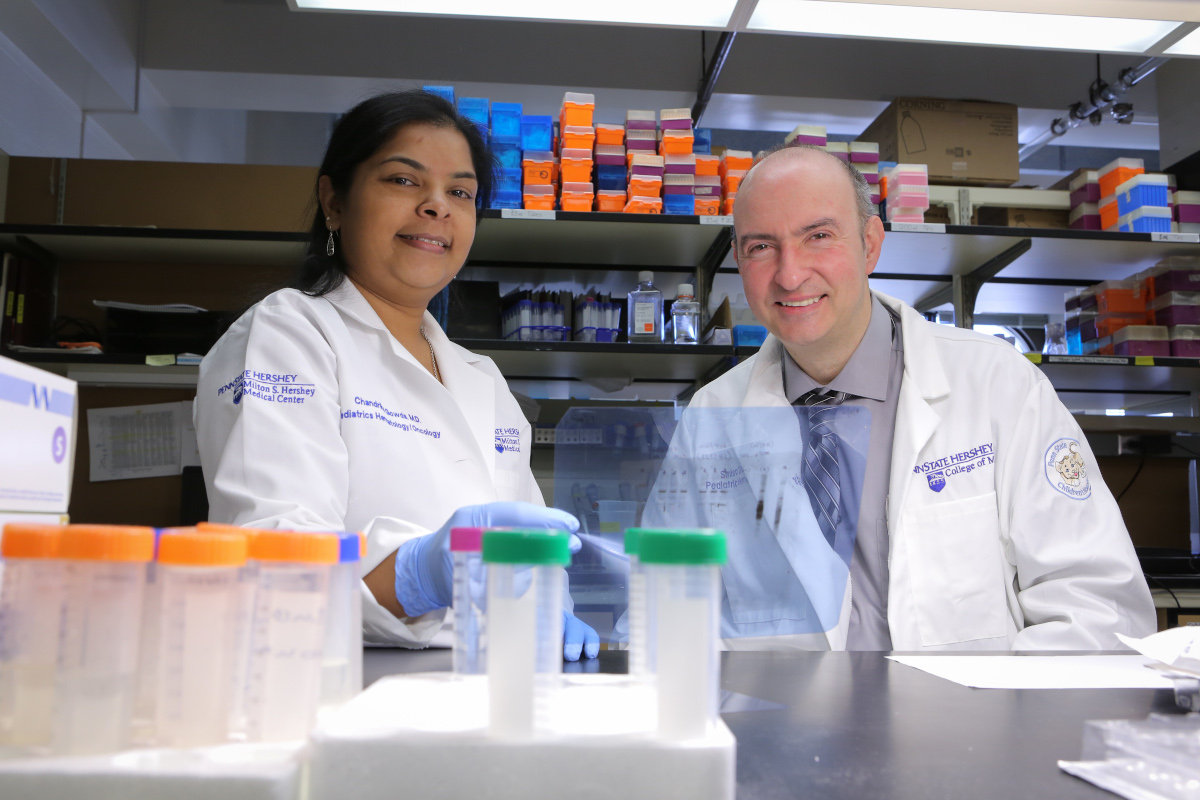 Days in the lab can be long and tedious, but one look at the sea of smiling children at the annual Penn State Health cancer survivors’ reunion reminds Dr. Sinisa Dovat why he’s spent the past 20 years on the trail of life-changing research into childhood leukemia.

“There’s no dramatic quarterback pass to score a touchdown in this work. You’re more likely grinding, yard by yard,” said Dovat, a researcher and pediatric oncologist at Penn State Health Children’s Hospital, Penn State College of Medicine and Penn State Cancer Institute. “But when you see the whole room full of kids, and you know it could have been empty, it’s just difficult to describe that feeling. Very few things are as rewarding as that.”

It was, in fact, the energy of those kids, their families and the thousands of Penn State students who come together to stage THON that lured Dovat away from his former post at the University of Wisconsin.

“When I saw a video about THON and heard about the groundbreaking research opportunities that Four Diamonds funds – I had never seen that kind of energy before, and it was contagious. I wanted to be part of that,” said Dovat, whose research focus is B-cell acute lymphoblastic leukemia (B-ALL).

THON, the largest student-run philanthropy in the world, encompasses a year-long fundraising and awareness campaign that draws upward of 16,500 students committed to conquering childhood cancer. Since 1977, THON has raised more than $190 million to benefit Four Diamonds and its mission.

“Not many researchers can pursue these very expensive and complex research avenues that we are exploring,” said Dr. Chandrika Gowda, hematologist/oncologist at the cancer institute and Four Diamonds researcher who came to work at Dovat’s lab in 2011. “It’s only because of Four Diamonds’ support that we can. It would not be possible if we depended only on federal funds.”

Indeed, Dovat said, only 8% to 9% of submitted projects get federal funding and certainly not the ones involving phase one clinical trials that have led to some of his and Gowda’s important discoveries.

The pair has been at the forefront of research into impaired activity of a protein called Ikaros that normally prevents the development and progression of leukemia. Patients with high-risk B-ALL are most likely to relapse after treatment because one of the two copies of the IKZF1 gene, responsible for producing Ikaros, typically has been deleted or mutated.

Most recently, Dovat, Gowda and a team of Los Angeles researchers discovered a combination of genetic mutations that may explain the worse prognosis of B-ALL in Hispanic and Latino children – and a novel therapeutic drug combination that may address it. Results of their research will help to improve the diagnostic approach to pediatric leukemia in these children.

“Four Diamonds helped me tremendously to grow as a physician-scientist by funding development of my own lab research program. I’m continuing to explore the role of CK2 protein in other high-risk pediatric cancers like acute myeloid leukemia and neuroblastoma,” Gowda said.

Future research will focus on a better understanding of the biology of different childhood leukemias and how drug resistance mechanisms are controlled, she said. The goal is to identify novel targets for overcoming resistance and affecting specific vulnerabilities of cancer cells without damaging normal cells.

“Being a physician-scientist is a rare opportunity for me and other physicians like me,” Gowda said. “To be able to do it for these children and see firsthand how the results from the lab are making a positive difference in their lives is amazing – and it’s Four Diamonds that makes all that possible.”

“Four Diamonds is funding daring, exploratory, cutting-edge techniques, truly breaking the barriers and giving these kids a brighter future,” Dovat said. “Who wouldn’t want to be a part of that?”