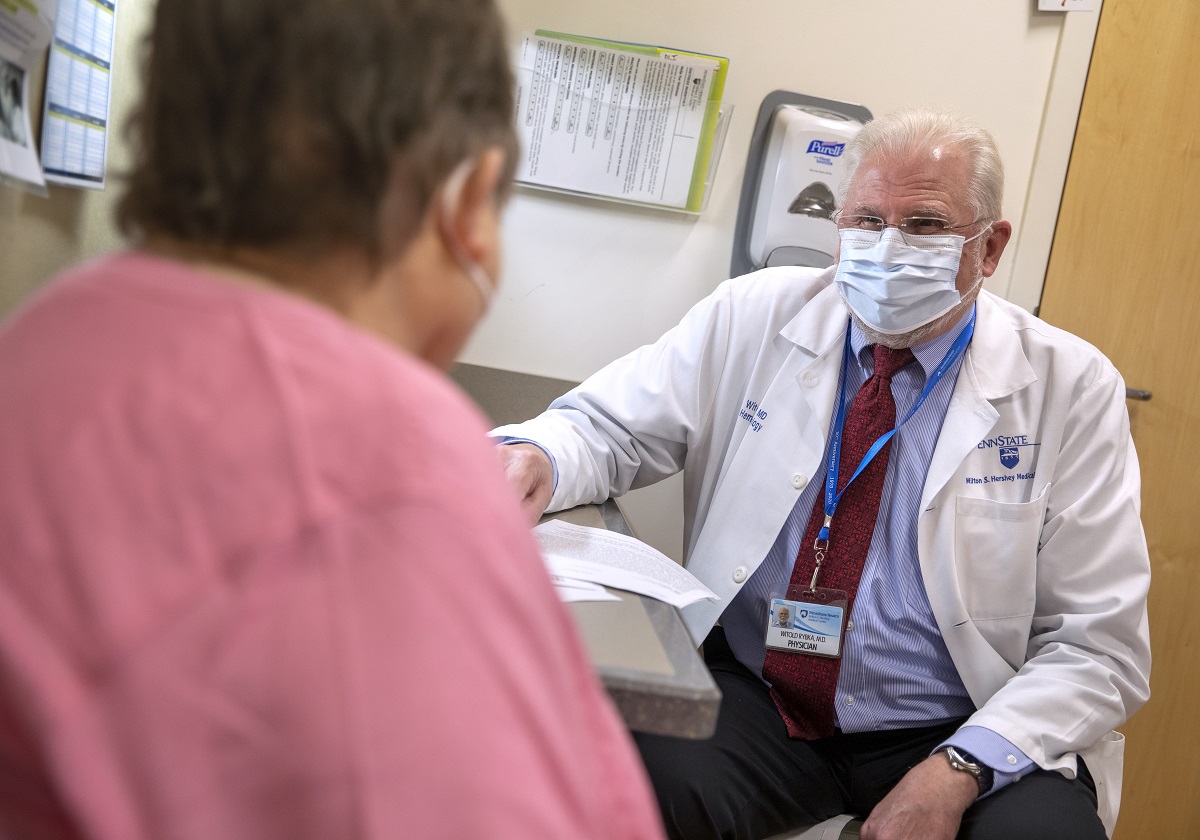 Dr. Witold Rybka talks with a patient during a recent clinic visit.

Hershey resident Maria English says there’s no doubt in her mind that she wouldn’t be here without the expertise of Dr. Witold Rybka.

“You get this news, and it’s something you never expect – and you think ‘that’s it,’” said English, who was 43 and newly diagnosed with non-Hodgkin lymphoma in 1997.

“I placed all my faith in Dr. Rybka. I felt so much better knowing he was directing my care, and here I am 26 years later,” said English, cancer-free since 2002.

Rybka, who is currently the medical director of the Hematopoietic Cell Therapy Laboratory, will retire from seeing patients at the end of June. “There have been lots of thank yous and quite a few tears,” he said of his last appointments with patients he has followed for more than two decades.

English is one of them. “I told him if he told me he was retiring 10 years ago, I would’ve said, ‘I’m moving in with you,’” she said, with a chuckle. “But now I told him I give him permission to retire.”

Rybka’s departure comes on the heels of a historical milestone at Penn State Cancer Institute in October 2021, which marked the 25th anniversary of the stem cell transplantation program.

The age of people who can benefit has also changed, from mostly children and young adults to people in their 80s, he said.

Often used to treat blood cancers, stem cell transplants are also used in treating conditions such as aplastic anemia, inherited disorders of the bone marrow and occasionally non-blood cancers where high-dose chemotherapy has been found to be effective, such as testicular cancer, Rybka said.

The Cancer Institute, which offered the first stem cell transplantation available in central Pennsylvania, has performed some 3,000 such transplants since 1996.

“Within a 200-mile radius, we are the provider of a full range of transplants, including cells obtained from matched sibling donors, matched volunteer unrelated donors, partially matched related and unrelated volunteer donors and cord blood,” said Rybka, who came to Hershey from Pittsburgh, where he was the adult bone marrow transplantation program director.

“In the beginning, we used stem cell transplant only in cases of bone marrow failure, such as aplastic anemia, and for treating leukemia from fully matched family members,” he said. “There has been a gradual adding of capabilities, and each step expands the next step.”

Rybka has kept up to date through an elaborate system of national and international conventions and meetings where specialists share their knowledge and experience.

“The field of regenerative medicine is huge and still being learned about,” he said. “At Hershey, I’ve been fortunate to be on the frontier side of medicine. We’ve participated in national and international groups and applied lessons from around the world here, and we’ve contributed our own along the way.”

Ongoing research has the potential to impact conditions that currently have no promising therapy, such as Parkinson’s disease and spinal cord injuries, Rybka said. The use of adult stem cells to repair damaged joints and heart muscle damaged by heart attacks is another area of promising potential use.

The first patient to receive a stem cell transplant at the Cancer Institute lived for more than 10 years but has since passed away.

He says he will miss the ongoing relationships with patients whose lives he saved or improved.

“Being able to live and work in this forefront of medical knowledge and then to be the intermediary who is able to apply it to our patients’ situations has been extremely satisfying,” he said.