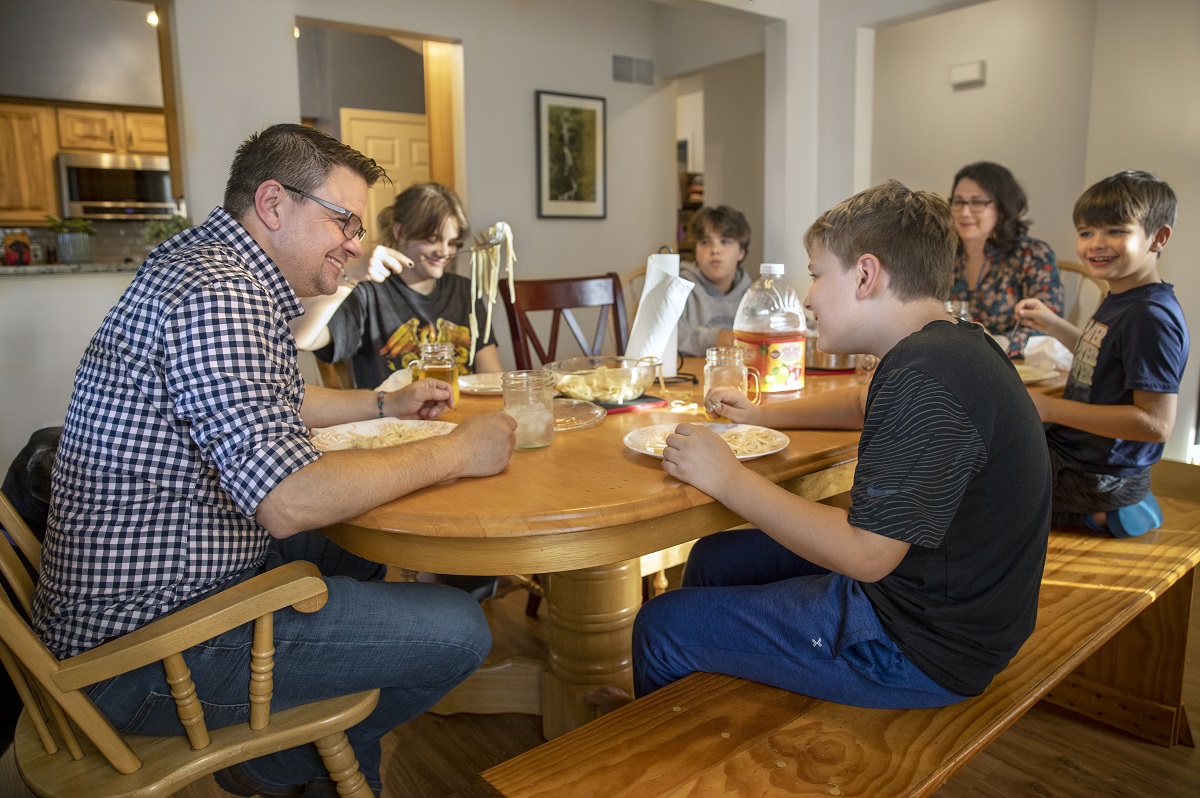 A healthy Tim Card, left, enjoys a dinner with his family in their Mt. Joy home. He jokes with his 10-year-old son, Justus, while, from right, counter clockwise, are David, 9, his wife Tricia, Sean, 13, and Lydia, 15.

It’s far from a lament over bad luck, although the 45-year-old has had more than his fair share. In 2018, his diffuse large B-cell lymphoma and the innovative treatment doctors at Penn State Cancer Institute gave him had weakened him so much he had to struggle just to make it up the stairs of his Mount Joy, Lancaster County, split-level.

Instead, four years later, Card’s question is spiritual. “Why am I still here?” he asks. “How do I not squander this?”

Aside from the ethereal, Card owes his second chance to his family’s support, guts and perseverance and a new cancer treatment called chimeric antigen receptor (CAR) T-cell therapy, or CAR T. Card was the first patient to receive the leading-edge treatment at the Cancer Institute, which has since used it to treat 43 others living with cancer.

Card, a former CrossFit gym owner, is back to riding his bike to stay fit and keeping up with his seven kids. Life since CAR T hasn’t been without setbacks. Some, like another family member’s bout with cancer, have been staggering. But Card, the inveterate trier of things – the youth pastor turned banker turned fitness geek turned realtor, with guitars and motorcycles sprinkled in – continues down his twisty, turning life with more gusto than ever.

Never had he experienced a turn as pivotal as cancer and CAR T. The treatment, he was told, would shrink months of painful therapy into weeks and days.

It did. And it may have bought him years.

View a video about Card’s journey.

The cancer started as a pain in his side that wouldn’t go away. He was healthy. “I was just kind of loosely sporty,” he said, but he’d enjoyed fitness enough that he started his own gym out of a small warehouse and kept it running for eight years. He didn’t smoke or drink. He was 40. Cancer didn’t enter into the picture. 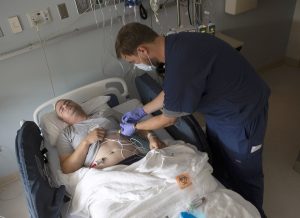 During Card’s treatment four years ago, a surgical nurse at Penn State Cancer Institute prepares him for a blood draw.

But that was the diagnosis in September 2017. Card figured chemotherapy would make short work of it, but after three rounds, doctors discovered the mass on his side was still growing.

“The mass wasn’t very big,” said Dr. Christopher Ehmann, the hematologist at Penn State Cancer Institute who treated Card. “But it was persistent.”

So, Card became a pioneer. The Cancer Institute is the first in central Pennsylvania to offer CAR T, which involved extracting several million of Card’s T cells, modifying them, and then injecting them in him again to fight the cancer. Lab technicians equip the T cells, which are a type of white blood cell, with a weakened virus that produce chimeric antigen receptors, which can attach to the tumor and kill it.

Since Card’s treatment, CAR T’s popularity has exploded, said Dr. Shin Mineishi, medical oncologist and director of the bone marrow transplantation and CAR-T programs at the Cancer Institute. “We’re getting busier and busier with CAR T patients,” he said. “Almost every week there’s an infusion.”

While not all patients can receive it, CAR T has been helpful to those who haven’t responded well to other treatments. Its use has been approved for different kinds of lymphomas in the four years since Card’s infusion. Doctors are hopeful they’ll be able to use CAR T to treat multiple myeloma by the end of 2022, Mineishi said.

What sold Card was the time element. CAR T is intense, but it works quickly. “I didn’t want to wait years,” he said.

In the summer of 2018, doctors took the T cells out. Card underwent another round of chemotherapy. He was admitted to the Cancer Institute on Sept. 10, and doctors injected the T cells. “It felt cold,” he said. “It smells bad – a burned garlic smell, like burned Thanksgiving.”

For 24 hours, he felt fine. Then came a fever that went as high as 105.6. He spent time in the intensive care unit. Doctors worried he might have seizures.

After three weeks, he’d had enough of being a cancer-cure Columbus. “Every time I peed, someone wanted to see it,” he said. On Sept. 27 he went home. His kids instinctively ran to him, and he begged them to stay away.

That same October, Card climbed back aboard the exercise bike in his garage. He rode five miles “super slow” and wound up slumped over his handle bars.

But he kept at it, and each day he got a little stronger. Nine months later, he went back to his old gym and did a hardcore round of exercise called “Murph” – 100 pull-ups, 200 pushups and 300 squats, sandwiched between two one-mile runs. That same weekend, he did the 75-mile Fools Classic bicycle ride in Doylestown, Pa.

He’d turned years of recovery into months. And he was back.

But the Tim Card who returned is different, he says. For one thing, he still feels … something. “My body doesn’t respond the way it used to,” Card says. “It’s been through an ordeal.”

In February 2020, after examining Card, Ehmann wrote on his chart the initials CR for “complete remission.” 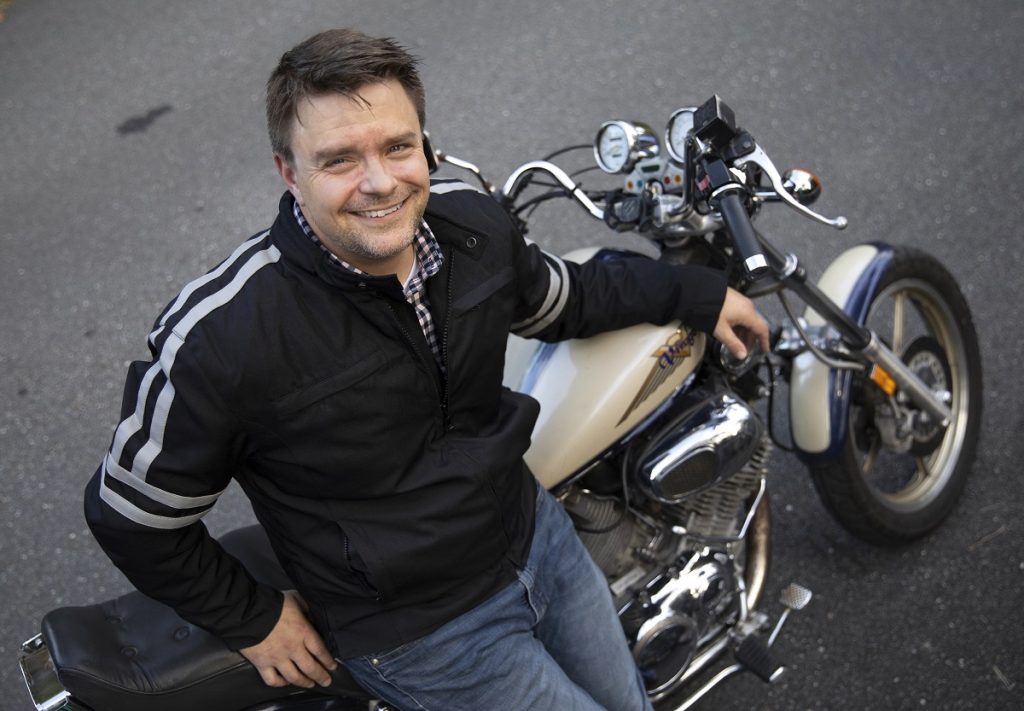 Card leans against his new motorcycle ― a hobby he and his children have taken up since his recovery.

For a doctor who works to cure the darkest of illnesses, Ehmann is as upbeat as he can be. “I don’t like the term ‘cancer-free,’” he said. “I don’t think anyone in the world is that. We probably all have malignancies lurking.”

But Card is healthy, Ehmann says. There’s a slight abnormality with his immune system, but so minor there’s no need to treat it right now. Not bad for an illness that four years ago seemed practically incurable.

Card’s experience led others to be interested in CAR T, Mineishi said. “People have been asking about it for years, after they see his story and the videos,” he said.

And though he’s a new man, the old Card still makes occasional appearances. In 2018, he sold the CrossFit gym and took a job as the sales manager in a warehouse. Now he sells real estate for a living. “I don’t gather a lot of moss,” he admitted.

Of the seven kids, two have grown up and moved out of the house. One son, Nick, had saved up to buy a Kawasaki Ninja motorcycle when he turned 18. “We were a little terrified,” Card said.

Then Nick graduated from Thaddeus Stevens School of Technology in Lancaster and moved to Georgia. Card’s daughter, Madelyn, said she wanted to learn to ride the bike. Card decided it was something they could do together.

He bought a Suzuki GS 500 from his neighbor, fixed it up so father and daughter could each have a bike, and WHAM! a new Card passion was born.

Card’s goal all along was to change years and months of cancer therapy to weeks and days. He wanted to buy more time with his kids. And, since it worked, he’s taking it.

But for what other reasons did CAR T change his life? He ponders the question all the time. “You don’t come out the same person you were when you went in,” he said. “It divides your life in half.”

The closest he’s come to an answer: we were all put here to live life in the present. That’s made two halves of the new Tim Card. On one hand, he takes life less seriously. After all, to Card, we’re little more than dust on a grain of sand floating through a black forever.

But on the other hand, he takes it more seriously than ever, because every single moment is precious.

“If all of us try to leave things much better than how we found them,” he said, “everything will work itself out.” 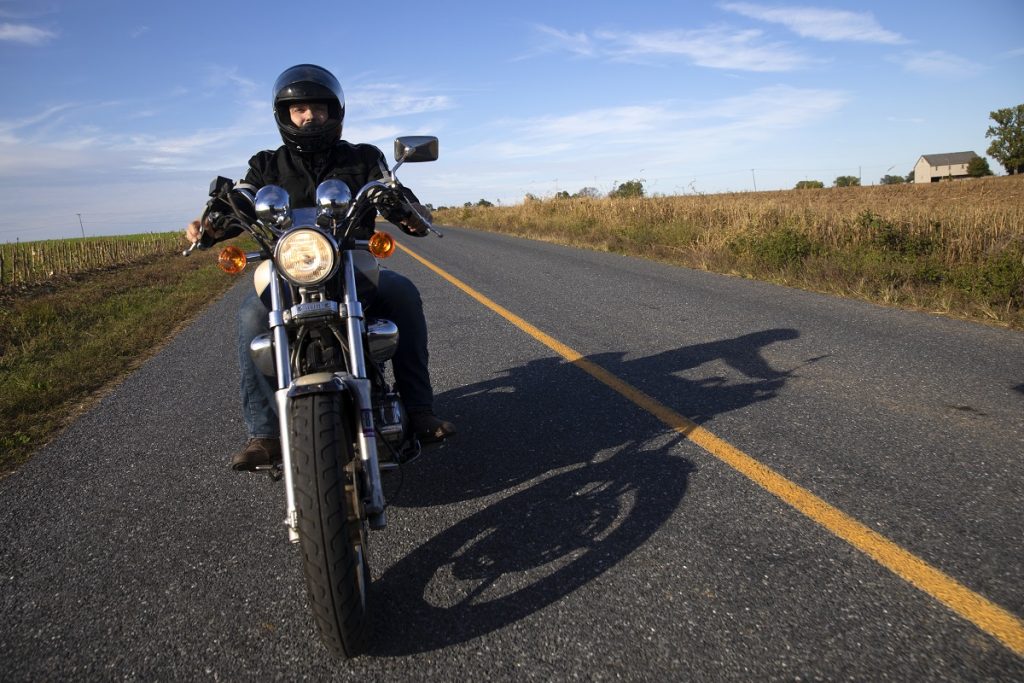 Card rides his motorcycle near his Mount Joy home.