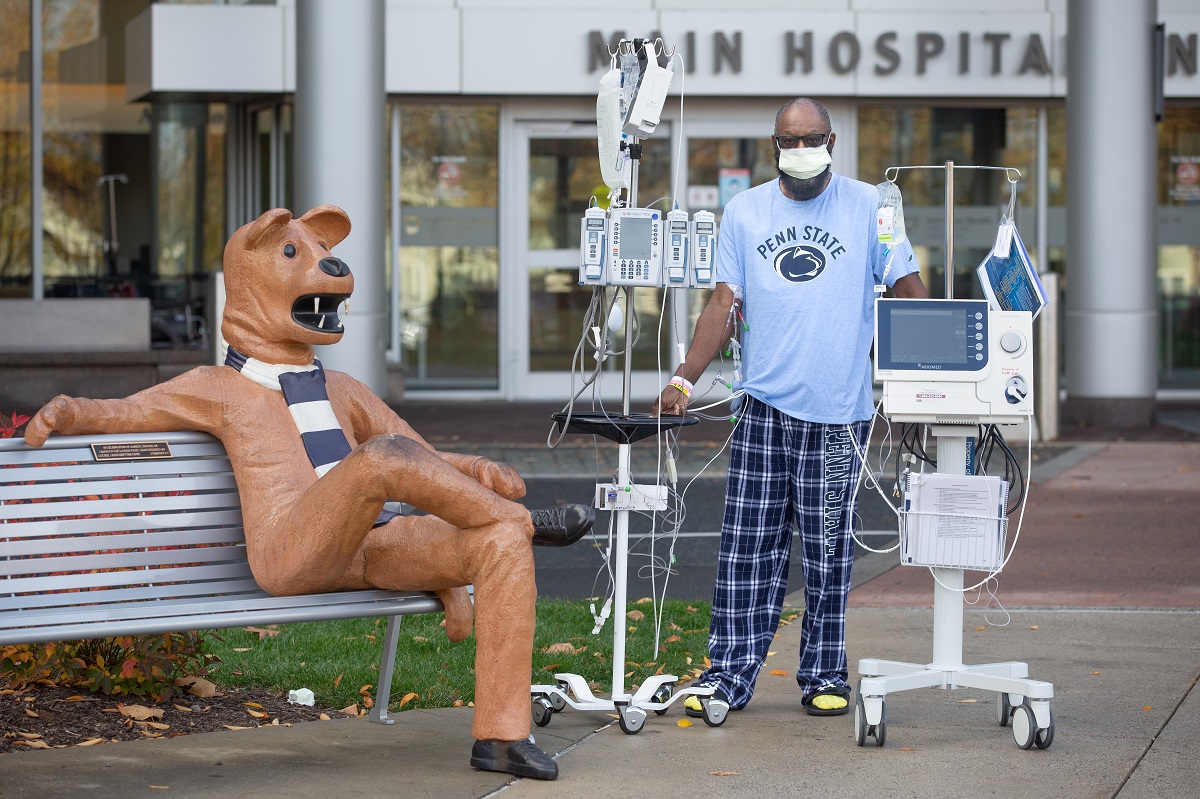 Eddie Holman takes an opportunity to get some fresh air, accompanied by his temporary heart pump, IV pole and a statue of the Penn State Nittany Lion.

Eddie Holman has taken 6.8-mile walks in the halls of Penn State Health Milton S. Hershey Medical Center. That’s an accomplishment for any patient, but doubly so for someone awaiting a heart transplant. While Holman awaits a new heart, his own weakened organ is sustained by a temporary  ventricular assist device called the Impella 5.5 heart pump.

In fact, the former Marine and Chambersburg resident may have set a record for mobility with his walks, said Dr. Miriam Freundt, a critical care physician at the Milton S. Hershey Medical Center. She presented his case at a recent American Heart Association meeting in Chicago.

Holman arrived at Hershey Medical Center in early October for evaluation and diagnostic procedures. “They immediately decided to keep me,” he chuckles. “I’ve been here ever since,” while a donor heart match is sought.

Holman had been feeling short of breath for several months, even when doing something only mildly strenuous, like walking. An echocardiogram confirmed he needed immediate support for his failing heart, said Dr. Balakrishnan Mahesh, surgical director for heart transplants and mechanical circulatory support at Hershey Medical Center. “He had mitral valve surgery in 2011. The best outcome for him now is to receive a heart transplant.” But Holman has Type O blood, and patients in that group usually wait the longest for a donor heart because they can receive organs only from others with Type O.

To support Holman while he waits, Hershey Medical Center physicians implanted the Impella device shortly after he arrived. The device pumps blood from the left ventricle into the ascending aorta, essentially taking the place of a healthy heart by maintaining critical blood circulation.

“Since early 2020, we have had about 25 cases in which we used the Impella 5.5 device as a bridge to transplant,” Freundt said.

‘You drove yourself here?’

Holman’s journey to Hershey Medical Center began with a trip to the pharmacy. “I went to pick up a prescription. I had felt horrible over the weekend. I couldn’t sleep. My stomach felt full. The shortness of breath was worse,” he said. Prescription in hand, he decided not to drive home but to the local hospital’s emergency room.

“You drove yourself here?” he says ER staff asked after seeing his condition. Following treatment there and at another regional hospital, he was transferred to Hershey Medical Center, where he received the Impella device.

“The device is implanted through an artery in the shoulder,” Freundt explained. Earlier heart-assist equipment was implanted using an artery in the groin, essentially confining the patient to bed. In addition, the newer device can be used for a range of patients with heart failure ― not only those awaiting a heart transplant.

“I wasn’t short of breath any longer after I got the device,” Holman said. He soon began taking laps around Penn State Heart and Vascular Institute’s North Hall at Hershey Medical Center. He finds moving about with the Impella device to be like walking with a second intravenous stand.

“He immediately told me how good he felt,” Freundt said. “He was soon walking up to nine-tenths of a mile every day. I said ‘No way!’ By Day 5, he was up to 1.9 miles in one day. And Holman kept walking, setting a goal of reaching 6.8 miles. Before long, he met that challenge.

He currently walks an hour twice a day during day and evening shifts. Because longer exercise requires coordination with the availability of staff members to accompany him, those often-record-setting walks take place about once every two weeks. For safety, he is always accompanied by a member of the health care team.

His new goal is an even 7 miles in one day. “Six-point-eight is so close to seven that the new figure has been scratching at me,” he said, laughing.

“Mr. Holman’s determination truly is an inspiration to others,” Freundt said.

‘Walking rings’ around others

Holman appreciates the care he is receiving as he awaits a heart transplant. “The staff has been great,” he said, acknowledging the assistance he receives on his walks as well as his constant care. 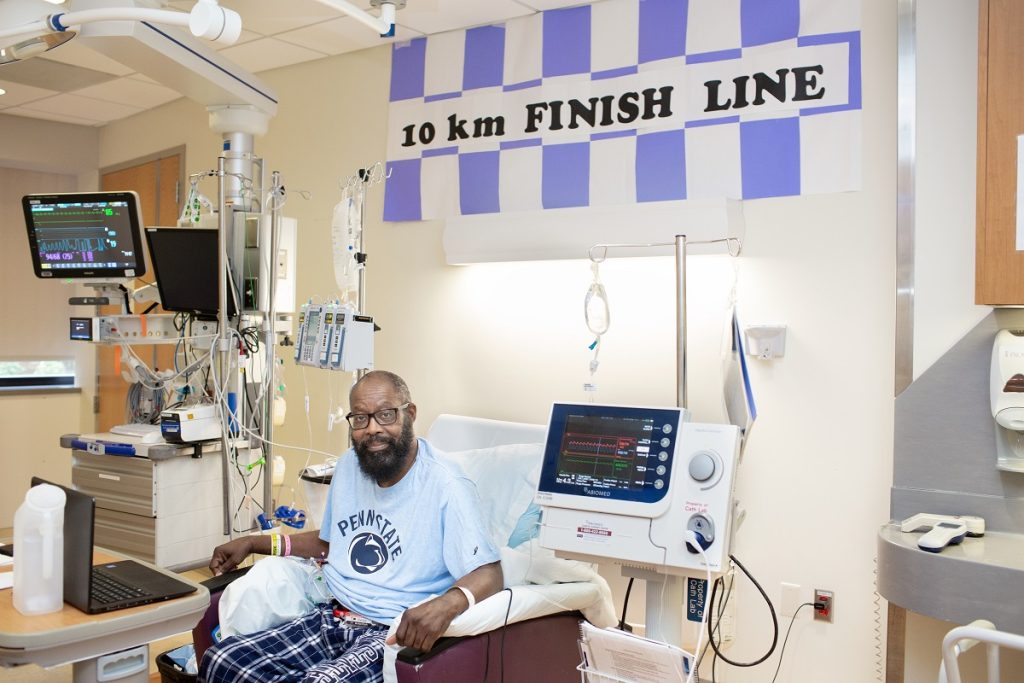 Holman poses in front of a sign celebrating an earlier walking goal.

The Medical Center entered information about his case into the database of the United Network for Organ Sharing. Mahesh continually reviews transplant possibilities for Holman but cannot predict when a donor match will occur. Beyond the wait times patients with Type O blood face, he said, Holman’s height of 6 feet and weight of approximately 200 pounds also narrow possible matches. “The donor heart must have sufficient capacity to circulate blood in the recipient but also not be too large for the chest cavity,” Mahesh explained.

At the same time, Holman’s physique keeps him strong and “walking rings” around many patients. In fact, his exercise is limited only by the battery life of the Impella device. When the pump needs to be charged, he can exercise on a stationary bike. “He’s in great shape,” Mahesh said.

Holman, who will turn 64 in December, believes his heart issues began when he developed rheumatic fever at the age of 6. Now a four-year employee of a Franklin County bakery, he attributes his record-setting walks to his family’s “go-getter” attitudes and his own motivation. “I have a do-or-die attitude,” he said. “If I don’t do it this time, I’ll do better next time.”

Holman was born in Chicago, but spent much of his life in Maryland, where numerous family members currently live. He moved to Chambersburg in 2000. His father served in the military, as did Holman, his brother and his sister. “They were all focused on doing well and overcoming any hurdles,” he said, citing the significant ranks they achieved while serving the nation.

“I work on my attitude toward things,” he said, reflecting on his family’s accomplishments. “I’ve never been a selfish person, but my one hope is that I help others know they can do it, too. If not 6.8 miles, maybe half a mile, maybe just around the block. But you can do it.”