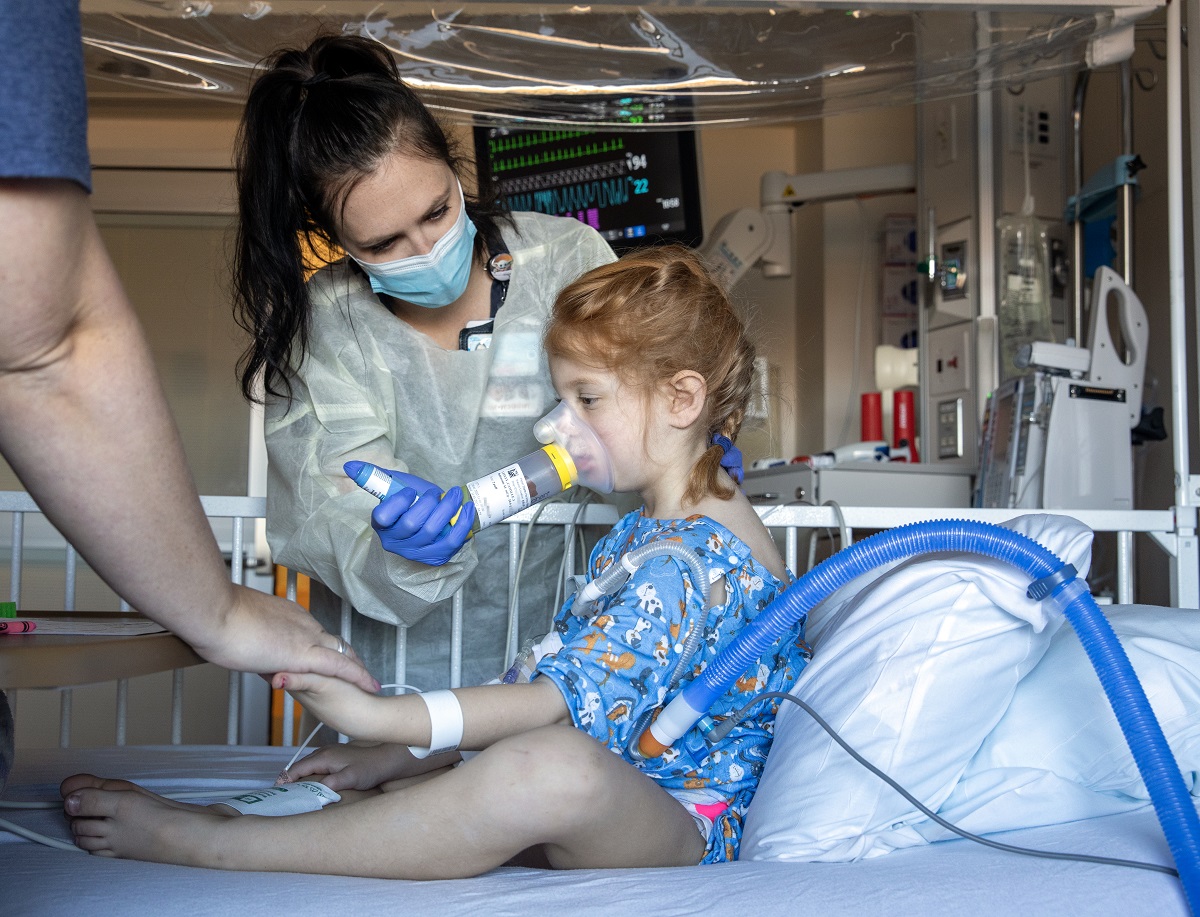 It starts as your basic bug with a runny nose and a cough. And for most babies, the virus stops right there.

But for some, the cough grows worse. A sick child may become unable to take milk. Their breathing becomes so labored you can see their ribs as they struggle for air.

Respiratory Syncytial Virus, or RSV, is tricky. Most of the time, parents don’t even know their child has had it even after the illness has come and gone. But already, children with RSV are filling hospital beds nationwide. After two winters with virtually no cases checking into medical centers, the illness has arrived early this year – and with vigor. Usually hospitals start seeing RSV in the late fall or early winter. This year, cases started arriving in late summer.

The stakes are high. Each year, RSV puts 58,000 to 80,000 kids under 5 years old in the hospital, according to the U.S. Centers for Disease Control and Prevention. As many as 300 will die. Six-thousand to 10,000 adults age 65 and older will die from the illness, which can veer from mild cough to major infection. And to date, there’s no cure.

What’s been going on with RSV?

Similar to what we’ve seen nationally, since around September, we’ve seen huge numbers of children with respiratory illnesses. Mostly RSV, but also several other viruses ― parainfluenza, adenovirus, enterovirus and rhinovirus. Everything except influenza. We haven’t seen influenza yet, but that should be here pretty soon.

How early we’re seeing the increase. We usually don’t see it until much later. We really started seeing it in what’s still technically summer ― late August and September. So, really early.

Why is this happening?

For the last two years, we didn’t really have any children hospitalized with these viruses. Like actually zero. None. So those children who would have been a few months old in 2020-2021 ― and would otherwise have gotten RSV back then ― didn’t. That’s because we were wearing masks, staying at home and being extra careful to keep our germs to ourselves. Now that we’ve stopped doing that, those children are now encountering RSV and other viruses for the first time.

What are the symptoms of RSV?

Well, obnoxiously, all of these respiratory viruses really start out looking the same, so there’s no way to tell at home or even in your doctor’s office if a child has RSV or influenza or COVID or some other virus without a test. They all can cause runny nose, nasal congestion, coughing, fevers and then sometimes a smattering of other symptoms like diarrhea, poor appetite and headaches. The trouble with RSV is that, more than many other viruses, it gets down into the breathing tubes that go down into the lungs. In small children, the irritation of those breathing tubes can make it so the child can’t breathe well and will sometimes need oxygen or even a ventilator to help with their breathing.

But the majority of people who get RSV don’t wind up in the hospital, right?

That’s absolutely true. In most children, it will just look like a cold. The younger and smaller the child is, the more likely they are to end up needing to be in the hospital. But most of the time, even very small babies don’t need that kind of care. They just have a cough and feel miserable at home for a few days.

The elderly can sometimes have serious problems from RSV also, particularly the very elderly, cancer patients and adults who have immune system problems. But mostly, it’s small children.

When should you go to the doctor?

When you start seeing clues that it’s something more than a cough. When a child is coughing so hard, they vomit, or when they’re coughing so hard, they can’t eat. For a little baby who’s breastfeeding or being fed from a bottle, if their nose is so stuffed up that they can’t take the milk, they can end up becoming dehydrated or develop nutrition problems. They need to see a doctor.

The biggest thing to watch is the breathing: breathing fast, breathing hard. Breathing hard in a baby looks like they’re using their belly to help get air in and out of their lungs. Their skin is sucking in between their ribs with each breath. Their head might be bobbing as they’re like trying to use their body to pull air into their lungs. If you see any of those kinds of things, you should definitely call your doctor. Stuffy nose, runny nose, a little bit of cough even if it lasts for a long time ― that’s just going to be a cold that’s going to just get better in the majority of cases.

Should you ask that your child be tested for RSV if they get sick?

In most cases, if your child just has cold-like symptoms, we’re not going to do a test, because there’s no treatment for RSV other than what we call supportive care. That means we help their body do whatever it can’t do because of the illness. So, if they can’t eat, we give them nutrition through a tube down their nose or intravenously. If they’re dehydrated, we’ll give them fluids. If they can’t get enough oxygen, we’ll give them oxygen. If they can’t breathe, we’ll put them on a ventilator. But there are no medicines to help a child stay out of the hospital if their symptoms from RSV worsen. If you took your child to the doctor with mild symptoms, they would say, “Your child has a cold. It could be RSV, but we can’t tell just by looking. Call us or come back if they start having trouble breathing.” So, there’s not much value in testing if they’re doing well and really just have nuisance symptoms.

Really, the value in knowing that a baby has RSV is in what it keeps us from doing to treat other possibilities.

It’s a swab in the nose.

What can you do to stop the spread of RSV?

If your child is sick, if they have runny nose, if they have cough and definitely if they have fever, they should stay at home. And that has always been our recommendation even well before COVID ― if you’re sick stay home.

Beyond that, if you’re not sick and you don’t have a sick child in your home, then I think it’s worthwhile to pay attention to think of the environment you’re visiting. Is it crowded? Are there lots of small children there? Do you live with someone whose immune system doesn’t work well? In those situations, you might consider not going to those kinds of activities through winter time or holding those activities outside when possible. Consider wearing a mask when it’s not possible.

There have been recent news reports that Pfizer is on the verge of obtaining approval for an RSV vaccine. Will that be a game-changer?

The medical community has been working on developing an RSV vaccine for decades. RSV and similar respiratory illnesses are the leading cause of childhood death globally. So, having an effective vaccine would definitely be a game changer, especially internationally where children have a pretty high risk of death from respiratory infections. And RSV is the most common cause of respiratory infections in little children.