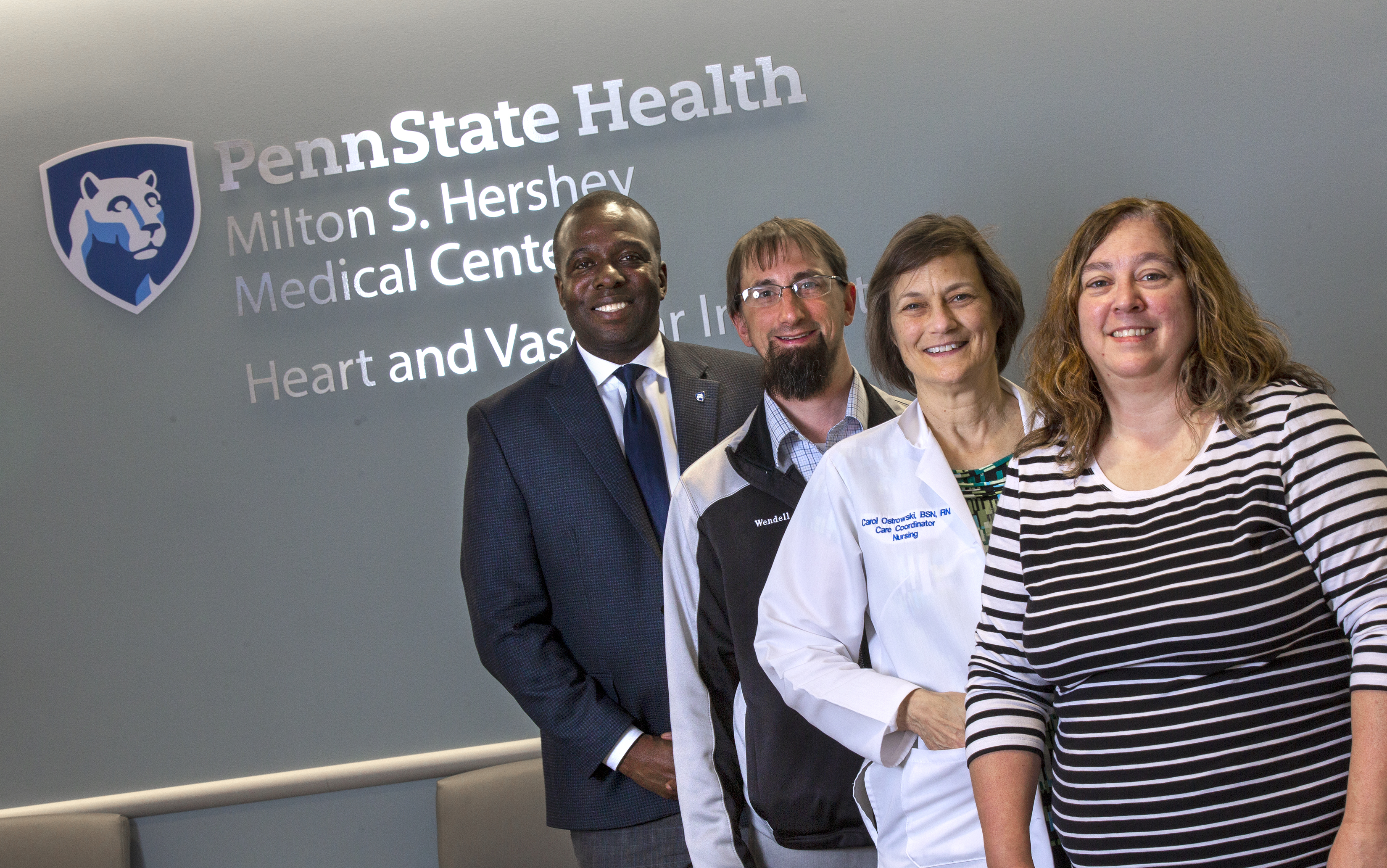 Among the staff who made the transport possible, from left, Ronald Cummins, Wendell Hess, Carol Ostrowski and Vikki Cicchillo of the Heart and Vascular Institute.

When the wife of a patient at Penn State Health Milton S. Hershey Medical Center’s Heart and Vascular Institute (HVI) took a turn for the worse at a nearby hospital earlier this month, staff rallied to make sure he could visit her before she died.

On Oct. 7, cardiologist John Boehmer got a call from UPMC Pinnacle Community Osteopathic Hospital, where the patient’s wife was battling end-stage cancer. They believed she was nearing death.

Boehmer and his team discussed whether they could discharge the patient so he could spend time with his wife before she died.

Unfortunately, the man had just gotten a left ventricular assist (LVAD) device implanted. He was in the intensive care unit and had not yet been taught how to manage his LVAD, so it was too risky to discharge him.

The patient and his family were not happy about that and wanted him to be able to leave right away.

Vikki Cicchillo, a clinical practice nurse leader for the HVI Critical Care Unit, said a social worker suggested a special type of order that would allow the man to leave the hospital briefly, as long as he had someone to monitor him and provide care until his return.

The initial effort started with the nurses and doctors, then social workers and care coordinators got involved. Risk Management, the Legal Department and Patient Safety all had to clear the plan, as well as the hospital administrator on duty.

Wendell Hess, HVI Critical Care Unit nurse manager, said because the visit was so important to the patient and his family, hospital staff wanted to find a way to do it, while ensuring he remained safe and that his insurance would still cover his stay.

“Sometimes insurance companies aren’t able to pay for the whole stay if a patient leaves the hospital,” he said. “They will question why we didn’t just discharge him.”

Once that was accomplished, the HVI staff called Life Lion EMS to request a transport team.

Surrounded by their family, the man and his wife were able to spend about one hour together before he returned to the Milton S. Hershey Medical Center.

“This is a whole-institution story because we had everyone weigh in, and nowhere along the way did anyone say no,” Buchle summed up.

The Medical Minute: Healthy eating over the holidays