‘Anyone would do it,’ says Hershey Medical Center ER nurse who adopted abused children she met on her shift 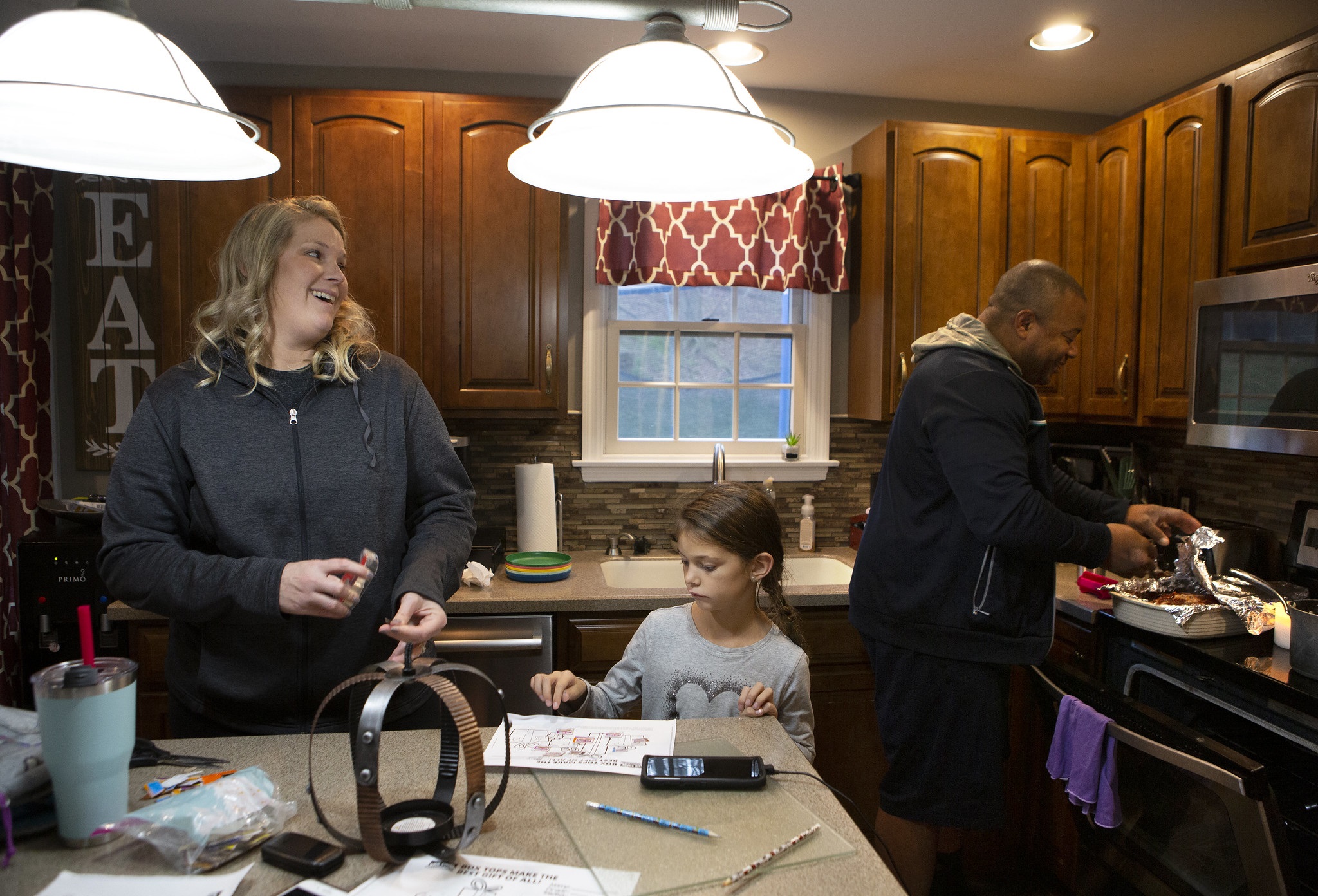 April Doster, left, smiles at her husband, Rubin, while helping her daughter, Hailey, with a project.

April Doster is a firm believer that everything happens for a reason.

“Neither of us had ever seen anything like what they looked like. You could see every bone in their bodies,” said April, who was returning to her shift after having lunch with her husband.

At that moment, neither of them imagined they would become Mom and Dad to the severely abused trio – but that, too, is no accident, April is sure.

“When I texted my husband to ask if I could bring some friends home for Christmas, he knew exactly who I was talking about,” she said. “His reply was, ‘Sure, but make sure you get Christmas presents for them.’”

What began as a kneejerk reaction to help children in need has turned into a forever home for J.T., now 9, Savannah, 8, and Hailey, 7, who never knew the normal provisions of a bed, mealtimes and a bathroom, let alone the joys of a birthday party, playing outside or a warm hug before they joined the Doster family in their Palmyra home.

“At first they just kept thanking us for letting them sleep,” April said. “They had to stand at attention against the wall with their arms outstretched – and if they were found sleeping, they were beaten.”

Click this image or the arrows for the gallery of photos >> 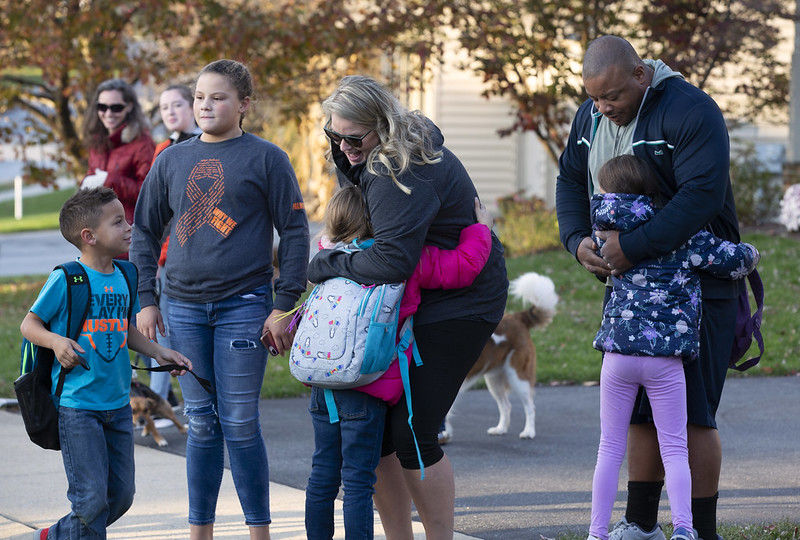 Court documents outline the horrific living conditions of the Halifax home where Joshua and Brandi Weyant kept the children locked in a room with no heat, bare of furniture, blankets and toys but flush with bedbugs, lice and feces. The paint was peeled off the wall, stopping at the children’s height—leading investigators to surmise they ate it because food was regularly withheld despite well-stocked kitchen cabinets.

The reason for the abuse was never clear, other than just plain cruelty. Hailey is the biological daughter of Josh Weyant and a half-sister to J.T., and Savannah ended up at the house after her mother gave her to Brandi Weyant. The Weyants are currently in prison for up to 39 years.

When the children were removed from the home on a tip from a caseworker, they suffered from starvation, neglect and abuse so severe that doctors at the Milton S. Hershey Medical Center testified that J.T. and Savannah were within two weeks of death. 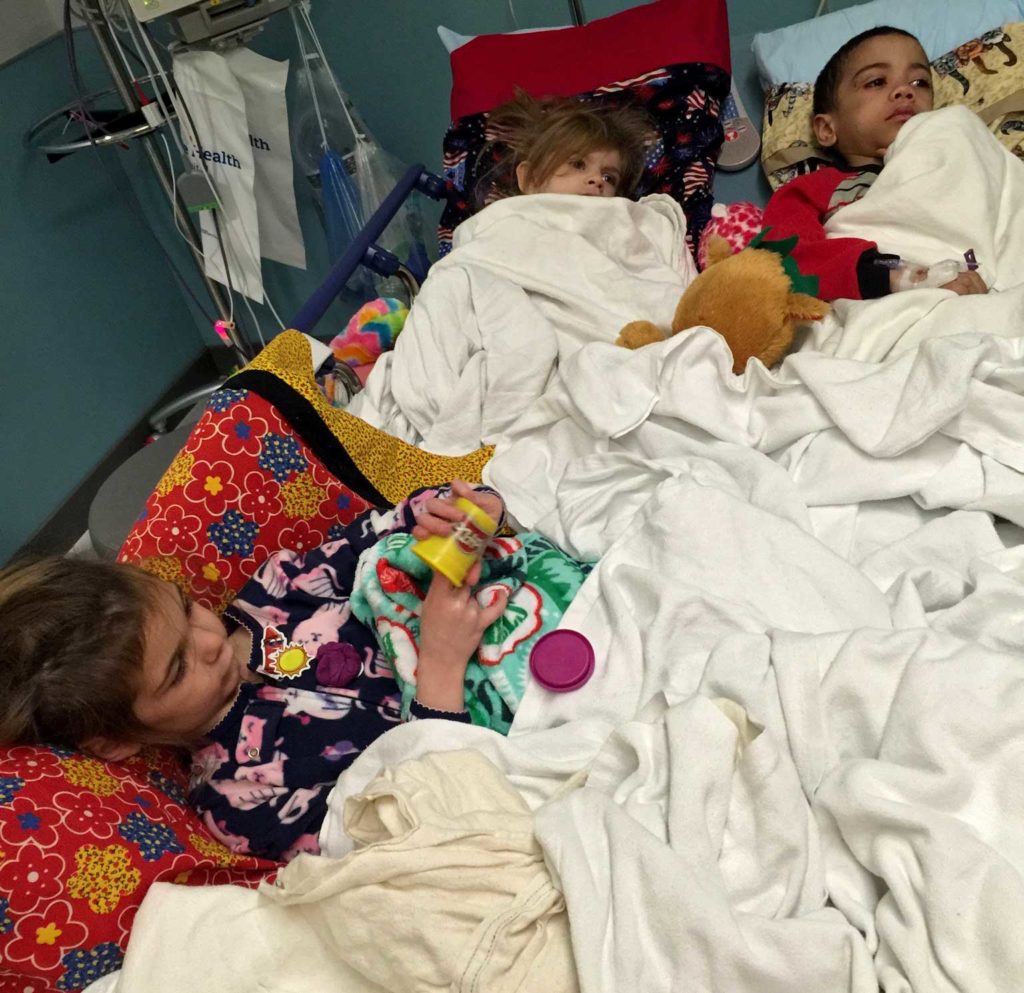 Pictures taken at the hospital show bruises, protruding ribs, arms as thin as broomsticks,  matted hair, but most hauntingly of all—a vacant stare that suggests the little person inside checked out long ago.

That first day in the hospital, April took care of J.T. and recalled “even his hair looked sick.” He suffered from refeeding syndrome, which can occur when food is reintroduced after starvation and the body can’t digest it. All J.T. wanted was food, but he kept vomiting after eating.

When April returned to work after a couple of days off, she was surprised that the children were still there. They had survived their ordeal because of each other, and they were not to be separated. When she heard two foster families had declined the trio, she says she spoke without even thinking and told the caseworker, “I’ll take them.”

The Dosters are no strangers to taking in children who need a home. They met as freshmen at King’s College in Wilkes-Barre, Pa., and married after graduation. Shortly after that, they became foster parents to four of Rubin’s nieces and nephews who were being raised by his mother when she died unexpectedly. At age 24, they were parents to children ages 5, 10, 11 and 12, whom they eventually adopted.

“Looking back on it now, we had no idea what we were doing,” said April, who was working as a pharmaceutical company representative. Rubin, a criminal justice major, was working as a warehouse manager.

When April lost her job in 2010, she used her unemployment checks to fund nursing classes at Harrisburg Area Community College. “See, everything happens for a reason,” she said with a chuckle. She applied for a nurse externship at the Medical Center and got placed in the emergency department and “never left,” she said.

That’s the reason why, two days before Christmas that year, April found herself wrapping Christmas presents in the waiting room of a lice removal clinic in Lemoyne where Hailey and Savannah were being debugged, thanks to generous financial donations from the Medical Center staff. The Christmas presents were thanks to donations made to the Child Life Program at Penn State Children’s Hospital.

Hospital employees rallied to the family’s aid, donating gift cards, money and clothing for the children who literally had nothing when they were brought to the Medical Center.

In the beginning, the children didn’t talk much and were easily frightened, but eventually the warmth and laughter of the Doster household won them over.

“All they really talked about was food – when could they have some?” said April, who took family leave from her job when the children first arrived.

When they talk about those first days together now, this happy, active clan laughs over the bumpy adjustments. Savannah and J.T. are still in therapy, but all three are socially well-adjusted, doing well in school and bonded to their new family.

“I love it here!” Savannah announced, throwing her arms out with dramatic flair. She’s the sassy, spunky one, quick to say she never wants to see the Weyants again. Hailey quietly climbs up on the couch and asks to read a book aloud. She doesn’t remember much about the abuse, and when she downplays how things were, J.T. and Savannah correct her in no uncertain terms.

J.T. will talk about the abuse he suffered – demonstrating how he was made to do a backbend over a cardboard box for hours and punished if the box showed signs of being flattened – but it’s clear he’d rather talk about his life now. He loves playing football, running track and wrestling. 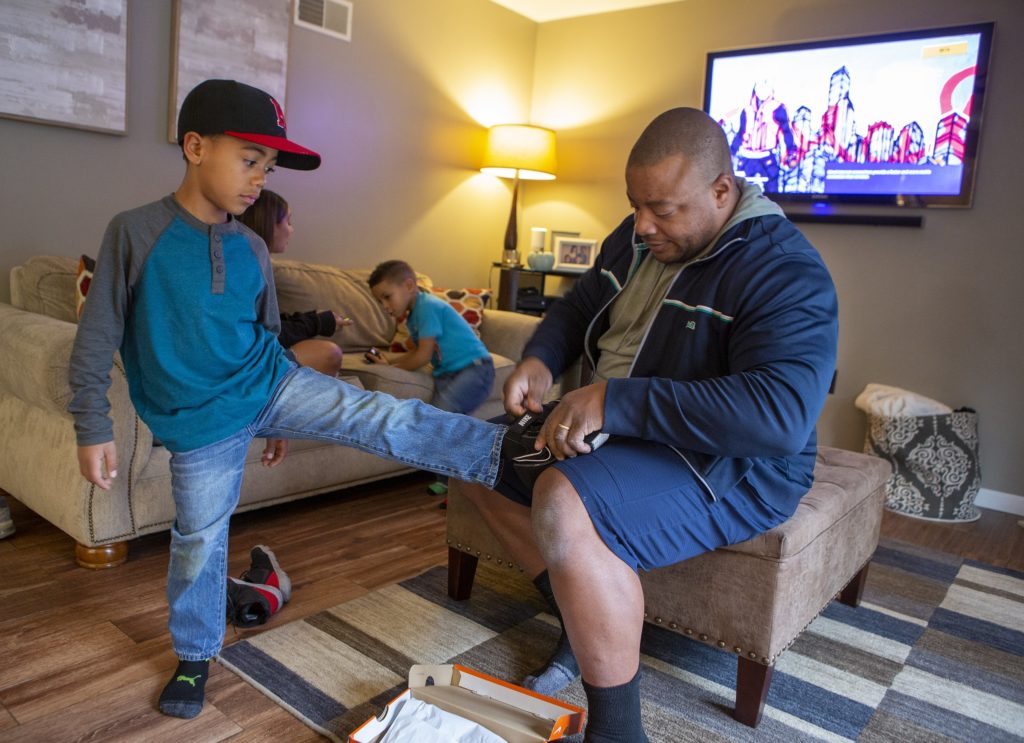 “All you have to do is open your heart”

April brushes off any label such as “hero” in changing the children’s lives.

“It just broke my heart that it was so close to Christmas, and these kids had nowhere to go,” she said. “Anyone would have done what I did.”

“That’s not true, Mom,” interjected Mya, April and Rubin’s 11-year-old biological daughter. Derek, 5, the couple’s biological son, climbs onto the couch next to his best playmate, J.T., while Rubin makes supper and calls Savannah and Hailey to the table. Taylana, 19, jingles car keys in her hand, ready to chauffeur the boys to football practice.

“I think about it all the time,” Taylana said, referring to the home she and her older siblings, now out of the house, found with April and Rubin. “I don’t know where I’d be without them. They’re amazing.”

The Dosters can’t pinpoint a single conversation where they decided to officially adopt J.T., Savannah and Hailey, which they did on Oct. 3, 2018.

“They really just became part of the family,” Rubin said. “I do remember one day when I was leaving for work and Mya and Derek said ‘Bye, Dad’ – and then Hailey said, ‘Bye, Dad.’ I went out to the garage and thought, ‘Oh boy, that’s it. They’re ours.’”

Today, when he watches Hailey kick a soccer ball or walk on a balance beam during gymnastics, he thinks back to the scrawny four-year-old who walked unsteadily and dragged him into the yard on a cold winter evening in her nightgown and lice cap because she had never played outside before.

“Just seeing how far they’ve all come, that’s my reward,” he said.

“Despite all the evil they were put through, they are amazing kids,” April said. “If you give somebody structure, love and a sense of belonging, look what it does. All you have to do is open your heart and let people in. That’s all we did.”