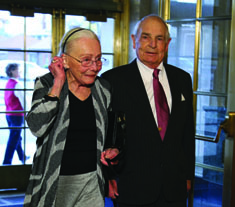 John A. Waldhausen, M.D., professor emeritus, College of Medicine, and founding chair of surgery, the Medical Center, died in mid-May after a remarkable and distinguished career that helped chart the course for Penn State Hershey.

Arriving at Hershey in 1969, Waldhausen provided some of the earliest leadership to the Medical Center when it was still in its infancy. But coming to Penn State was a surprising decision for someone who was already a rising star at Children’s Hospital of Philadelphia (CHOP), an established and well-known medical center. Despite being on the ground floor of launching an independent cardiac service at CHOP under the supervision of C. Everett Koop, M.D., Waldhausen still jumped at the opportunity to build his own department at Hershey. In just a few years, he was named interim dean and provost, but when he was offered the title of permanent dean, Waldhausen wrote in his memoir Finding Home in a World at War that he “chose not to, for I wanted to continue to build the department and felt committed to those I had recruited to Hershey. To achieve something, I felt I had to stick to one job.”

Waldhausen was already a nationally respected cardiovascular and thoracic surgeon and, now at Hershey, he quickly became known for his work in the lab. Soon after recruiting William Pierce, M.D., the two embarked on what would become Penn State’s Artificial Heart Program. His pioneering work in the 1980s led to an innovative therapy for coarctation of the aorta, a congenital heart defect that had few successful treatment options. In the following decades, Waldhausen’s protocol became universally-accepted and has reduced the infant mortality rate in patients born with this defect from 60 percent to 3 percent.

His arrival also marked the beginning of a successful partnership. The Medical Center was young and needed solid leadership to establish itself in an already crowded field of academic centers. He was blessed with intuitive leadership skills and found himself in a position to guide the direction of a growing institution. “If not for the contributions of Dr. Waldhausen and those of his enterprising colleagues, Penn State Hershey simply might not be here today,” said Harold L. Paz, M.D., chief executive officer of the Medical Center, Penn State’s senior vice president for health affairs, and dean, College of Medicine.

Well known inside his specialty, Waldhausen also made several other lasting marks on Penn State Hershey. During his career, he helped establish the Departments of Neurosurgery, Orthopaedics, and Ophthalmology and the Level 1 trauma program. These groups, along with what is now the Penn State Hershey Heart and Vascular Institute, have brought Penn State Hershey international recognition and are an enduring part of Waldhausen’s legacy.

During the 1990s, he was instrumental in building an interdisciplinary partnership between the clinical faculties and was named executive director of what is now the Penn State Hershey Medical Group, a practice of primary care physicians and specialists located throughout central Pennsylvania. “John Waldhausen was a leader in American surgery. His legacy will live on in the contributions he made to the field of cardiothoracic surgery, in the Department of Surgery that he created, and in the Medical Center and College of Medicine that he dedicated his career and life to,” said Peter Dillon, M.D., M.Sc., John A. & Marian T. Waldhausen Professor of Surgery, and chair, Department of Surgery.

Born in New York but raised in Germany, he received a degree in chemistry from the University of Great Falls in Montana. He attended the St. Louis University School of Medicine and completed his internship at Johns Hopkins University School of Medicine in the mid-1950s. He stayed on at Johns Hopkins to begin his surgery residency, which he completed at the University of Pennsylvania and Indiana University Medical Center. He served as editor of The Journalof Thoracic and Cardiovascular Surgery (1995-2001) and was president of several medical society boards, including the American Association for Thoracic Surgery (1991-92). He retired from Penn State Hershey as the John W. Oswald Professor of Surgery Emeritus in 2000.

Waldhausen and his wife of fifty-four years, Marian, who passed away this February, were the proud parents of John, Robert, and Gordon and had several grandchildren.