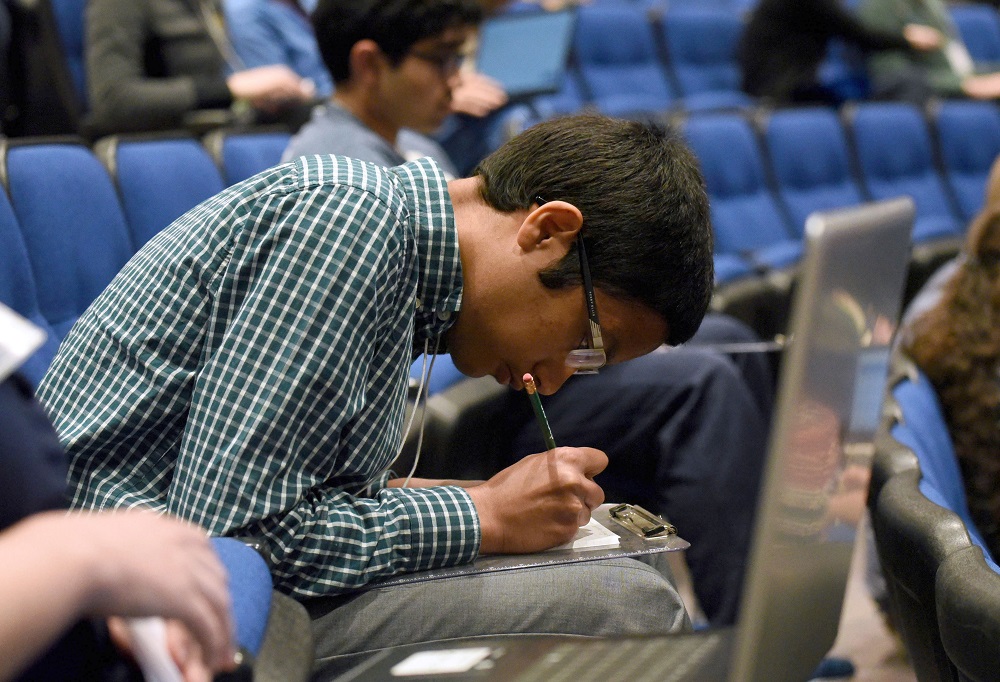 Thussentham Walter-Angelo remembers the question from a second-grade school report: What do you want to be when you grow up? His answer then was the same as today – a neurosurgeon.

“I was always interested in neuroscience,” the Cedar Cliff High School junior said. “There’s just so much to learn and not a lot that’s known. This competition is a great way to prove yourself.”

Walter-Angelo, who won the 2019 Central PA Regional Brain Bee sponsored by the Central PA Chapter of the Society for Neuroscience, was one of 56 contestants at the 2019 USA National Brain Bee Championship April 12 to 14 at Penn State College of Medicine on the campus of Penn State Health Milton S. Hershey Medical Center.

The students, local winners from 36 states, competed in four rounds of competition that tested their neuroscience expertise.

Preparation for the event was intense, with some students reporting upward of 15 hours a week spent studying. The questions are based on information from the Society for Neuroscience Brain Facts book and other free online resources

Latavya Chintada, a contestant from Glendale, Arizona, said she was nervous about the competition, but spending time with others who are also fascinated by the mysteries of the brain solidified her desire to become a neurosurgeon. “I got to meet a lot of great students and faculty,” she said. “This event could inspire a lot of us to go in the field.”

That, in fact, is the purpose of the Brain Bee, which was founded in 1998 by Dr. Norbert Myslinski, a neuroscientist at University of Maryland, Baltimore. “We build better brains to fight brain disorders” is the motto of the international organization, which has more than 200 chapters in 50 countries.

This marks the first time the College of Medicine has hosted the national event, now in its 12th year.

“It’s a big honor to host the National Brain Bee,” said Kala Venkiteswaran, PhD, assistant professor of neurology and neural and behavioral sciences at Penn State College of Medicine and 2019 USA Brain Bee site coordinator. “More and more information is coming out about how the brain works, and it’s important for the younger generation to become engaged because we need all the brilliant minds we can get to treat brain diseases.” 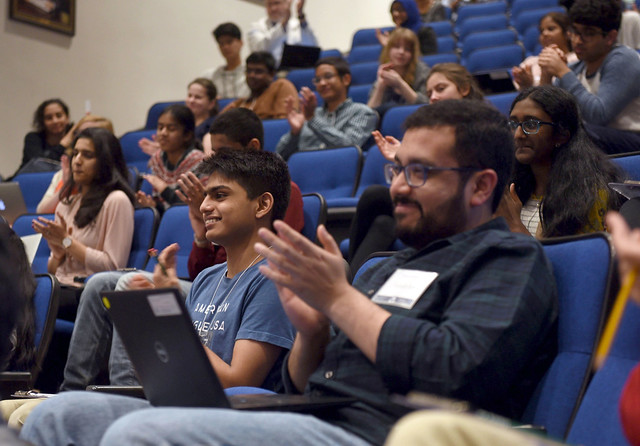 Age-related diseases like Parkinson’s disease and Alzheimer’s are expected to reach epidemic proportions in the next 10 to 15 years, and it’s imperative to prepare the next generation of neuroscience providers and scientists to create solutions, said Dr. Thyagarajan Subramanian, professor of neurology, the director of the American Parkinson Disease Association Informational and Referral Center and chairperson of the 2019 USA National Brain Bee Championship.

To win the honor of hosting the national event, Subramanian submitted an impressive proposal modeled after the Central PA Brain Bee, which he has hosted for the past 10 years.

“The history of their participation in the Brain Bee, how well they run their competition and the great facilities here at Penn State Health are all reasons why they were chosen,” Myslinski said.

Some 50 volunteers, including doctors, staff and medical and graduate students from the Milton S. Hershey Medical Center and the College of Medicine helped run the national event. Students had to answer written and oral questions and test, diagnose and prescribe treatment for actual patients who presented their symptoms in person or by video. In a lab round, the contestants also answered questions about images of brain-slice images, magnetic resonance scans and tissue histology.

“I never saw a human brain before, only sheep brains. That was really cool,” said Henry Shen, a senior representing Georgia, who finished fourth in the 2019 USA National Brain Bee Championship. “It’s a long road, yes, but it excites me. With each big step I take, I can make leaps in knowledge.”

The Brain Bee is just one way Penn State College of Medicine is committed to fostering the next generation of neuroscientists. Each year, the top 10 finishers in the Regional Brain Bee are invited to do an internship with Subramanian.

“The opportunity here is great,” said Walter-Angelo, who was an intern last summer. “High schools don’t really give you a lot of experience in the lab. Getting exposure to neuroscience early on can really help you plan your future career.”

“Two factors discourage young people from becoming neurologists – expense and the long duration of study,” Subramanian said. “We need to mentor and encourage those who have the inner motivation to study the sciences.”

Walter-Angelo, who placed 13th in last month’s national competition, said his positive experiences with the College of Medicine have flamed his passion for neuroscience. “I feel like I’m motivated enough to focus and achieve it,” he said. “That’s my dream.” 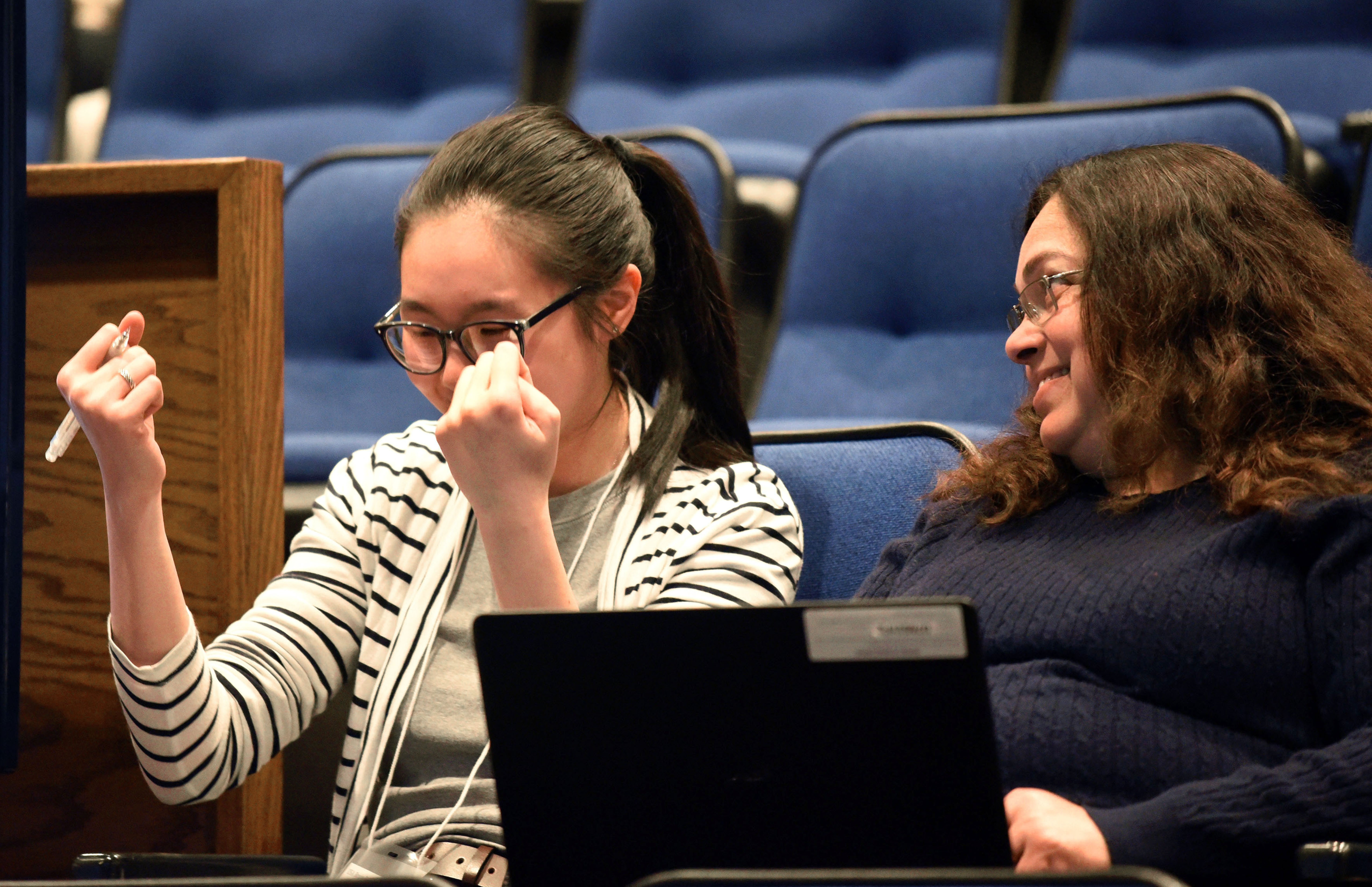 Their gifts live on: Faculty, students, families remember those who donated bodies for medical education