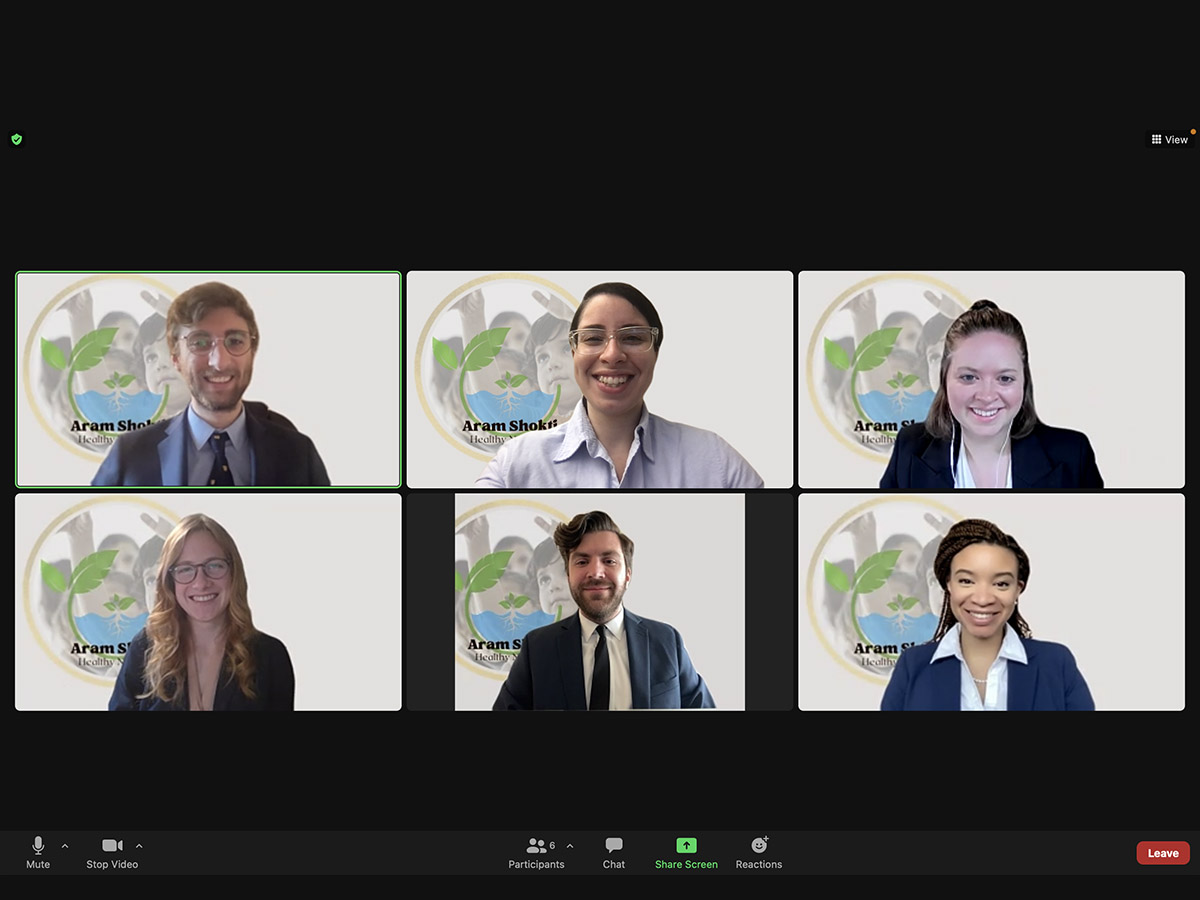 Throughout their studies, they’ve learned how to solve problems in classrooms and laboratories. But earlier this month, a team of students from Penn State, Penn State College of Medicine and Penn State Dickinson Law applied their knowledge to address a public health crisis.

How would they use their skills to help thousands of refugees – victims of genocide – whose children are facing malnutrition?

The six students gathered virtually to compete with 43 other teams from around the globe in the Emory Morningside Global Health Case Competition. This year, the Penn State team won an honorable mention for their action plan to improve the health of an indigenous population, but what they took home was more valuable than any trophy.

Below is a day-by-day account of their work during the competition.

But first, meet the team:

Penn State students have competed in the event, hosted online by the Emory Global Health Institute, for the past five years, and this marks the second consecutive year that the University was recognized by judges. Last year’s team placed fourth.

Emory released the topic and details related to the head-to-head challenge at 5 p.m.

Interdisciplinary teams of graduate and undergraduate students from across the world logged in to review a series of case studies. Each one highlighted specific priority areas about four indigenous populations — French Polynesia, Diné (Navajo), Rohingya and Inuit. Each team chose a group on which to focus their presentation. Penn State picked Rohingya, a population of mostly Muslims concentrated on Myanmar’s coast on the Bay of Bengal.

Because of the ongoing Rohingya genocide, thousands have fled from Myanmar to Indonesia, Malaysia, Thailand and Bangladesh. Displaced and living in refugee camps, Rohingya women and children face a multitude of health challenges and gender-based violence.

“Once we got the case and saw the four communities to focus on, we did our best to narrow the selection down to two options and strategically select the community we believed we could impact the most,” Llavona-Ortiz said. “This hasn’t been easy, because although it is a competition based on fictional efforts, the needs of the communities presented are real, detrimental and concerning.” 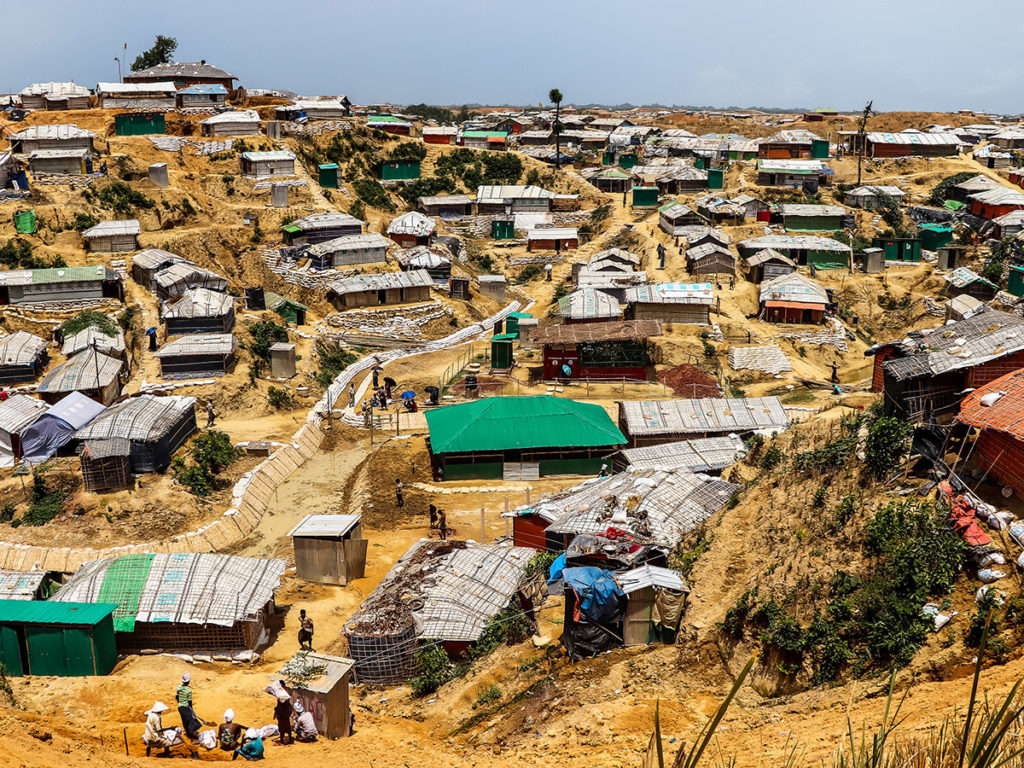 “We felt confident about our ability to succeed, but were taken aback by the case’s complexity,” said Toyobo. “Nonetheless, we were thrilled about the challenge and plowed forward. We planned to meet daily to brainstorm to find innovative and feasible solutions for our chosen population.”

Team members worked throughout the weekend researching the Rohingya, assessing health disparities among refugees and devising a plan to improve the situation. They discovered children under the age of five were the most vulnerable to disease and the most in need of life-saving nutritional intervention.

“We spent all weekend tossing ideas back and forth, and ultimately decided on a novel approach to address food insecurity and malnutrition,” said Connor.

Students began drafting the main components of their presentation. On Monday afternoon, they received feedback from advisors from the Department of Public Health Sciences.

The team outlined how to improve nutrition among Rohingya children in Bangladesh by implementing hydroponic gardening. They paired this with a rigorous malnutrition education campaign spread with help from community leaders.

“Ultimately, this case gave me a new perspective on how environmental health fits into global health, and we were able to approach the problem through an interdisciplinary ‘One Health’ lens,” Connor said.

With a comprehensive plan in place, the team compiled all the content for their presentation. On Thursday, they conducted a dry run for Penn State faculty and staff. Afterward, the team started making final revisions to their slides.

”Since January, the students came together to work on practice cases and incorporated feedback from faculty and staff who coached the sessions,” said Kristin Sznajder, associate director of international initiatives. “Through their hard work, the students exemplified the benefit of interprofessional collaboration in addressing global health interventions.”

The deadline to submit their final presentation was 5 p.m. This marked the end of a jam-packed week for the students.

“This process has been beyond rewarding,” said Jump. “I am truly proud of the work we produced after such an exhausting week.”

“Participating on the Global Health Case Competition Team was a magnificent experience,” said Holcomb.“Designing and presenting multifaceted health action plans demanded a level of organization and focus that I did not previously possess.”

Finally, competition day. The challenge was composed of two rounds. Each team competed in the first round. Penn State was Team No. 2, which meant they would present via Zoom at 9:30 a.m.

A panel of public health experts from academia, medicine and entities such as the Centers of Disease Control and Prevention judged each presentation to evaluate if teams targeted the priority areas for each population, addressed sustainability and community involvement and provided an evaluation component.

After the first round, judges narrowed it down to the top six teams. Those teams advanced to the final round and had to address a new curveball presented by the judge before presenting their final, revised plans.

In the end, Yale earned first place for their presentation focusing on Inuit. Other winners included Uniformed Services University of the Health Sciences, University of Pittsburgh, Makere University, Universidad de los Andes and University of Alabama at Birmingham. 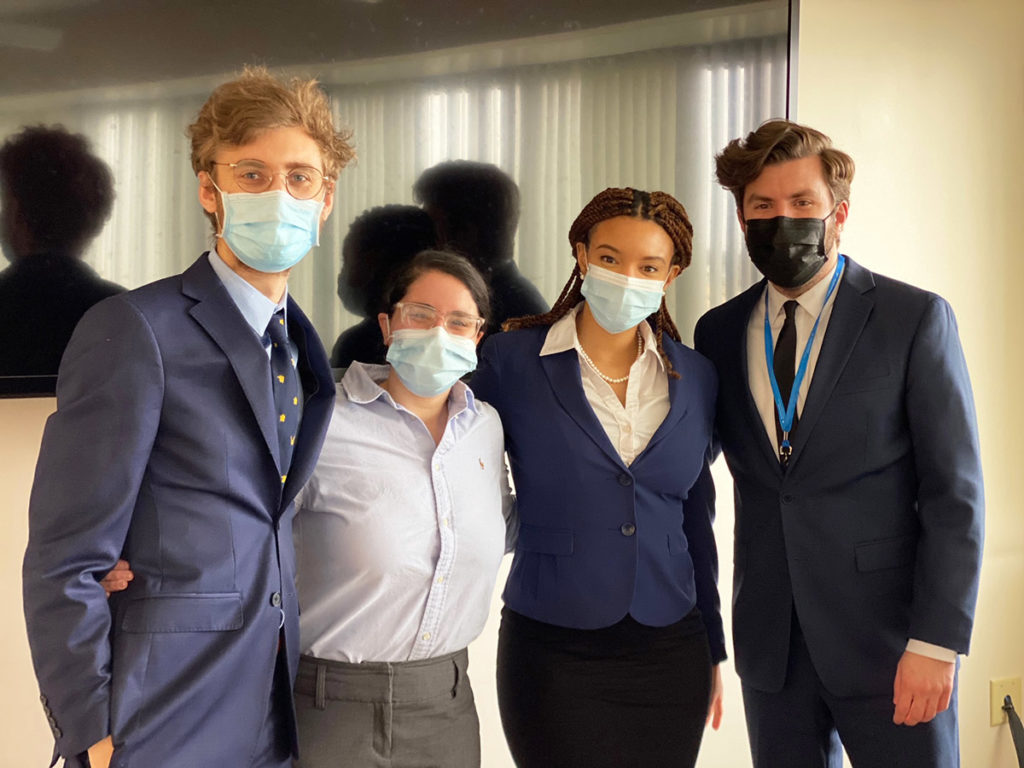 “While I would have loved to have made the finals, I was really happy that we were recognized as an honorable mention,” said McNeave.

“We specifically chose the Rohingya population out of the four options for its complexity, knowing if we got it just right, it would give us the best chance to stand out,” said Jump, who served as the team captain. “I am of course biased, but I think we did just that.”

Working together on mock cases since the beginning of this year helped students hone their skills. Team members said this hands-on experience helped them gain a better understanding of global health.

“We celebrate our Penn State student team whose honorable mention has earned them special praise from the Emory judges, affirming the exceptional merit of their hard work,” said Julie Lentes, manager of the Public Health Sciences Global Health Program and the team’s mentor. “Here is yet another demonstration of the unwavering enthusiasm of our students and their commitment to investigating solutions to the world’s most pressing health problems.”

Being part of the head-to-head competition made a lasting impression on students too. “I have learned a lot throughout this process, especially with putting together a public health intervention,” Connor said. “This was my first time learning more about the business aspects of an intervention. This case competition helped me hone a new skill, and I hope to be able to carry this into my future endeavors.”

“It’s amazing and very rewarding, to see how they go from the first awkward introduction to becoming a cohesive all-for-one force in a matter of a few weeks,” said Wenke Hwang, Director of Penn State’s MPH Program. “This certainly would not be possible without full commitments from students, as well as strong support from faculty and staff. It’s truly a team effort.”