Dr. Valerie Brown, associate professor of pediatrics at Penn State College of Medicine, thought THON was too good to be true when she came to Hershey in late 2013.

“I just didn’t believe that this support existed,” she says. “It was a dream come true, but even more.” 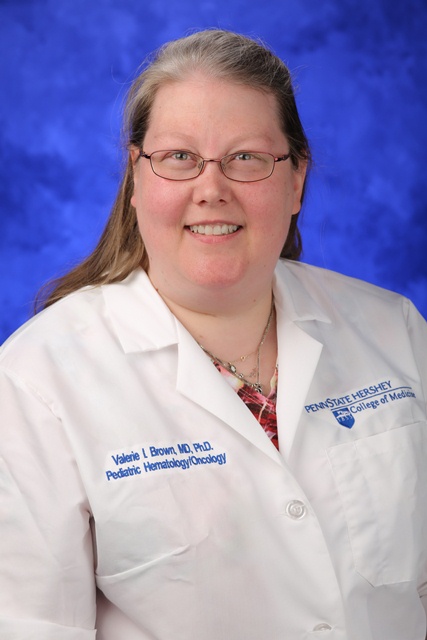 With the help of THON and the Four Diamonds Fund, Dr. Brown is growing a cutting-edge experimental therapeutics program for pediatric patients with cancer and has brought the Neuroblastoma and Medulloblastoma Translational Research Consortium to Penn State Hershey Children’s Hospital. A consortium is a collaboration of physicians and scientists with different areas of expertise working together around a specific disease or type of disease. In a translational research approach, scientists and others work across their fields of study to move discoveries made in the laboratory to use in patients, and take what they learn with patient populations back to the lab for further study.

One of the goals of the consortium is to improve the outcomes for children with cancer by quickly determining a specialized treatment.

“A lot of treatment for patients with a disease that has come back or mutated is like rearranging the deck chairs on the Titanic after it hits the iceberg,” says Dr. Brown. “You can’t avoid the iceberg, and so you need to have better lifeboats. Early phase clinical trials help us to build a better lifeboat.”

For example, the consortium is running a personalized medicine trial in which a patient’s specific tumor is studied to identify its weak spots, and then a report of the most effective drugs that targets these weaknesses is generated.

“We plan on participating in the next generation of this type of personalized medicine study which is currently in development,” says Dr. Brown.  Through this clinical trial, eligible patients go to a consortium center, such as Penn State Hershey Children’s Hospital, and have part of their tumor removed. After DNA and RNA extraction, the tumor is profiled, and the report of potential active drugs is generated. Then, a treatment plan tailored to the patient’s specific tumor and based upon this report is generated by the expert members of the consortium. Typically, this process takes around three weeks to generate the report alone, but in the consortium studies, this process has taken only six or seven days.

“There are more needles in the haystack now,” says Dr. Brown of cancer treatments identified in this way. She hopes to apply the method from these clinical trials to the treatment of all tumors.

It’s what Dr. Brown calls “the next quantum leap in oncology”—personalizing a cancer patient’s treatment based upon the biology of the tumor.

“We have really maximized what can be done with conventional medicine for these patients with cancer that has come back or mutated,” she says. She is grateful for the Four Diamonds Fund for recognizing the value of the experimental therapy program and working towards a quicker, more effective individualized treatment.

Through the support of the Four Diamonds Fund, she has dedicated time to participate in this consortium as well as others and to push this important research forward. She also has been able to create a team that collects information for the consortium and educates families about experimental therapeutics.

The Four Diamonds Fund was created in 1972 by Charles and Irma Millard in honor of their son Christopher, who lost his battle to cancer at age 14. Since then, more than 3,300 children and families have been assisted with the costs that insurance doesn’t cover.  The Four Diamonds Fund became the sole beneficiary of THON in 1977, and THON has since raised more than $101 million for pediatric cancer patients and research.  The Four Diamonds Fund also sponsors 41 researchers at the College of Medicine, all driven to find a cure.