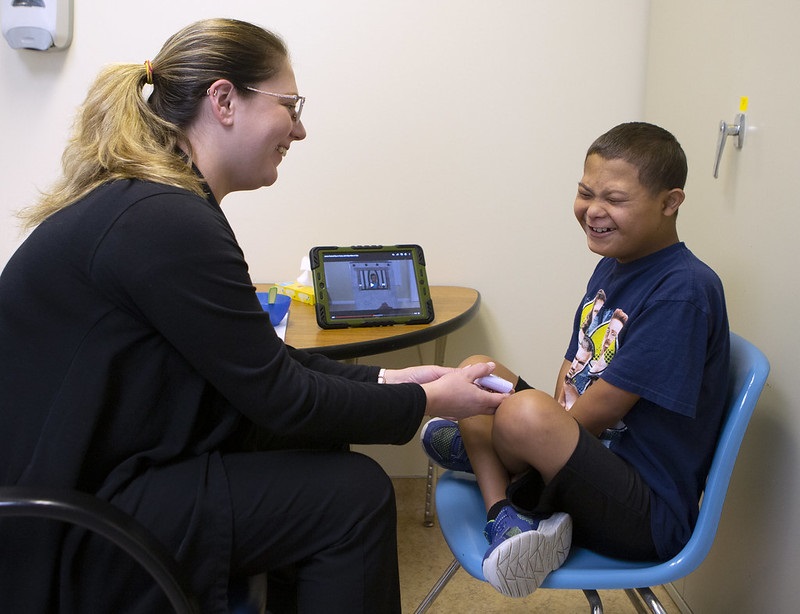 Fifty-four minutes. That’s how long Dr. Keith Williams persevered, brushing off the boy’s angry words, tears and fists as he waited for him to take a bite.

“Our job is to teach him to eat a wide enough variety of foods to correct his nutritional deficiencies,” said Williams, director of Penn State Children’s Hospital Feeding Program, who uses a behavioral tool called “shaping” that works by encouraging the child to take a tiny bite of new food to receive a reward, and then gradually larger bites of this food.

Watch video: Meet one young boy who is learning to eat solid food for the first time at the Feeding Clinic:

Twenty-five times that day, Whitney Adams, intensive feeding therapist, went through the same ritual with Jesus. By the next day, he took a bite of applesauce in 21 seconds. A week later, the Harrisburg boy barely hesitated. His smile grew wide when his reward – five minutes of uninterrupted play on his iPad – was handed to him.

“We hope that eventually he will eat the foods because he likes them,” Williams said. “It’s always the hope that the food will become its own reward.”

The Children’s Hospital Feeding Program, which offers outpatient clinics and an Intensive Day Treatment Program, stands out above the rest because of its multidisciplinary team – including a behavior psychologist, nutritionist, speech pathologists, gastroenterologist and feeding therapists – and a continuum of care from the day clinic to outpatient care, Williams said.

The team sees a wide range of children with feeding problems, including food refusal, food selectivity, choking phobias, chewing or swallowing troubles. The team also works with children who have mealtime behavioral issues, won’t swallow their medications, are tube-dependent or, like Jesus, eat too few foods to the point of nutritional deficiency. 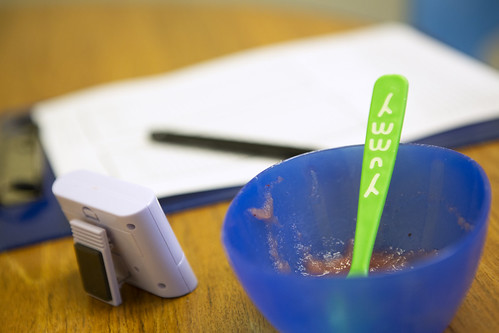 For most of his life, Jesus consumed only Fig Newtons, French fries, chips and milk. He has Down syndrome and autism, which can make him resistant to change, his mother, Soniris Arroyo, said.

“I knew his diet wasn’t good for him, but he would act out so horribly and hurt himself when I said ‘no,’” she said. “It was easier just to let him eat what he wanted.”

Jesus was iron deficient, thanks to a diet too high in milk. His lack of fruits, vegetables and protein meant he was headed for a feeding tube if things didn’t change.

Recently, Arroyo quit her job as a medical records supervisor so that she could take her son to the Intensive Day Treatment Program, which, at seven hours a day for four weeks, is not for the faint of heart.

“The first three to four days, he was hitting Dr. Williams and Whitney,” his mother said. “It was a shock to see my son behaving like that.”

As time went on, however, Arroyo saw her son understanding the message – if he wants a reward, he must eat what is offered. She began practicing the same shaping technique at home and, after a few days, Jesus was bringing the applesauce to her so he could move onto the foods he really wanted.

“It’s really more about me learning patience and thinking in baby steps,” Arroyo said. “At least he’s eating, and that’s my happiness.”

Three weeks after treatment, Jesus continued to eat the foods he learned to eat in the intensive program both at home and school.

It might get worse before it gets better, but most children in the Intensive Day Treatment program do succeed, Adams said.

The Children’s Hospital is one of the few feeding clinics in central Pennsylvania that works with children who have autism, Williams said. Three behavior analysts on the team specialize in helping these children, who may be selective eaters due to sensory issues.

“These are kids that are beyond picky eaters – they exclude entire food groups,” Williams said. “They may have an aversion or phobia to foods.”

Williams says the feeding program receives numerous referrals not only from within Penn State Health but also from Geisinger, UPMC Pinnacle and Children’s Hospital of Philadelphia.

These significant medical issues can preclude children from learning to eat at the normal time, which means they must learn how to chew and swallow later.

“Most of the work is done by the tongue, but these kids haven’t learned how to use the tongue to move food over to their teeth for chewing,” Williams said. “Coordinated muscle movements have to occur for that to happen. The challenge is that all of this is happening inside a kid’s mouth, where you or he can’t see it.”

Williams loves the work, but mostly he loves the kids.

“While we work with a population of kids with difficult behaviors,” he said, “there is nothing more rewarding than hearing from their parents that they ordered from a menu for the first time or they are able to discontinue a feeding tube because they eat.” 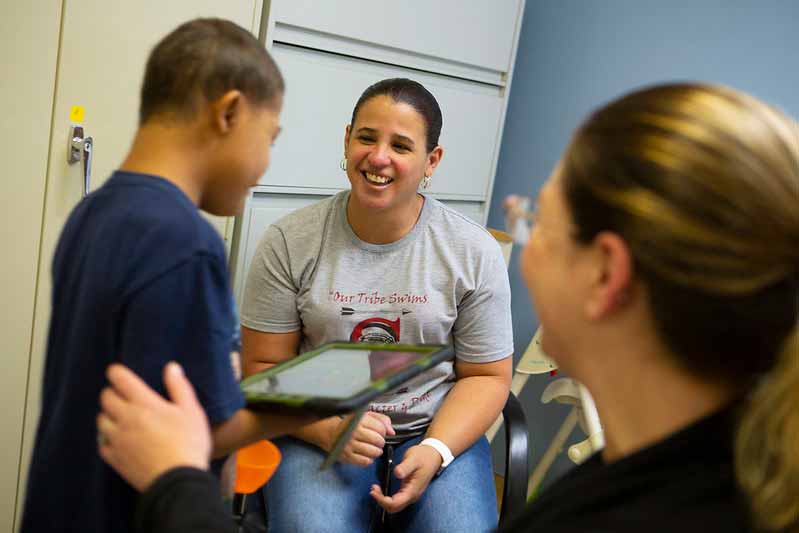