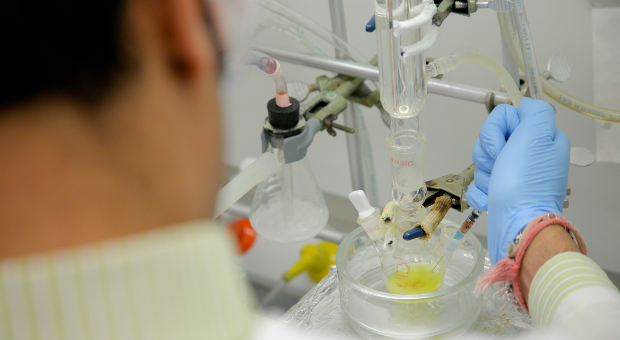 A substance that comes from pine bark is a potential source for a new treatment of melanoma, according to Penn State College of Medicine researchers.

Current melanoma drugs targeting single proteins can initially be effective, but resistance develops relatively quickly and the disease recurs. In these instances, resistance usually develops when the cancer cell's circuitry bypasses the protein that the drug acts on, or when the cell uses other pathways to avoid the point on which the drug acts.

“To a cancer cell, resistance is like a traffic problem in its circuitry,” said Gavin Robertson, professor of pharmacology, pathology, dermatology, and surgery and director of the Penn State Hershey Melanoma Center. “Cancer cells see treatment with a single drug as a road closure and use a detour or other roads to bypass the closure.”

Penn State researchers may have solved this problem by identifying a drug that simultaneously creates many road closures.

The researchers screened 480 natural compounds and identified leelamine, derived from the bark of pine trees, as a drug that can cause this major traffic jam in the cancer cell's circuitry.

“Natural products can be a source of effective cancer drugs, and several are being used for treating a variety of cancers,” said Robertson. “Over 60 percent of anti-cancer agents are derived from plants, animals, marine sources or microorganisms. However, leelamine is unique in the way that it acts.”

Leelamine could be the first of a new unique class of drugs that will simultaneously target several protein pathways. Researchers found that this drug shuts down multiple protein pathways, such as PI3K, MAPK, and STAT3, at the same time in melanoma cells. These pathways are involved in the development of up to 70 percent of melanomas. Protein pathways like these help cancer cells multiply and spread, so shutting them down helps kill the cells.

“The cancer cell is addicted to these pathways,” Robertson said. “And when they are shut down, the bypass routes cannot be used. The result is the cancer cells die.”

Leelamine works by shutting down cholesterol transport and its movement around the cancer cell. By shutting down cholesterol transport and movement, the exceptionally active survival communication that cancer cells require is shut down. The end result is death of the cancer cell. Since normal cells are not addicted to the same high levels of activity in these pathways, the drug has a negligible effect on them.

The researchers showed the results of this unique drug on cells growing in culture dishes and in tumors growing in mice. Leelamine inhibited tumor development in mice with no detectable side effects.

Researchers report their results in two back-to-back articles in a recent issue of Molecular Cancer Therapeutics.

Leelamine is the first of a new class of potentially viable drugs for the treatment of melanoma. More research must be completed before it can be tested in humans. Penn State has a patent for this discovery and has licensed it to Melanovus Oncology for the next series of experiments to enable it to be tested in humans. Melanovus Oncology is partly owned by Penn State and Robertson.