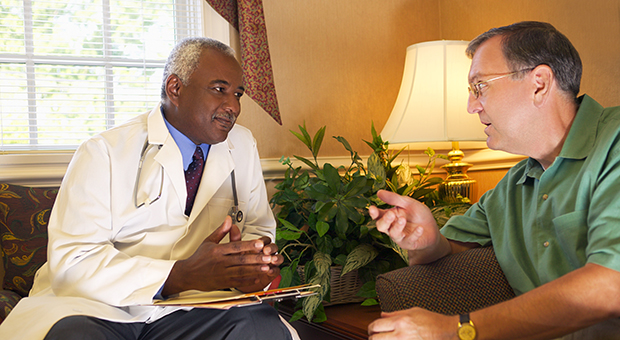 Fewer men are being diagnosed with and dying from prostate cancer these days. While that is due in part to widespread awareness and better treatment, it is also the result of more judicious screening.

Prostate cancer is the most common cancer in men and the second-leading cause of cancer-related death in men following lung cancer. In 1995, when a test came out to measure the PSA, or prostate specific antigen, in the blood, the number of diagnoses spiked. During the past 20 years — especially the past five or six — there has been an annual reduction of 3 to 4 percent in diagnoses.

Awareness certainly plays a part in that. Most men know that they should get screened once every year or so once they hit age 50 because early detection leads to more effective treatment.

“If you're under 50, you are at low risk, and if you’re over 70, you're probably going to die of some other cause,” says Dr. Jay Raman, associate professor of urology at Penn State Hershey.

Those most at risk are men whose father or brother have been diagnosed, as well as African-American males and those who eat high-fat diets that have been known to increase the likelihood of developing other cancers.

Raman says there is discussion within the medical community about the necessity for and frequency of prostate screenings.

Just over two years ago, the U.S. Preventative Services Task Force gave a low grade to screening for prostate cancer, indicating no general benefit to it. The American Urology Association's position suggested that was a bit extreme and that men should still be screened, just in a more effective way.

New, more specific tests have been developed that — together with the PSA and a rectal exam — can determine the type, amount and aggressiveness of prostate cancer. Raman says a newer PCA3 urine test is good for potentially confirming an initial high PSA value prior to proceeding to prostate biopsy.

“We know now that not all prostate cancer is alike,” he says. “Some can be simply followed and observed and don't need active treatment.”

Advances in surgery in the last five to 10 years, coupled with more targeted radiation and new medications approved by the Food and Drug Administration also have contributed to lower death rates from prostate cancer once diagnosed.

Raman says the bottom line is to be aware, but not to over-treat.

“Screening is paramount because it can detect the disease before it becomes significant enough to be symptomatic,” he said. “But just like you don’t immediately start diabetes medication after a single high glucose test, you don't want to overreact to a single high PSA result.”

Penn State Hershey Cancer Institute will host a free screening on Monday, September 22 and Wednesday, September 24 from 5 to 8 p.m. in University Physician Center, Suite 3100 on the Medical Center campus. Appointments are available on a first-call basis. For more information and to register, call 1-800-243-1455.