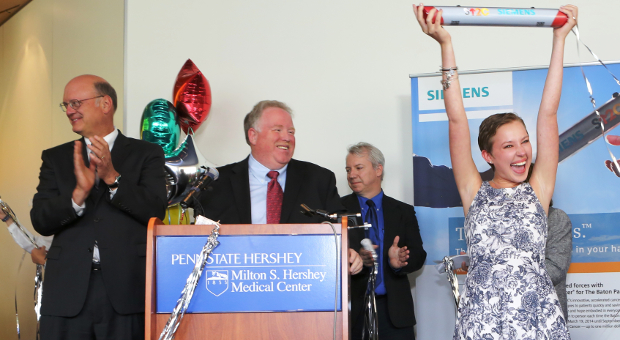 A nationwide effort to raise money for cancer research programs came to a successful conclusion Tuesday as a Lancaster County teen accepted the millionth pass of a baton at Penn State Hershey Children's Hospital.

Sarah Park, 17, of Manheim Township, Lancaster County, is expected to finish her successful treatment for leukemia in about a year. She was the millionth recipient of a baton that was passed for the first time on March 19 on the set of ABC's Good Morning America. Since that time, the baton has traveled thousands of miles across the U.S. and Canada. It has been passed through the hands of patients, family members, survivors, doctors, nurses and researchers, to serve as a symbol of hope to everyone who is on the front lines of the fight against cancer.

With the millionth pass of the baton, Siemens is donating $1 million to Stand Up To Cancer, a charitable organization that supports pioneering cancer research designed to get new therapies to patients quickly.

Park said she was honored to take part in Tuesday's event.

“The survival rates are extremely high compared to what they used to be,” Park said. “But we cannot be satisfied until every single person can be cured.”

>> Read more about The Baton Pass