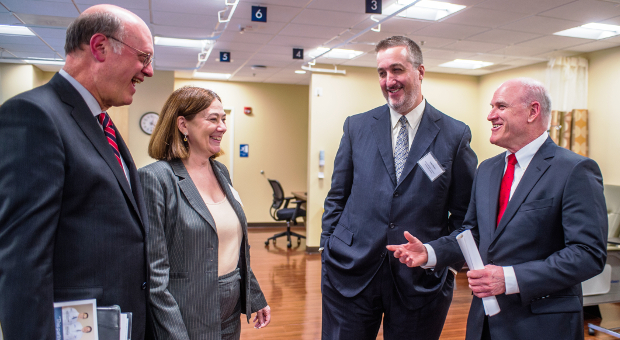 On Wednesday, Jan. 21, leaders from Penn State Health and St. Joseph Regional Health Network met in Bern Township, Berks County, to discuss key developments – and next steps – as Penn State's acquisition of St. Joseph moves forward. The proposed transfer will be reviewed by the Federal Trade Commission and the Pennsylvania Attorney General, as well as the Catholic Church.

Penn State Hershey leaders also met informally with St. Joseph physicians, members of the regional health network board and members of St. Joe's senior management. They toured the newly renovated and expanded infusion area in the St. Joseph Cancer Center, led by Dr. Marc Rovito, chair of the Division of Oncology, and Patty Gaul, who oversees the infusion center.

Robin Wittenstein, chief operating officer of Penn State Hershey Health System, noted that the partnership with St. Joseph has emerged out of the impact of the Affordable Care Act. She said Hershey and St. Joseph already have “a lot of smart people” working on strategies to keep more patients in Berks County and that, together, new programs will be developed for the community.

Dr. A. Craig Hillemeier, dean of Penn State College of Medicine, chief executive officer of Penn State Hershey Medical Center and Health System, and Penn State's senior vice president for health affairs, said Penn State Health and St. Joseph “have strengths that pair well together.” He said the driving focus is to provide the “best care for residents at the lowest possible price.”

“What we’ve found in our relationship over these many years is a great alignment and congruence in terms of cultures, mission and values,” said John R. Morahan, president and chief executive officer at St. Joseph.

Peter Banko, CHI's senior vice president of the east/southeast region, told the gathering that as CHI approached the transition process, it did so “with a great deal of thoughtfulness.” He said the focus was on transferring St. Joseph ownership to a health care organization that shared St. Joseph's and CHI's mission and values.

“Penn State Health is an organization with an outstanding reputation,” Banko said. “They are a recognized leader capable of taking St. Joseph to new heights in this challenging new era of health care.”