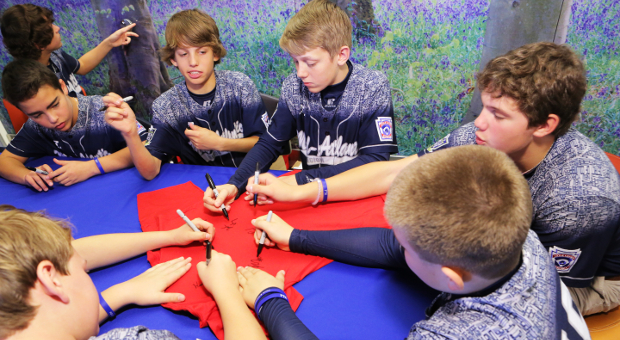 The Red Land Little League team that won the U.S. Championship in the 2015 Little League World Series presented $18,200 to Four Diamonds at Penn State Hershey Children's Hospital. The players and their coaches delivered the check during a visit that also included activities – such as crafts, photos and autograph signings – with Four Diamonds patients and their families.

>> View a photo gallery from the visit

“Winning the national title in Little League baseball was a tremendous accomplishment for us,” said team Manager Tom Peifer. “That achievement, however, pales in comparison to the additional treatment and excellent care this contribution will provide to Four Diamonds' children and their families.”

The Four Diamonds mission is to conquer childhood cancer by assisting children treated at Penn State Hershey Children's Hospital and their families through superior care, comprehensive support and innovative research. Because of the community’s steady and generous support, Four Diamonds has been able to assist 100% of the childhood cancer patients who have been treated at Penn State Hershey.

>> Read “Inspiration on various fields of play” (from InspiredTogether.org)

The donation to Four Diamonds is part of a total of more than $24,400 in donations raised by the team to combat cancer. The team is donating an additional $6,293 to the national Vs. Cancer Foundation.

The Red Land Champs and League collected the money from a variety of fundraising sources: a portion of sales of Red Land gear and apparel; online and mailed donations on the team's behalf; an auction of replica team jerseys; a portion of ticket sales at Harrisburg Senators, Lancaster Barnstormers and York Revolution games; contributions from local companies and a Pledge It homerun drive during the Little League World Series.

“We were excited to capture the United States Championship for Red Land Little League in Williamsport,” said Red Land player Cole Wagner. “But today, with the help of our incredible fans, the dollars we raised so far will take a big swing against cancer for the kids. We are proud to be on the Four Diamonds' team with these All-Stars in life.”

Mike McCauley, a Four Diamonds dad, praised the Red Land champions and League for their support. “You boys have provided a rare commodity for kids in a children's hospital: Smiles. Your success and your commitment to these children gave back some of the joy that had been stolen from them by this disease. The only thing better will be when we cure pediatric cancer,” McCauley said. “On behalf of Four Diamonds' children and their families, thank you, and keep on batting against cancer.”

“Thanksgiving is a wonderful opportunity for all of us to reflect on our blessings and how important it is to give back to our neighbors in need,” commented Scott Sozanski, president of Red Land Little League. “We encourage all Pennsylvanians to follow the lead of our champions, businesses and fans, and make a donation to Four Diamonds.”

#GivingTuesday, a global day for giving back, is December 1. Fans can access the Red Land Little League Four Diamonds' donation page through the website www.redlandlittleleague.com. Red Land Champions are engaged in fundraising activities for Four Diamonds and through THON, Penn State's annual dance marathon – the oldest student-run philanthropy in the world – as well as mini-THONs held at high schools across the region.