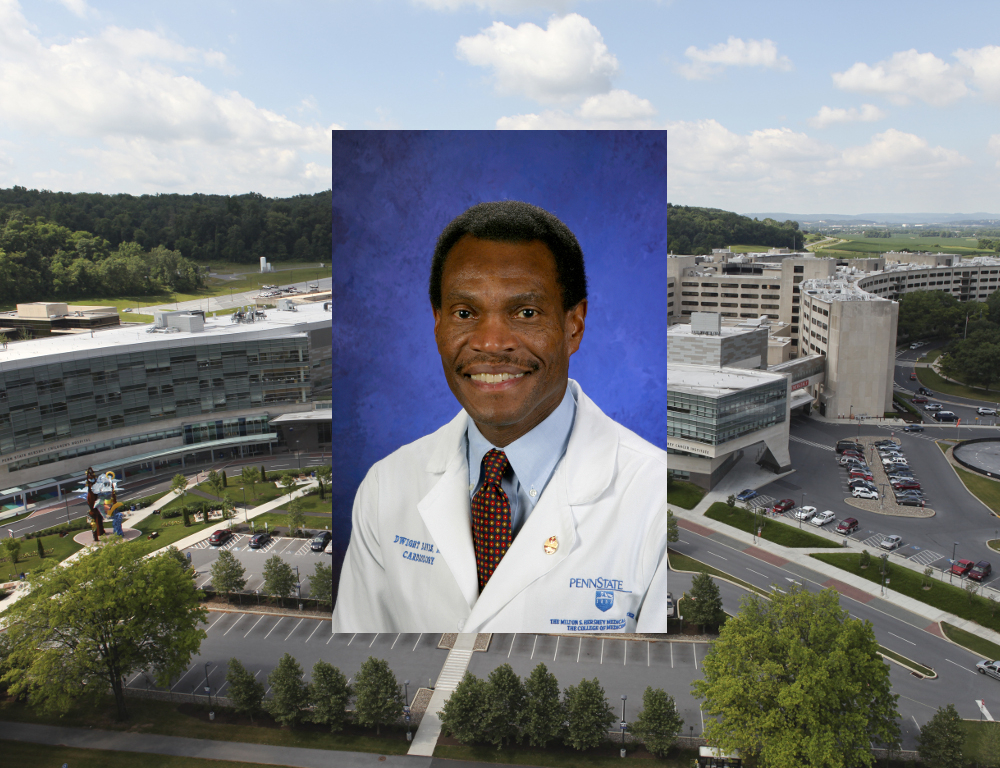 Over the course of a 25-year career as a cardiologist, professor and administrator at Penn State College of Medicine, Dwight Davis has had the opportunity to work with a dedicated team of colleagues, practicing medicine and teaching new generations of doctors. Davis said his career at Penn State has provided him with continuous opportunity to learn and grow in a highly dynamic field.

“My career here at Penn State has been wonderful,” Davis said. “It allows me to do a number of things that I truly enjoy: Patient care, teaching medicine to highly talented students and residents, and working with the admissions committee to help select the excellent students who come to study and learn medicine in our M.D. program.”

Davis is a professor of medicine at Penn State Heart and Vascular Institute; senior associate dean for admissions and student affairs in the College of Medicine; and director of the Cardiac Rehabilitation Program and a member of the Heart Failure / Cardiac Transplantation Service at Penn State Health Milton S. Hershey Medical Center.

In his youth, Davis received critical support and encouragement from a few key individuals – support that set him on a path from simple beginnings to his current position.

“I come from a modest background and grew up in a neighborhood in which education was not a common scenario for a lot of my friends,” said Davis, who grew up in post-World War II Winston-Salem, N.C. “I have had so many opportunities because three people, in particular, helped me along the way when I was young: a high school science teacher; my department chair in college; and a cardiology mentor who helped me in medical school. I was the first in my family to attend college and would not have gotten there and further without their help, putting wind in my sails along the way.”

Davis said his sustained success as a clinician, teacher and leader can be attributed in large part to colleagues and administrators who are highly collaborative and have been giving of their time and support.

“Everything I have accomplished, I've accomplished because of others who have helped. My colleagues and leadership in the College of Medicine have played a significant role, and my students are a constant source of learning and inspiration for me,” he said.

In 2004 Davis was elected by colleagues to a leadership position with the Association of American Medical Colleges Group on Student Affairs and served as national chair. In 2005, he was selected by the Joy McCann Foundation as one of four McCann Scholars honoring outstanding mentors in medicine and science. In 2011 he was a member of the national committee for the new Medical College Admissions Test.

In addition to clinical responsibilities, Davis has served in a number of positions at the Hershey Medical Center and College of Medicine including director of the Heart Station, director of the Cardiology Fellowship Program, director of the Cardiac Catheterization Laboratory, chair of the Pharmacy and Therapeutics Committee, and medical faculty representative to the University Faculty Senate. He was selected assistant dean for admissions and chair of the Medical Student Selection Committee in 1994 and appointed associate dean for admissions and student affairs in 1999.

Davis also has been the recipient of 14 teaching awards, granted by students and residents in  Penn State College of Medicine. He said these awards are among the most rewarding for him, given his own experience with highly influential teachers and mentors. The awards have come in the midst of significant change in the approach to teaching medicine.

Even in the past several years, Davis said, the College of Medicine's approach to teaching the next generation of doctors has shifted significantly.

“Over the time that I've been here there clearly have been tremendous advancements, both in medicine and in the general approach to teaching medicine, and the College of Medicine has been at the forefront of many of those changes,” he said. “Over the last several years, we have been putting heavy emphasis on the importance of students learning about medicine in the context of a clinical setting, interacting with real patients.”

Davis said students have their first contact with patients within the first weeks of medical school, splitting time between the clinical setting, group learning in the classroom, and interacting with library staff and resources.

“This is vastly different from my experience in medical school more than 25 years ago – my contemporaries and I were almost entirely divorced from patient care and clinical experiences for the first two years. We dreamed of clinical training, of interacting with patients.” Now, he said, students engage in “problem-based learning,” an approach focused on teaching the underpinnings of medicine in the real-life, highly relevant context of patient care.

“However,” he said, “enthusiasm for treating patients can't supersede scientific knowledge.  Good clinicians come from a combination of situational understanding, and while some is gained sitting by a bedside, much also comes from sitting in a library, studying.”

Davis regularly impresses the importance of a balanced approach to learning onto his students. Also, speaking from personal experience, he encourages them to pursue all open doors with vigor.

“Take advantage of every learning opportunity that you have as a student,” Davis said. “One of the best things you can get is exposure to basic scientific knowledge.”

Davis didn't decide that he wanted to pursue a career in medicine until he had completed a bachelor's degree in engineering physics at North Carolina Agricultural and Technical University in Greensboro, N.C. To this day, he said his background in physics is still an asset. “Most of the basic sciences have applications to the way we make decisions in medicine,” Davis said.

“It really has been a thrilling experience to be at the leading edge of a changing field with my colleagues. I have had the opportunity to work in an environment that has pursued advancements in patient care and the way we go about helping our students to grow and develop,” he said. “I take a lot of enjoyment out of talking to the many successful students who have graduated from our medical school and feel proud that I've been able to play a small role in their success. Broadly, their success is a testament to the quality of our faculty, and to the quality of the students who come through our admissions process. Our students are as good as any in the country and can hold their own against anybody else.”

“I've been fortunate. All of the students and residents that I've had the opportunity to work with have been very special people. They all come here with strong backgrounds, and they all go on and do outstanding work,” Davis said. “I've enjoyed working with all of them.”

In partnership with the Office of Strategic Communications, the Office of the Vice Provost for Educational Equity at Penn State is introducing an ongoing series titled Penn State Faculty Profiles in Diversity and Inclusion. Profiles will be distributed periodically on Penn State News and will explore the teaching and research accomplishments of featured individuals. The series will cast a specific light on the ways each individual’s background informs his or her work as a faculty member and more broadly as a member of the University community.