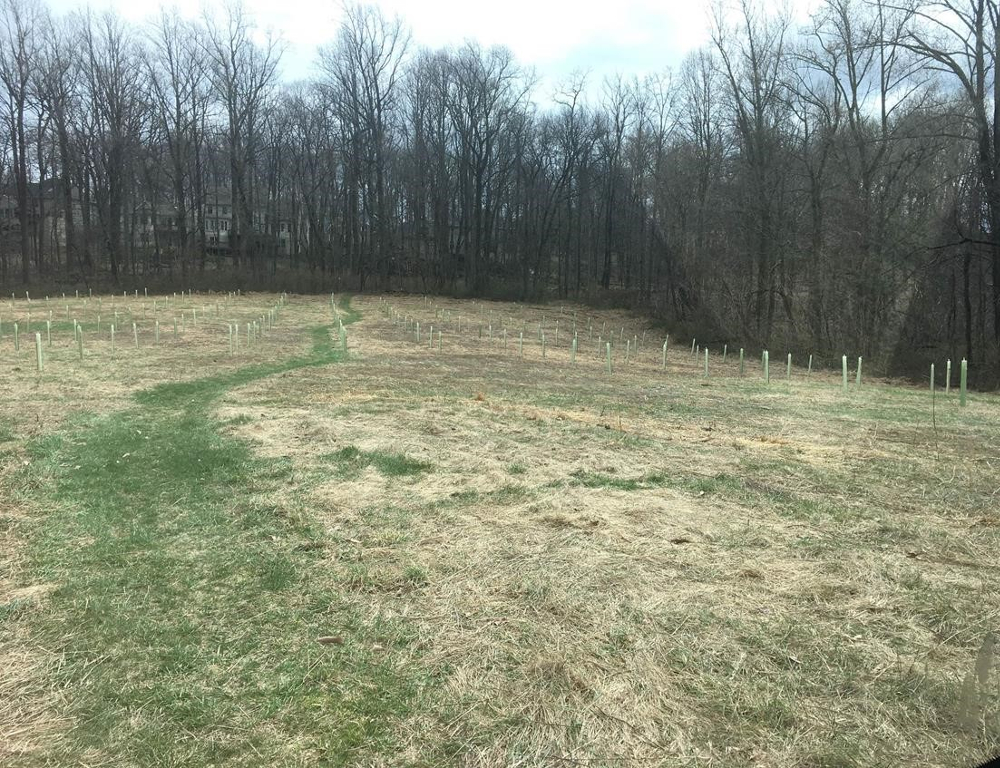 While Penn State Health Milton S. Hershey Medical Center is known for the exceptional medical care it provides, there's another kind of care that's a top priority at the health campus as well – care for the environment.

Three recent initiatives underway inside the buildings and outside on the grounds are examples of how the health system strives to support growth in a smart, environmentally conscious way.

One of these efforts gets underway on Earth Day (April 22): A reforestation project on the southwest portion of the Hershey campus will add almost 2,400 native trees across a 13-acre area. Red maples, shagbark hickory, tulip poplar, white pine, white oak, chestnut oak and red oak will be planted by community residents, school groups and other local volunteers.

Trees are important players in a sustainable environment because they improve air quality; reduce the amount of storm water runoff, which in turn reduces erosion and pollution of waterways; provide food and protection for birds and animals and reduce the need for mowing.

On hand for the Earth Day planting will be representatives from Derry Township as well as the Pennsylvania Department of Conservation and Natural Resources and Penn State Extension, who gave guidance, design input, planting instruction and volunteer oversight to the project.

“This project is part of our landscape plan, which is a multi-year effort. In 2013, we redid the landscaping in front of the Crescent building on campus and we've added bike and walking paths,” said Marvin Smith, director of facilities at the Milton S. Hershey Medical Center and Penn State College of Medicine. “We continue to focus on improving the connecting trails – some of our pathways connect to the Derry Township bike path, and we welcome community residents to use our paths.”

The landscape plan also calls for replanting the steep slopes on the south side of the health campus with ground cover so they won't have to be mowed.

“We take great pride in our campus appearance and our landscaping. Many people drive by our campus, along Route 322,” Smith said.

And maintaining the bucolic surroundings isn't just for passersby. “All of our patient rooms have windows. Many studies show that a room with a view of the outside helps with the healing process,” Smith said.

The Medical Center and College of Medicine also demonstrate commitment to the sustainability by looking for opportunities to minimize their energy footprint. The campus began implementing a multi-phased Energy Saving Program in 2009. Two of the latest initiatives are a chilled water optimization system, begun in June 2016, and the construction of a cogeneration plant, set to open in October 2018.

“We have what I would consider a fairly robust energy program that we are expanding into a broader sustainability program,” Smith said. “We're working hard to ensure that construction, maintenance and other activities we do will have a reduced environmental footprint and a reduced cost impact.”

The Medical Center's chilled water optimization system at the central utility plant annually saves about 4.16 gigawatt hours of electricity – which is equal to the annual electricity usage of 431 homes – or approximately $300,000. Annual carbon reduction from the project equates to carbon sequestered by 2,765 acres of U.S. forests in one year.

Using refrigeration, a chiller barrel chills water that is then pumped throughout the building via chilled water piping. As it passes through a coil, the heat exchange process takes place and the heat in the air is absorbed into the coils and then into the water, which is then pumped to the chiller to have the heat removed. To put it simply, the chilled water absorbs the heat from the building and then returns to the chiller, where the heat is removed from the water using the refrigeration process.

The chiller is nothing new to the Medical Center; what's new is computer modeling that implements controls that change production from a constant speed to a variable speed, based on factors such as outside conditions and demand for chilled water, said Kevin Kanoff, campus energy engineer.

It's like the difference between an old air conditioning unit that has only an off/on switch and newer units that have sensors to detect humidity and temperature so that the system comes on and off as needed instead of running full-blast continuously, Smith added. The system saves energy by constantly adjusting pumps and fans.

Thanks to the project's energy savings, the Medical Center last week received a check for $415,699 from PPL through the Commonwealth of Pennsylvania Act 129 Energy Efficiency Incentive program, bringing the Medical Center's total rebate from the program to just shy of $1.5 million.

The upcoming combined heat and power – or cogeneration – plant being added to the central utility plant will cost-effectively convert natural gas into electricity and steam, Kanoff said.

“The reason hospitals do this is because we have a large steam demand year round through the heating, ventilation and air conditioning system and from cooking in the kitchen. In our building in the summer, we may need cooling in one room because a lot of heat is generated, but the next room is an office that doesn't generate a lot of heat,” he said.

By using all of the steam, which is a byproduct of the conversion of natural gas to electricity, the annual utility bill will be reduced by about 25 percent.

“The cogeneration plant has a much higher efficiency than our existing boiler system,” Kanoff said. “It will serve as a backup for us in case of an emergency or a power outage. It gives us resiliency.”

The cogeneration plant will meet 54 percent of the annual electric power demand of the Medical Center and College of Medicine's Hershey campus, Kanoff said. That translates into a reduction in CO2 emissions in the region by 46,000 tons per year – the equivalent of taking 7,551 cars off the road or removing carbon emissions from 2,157 homes.

Through its conservation efforts and multi-faceted Energy Saving Program, Hershey Medical Center has reduced the carbon footprint of the facility by 67,010 metric tons. Other initiatives in the program included efforts to make campus lighting and the heating, ventilating and air condition systems more efficient, Kanoff said. Total accumulated cost avoidance through the end of June last year was more than $9 million.