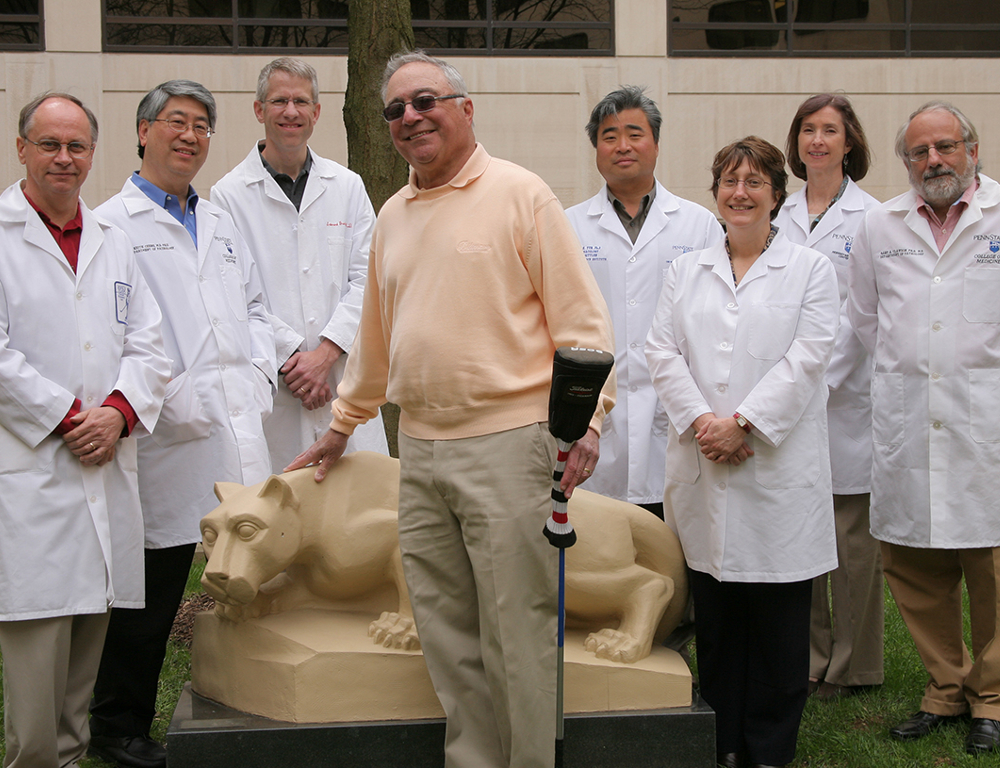 The Penn State Cancer Institute and broader Penn State community are mourning the passing of alumnus and longtime cancer research philanthropist Warren Gittlen. With support from his wife Allene, daughters Sharon Gittlen Etter and Nancy Gittlen Silverman, and many other family members and friends, Gittlen built a family legacy that includes nearly 50 years of championing the cause of cancer research and inspiring life-saving discoveries. Gittlen is a 1955 graduate of Penn State.

After Gittlen lost his father to cancer in 1970, the former captain of the Penn State golf team channeled his love for golf and for his father into establishing the Jake Gittlen Memorial Golf Tournament. The first event was held later that year and garnered $2,500 to support the work of Dr. John Kreider, a young scientist at Penn State College of Medicine. Kreider later became one of the top cancer researchers in the world, with his studies on the human papilloma virus (HPV) that eventually led to the development of the world's first cervical cancer vaccine.

For 48 consecutive years, the Jake Gittlen Memorial Golf Tournament attracted the best U.S. amateur golfers—including 15-year-old Jim Furyk in 1985—and became the largest and longest continuously-running, amateur charity golf tournament in the country. Warren's enthusiasm for the cause was undeniable, and through his tireless efforts, he engaged a growing number of individual, community, and corporate partners to join him in the fight against cancer.

Giant Food Stores was the Tournament's primary sponsor for more than 30 years. “Giant has lost a great friend and a true visionary,” said Nicholas Bertram, president of Giant Food Stores. “We will all miss the spark of his eye, his boundless energy, and we will never forget Warren's dream to honor his father's memory. It was our privilege to join him in his relentless fight against cancer, and we are humbled to be associated with his legacy.”

In the mid 1990s, Warren and the tournament formed what is now the Jake Gittlen Laboratories for Cancer Research at Penn State Cancer Institute. Today, these labs support the work of seven primary investigators and their research teams. “Warren took a very personal loss and transformed it into an opportunity to give other families facing cancer hope for a better future,” remarked Dr. Ed Gunther, one of the Gittlen researchers. “His inspiration and leadership will be sorely missed.”

In total, the Gittlen family and the Gittlen Memorial Golf Tournament have contributed more than $28 million in support of cancer research. “No other individual has done more to advance our cancer research efforts over the last several decades than Warren Gittlen,” said Dr. Craig Hillemeier, dean of Penn State College of Medicine; CEO of Penn State Health; and Penn State's senior vice president for health affairs. “He brought people and companies together, and their collective generosity and advocacy have helped our teams at Penn State Cancer Institute translate discoveries into more effective methods of prevention, diagnoses and therapies that benefit individuals across our region and far beyond.”

Dr. Neil Christensen, director of the Jake Gittlen Laboratories for Cancer Research, echoed this idea saying, “Over the years, Gittlen support has sustained many promising studies that have experienced a gap in funding for one reason or another, and our scientists have also been able to leverage this support to secure additional extramural funding.”This additional support, a majority of which has come from the National Institutes of Health, now amounts to more than $65 million.

“I personally owe a great debt of gratitude to Warren,” said Christensen. “Dr. Kreider recruited me to come to Hershey with support from the Gittlen Tournament.”

“Warren's longstanding support has been absolutely essential to the growth and development of our research and clinical missions,” said Dr. Ray Hohl, director of Penn State Cancer Institute. “Our teams would not be leading innovation and providing the kind of advanced, integrated cancer care that they are today without his philanthropic leadership. Even as we mourn his passing, we celebrate his extraordinary life and generosity.”

“Warren was a proud Penn Stater, and a great ambassador and champion for advancing research,” said Penn State President Eric Barron. “His vision and commitment strengthened our University, and the legacy he leaves is one that will improve health for generations to come.”

Today, when patients enter the Penn State Cancer Institute building on the Hershey Medical Center campus, they can see the Gittlen name throughout the first floor. The Jake Gittlen Memorial Golf Tournament Lobby and the Warren and Allene Gittlen Outpatient Clinic serve as a powerful reminder from one family touched by cancer to all others who will face the disease that they are not alone.

Even though the annual golf tournament has ended, fundraising continues under the Jake Gittlen Memorial Golf Tournament name, as longtime partners have vowed to keep the spirit of the Tournament alive through their own events, now in honor of both Jake and Warren. In lieu of flowers, the family has requested that memorial contributions be made to the Gittlen Cancer Fund, 4331 S. Victoria Way, Harrisburg, PA 17112, or online at gittlengolf.com.