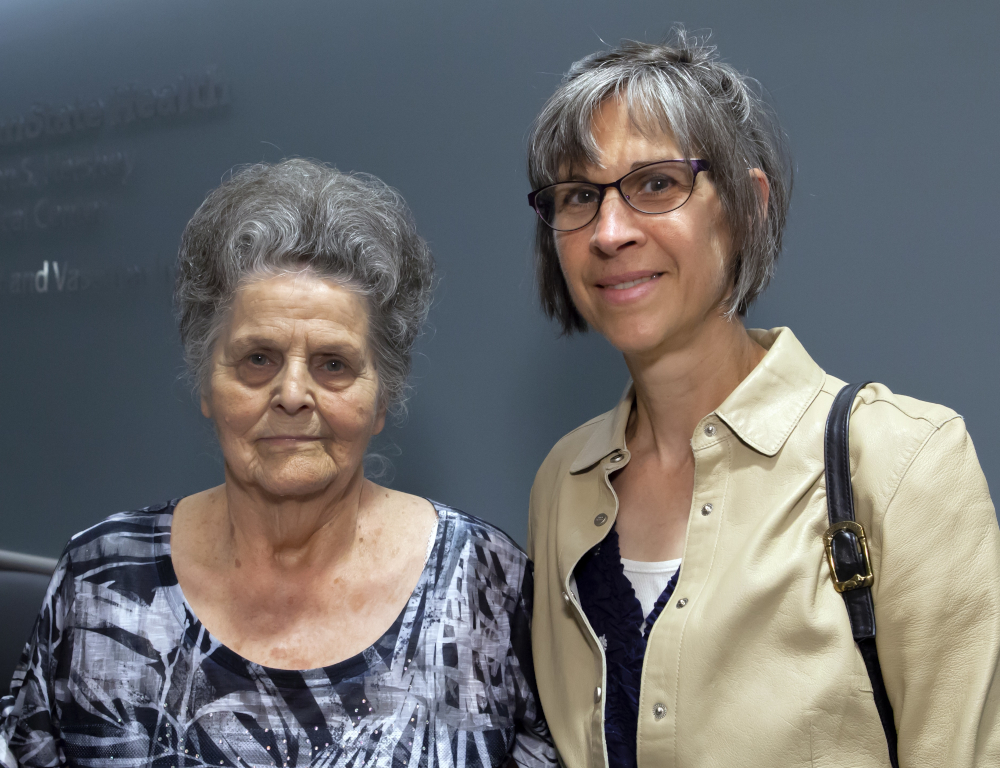 Eighty-four-year-old Josephine Kurtz cared for others as a nurse's aide, tended to elderly family members and still visits nursing home residents. Now, a selfless stranger is making it possible for her to make the long trek from her home to Penn State Heart and Vascular Institute.

Kurtz said she would never be able to drive from her Lewistown-area home to her appointments. That's when volunteer Paula Maness gets in her 2001 Honda minivan, drives about an hour to Kurtz's house and then travels at least another hour to Hershey.

The two met through a woman at Kurtz's church and have become friends during their many hours on the road and at appointments that included Kurtz's heart valve replacement.

“Paula is helping me out in more ways than I ever expected,” she said. She called Maness a “mother hen” who invited her to stay at her home for several days after heart valve replacement.

Maness, 57, of Bellefonte, said she's just happy to help. “When the time was right, God brought us together,” she said.

The women encountered a traffic accident during one trip and were late for Kurtz's HVI appointment. The staff ensured that she was still seen.

“Everybody has been very accommodating to Josephine and me,” Maness said. “They've just been very helpful, very kind.”

Dr. Mark Kozak is the interventional cardiologist who treated Kurtz. He said what Maness has done is above and beyond what the average person would do. “We see plenty of people who take next-door neighbors to appointments, but this was extreme,” he said.

Denise Rhodes and Ashley Heatley, both nurse practitioners, are the structural heart coordinators in interventional cardiology. Rhodes and Kozak said Maness has become a patient advocate for Kurtz.

“Often it is a family member who comes with the patient for appointments and procedures. The friendship that these two have forged from the selfless act of kindness sparked our interest,” Rhodes said.

Kozak said Maness educated herself about Kurtz's treatment and asked questions like a patient's adult child might do.

Maness said the staff recognized her efforts with flowers and a Sheetz gift card, which she appreciated.

It's no wonder her minivan is approaching 300,000 miles. This isn't the first time she has driven a patient to HVI. She helped a Bellefonte man travel to his appointments for a heart valve replacement in 2007.

His family thanked the Maness family in his 2017 obituary for caring for him after his debilitating stroke.

Maness said Kurtz was initially uncertain about how far she wanted to go in treating her cardiac issues. Knowing that Kurtz still visits nursing home residents, Maness told her that getting treatment would allow her to continue “God's work” in the nursing home.

Kurtz is determined to continue that mission. “I'll not let that down till I lay down and die,” she said. She helps residents get to various activities.

Kurtz grew up in a large family. When her oldest brother became ill, she was his advocate during his temporary nursing home stay. She cared for him at home until he died at age 94.

She recalled her childhood when she had rheumatic fever, a disease that starts with strep throat and can damage the heart. “That was in hard times,” she said.

Rhodes said rheumatic fever can cause aortic stenosis, a progressive thickening and calcification that affects the heart valves, so that oxygenated blood isn't effectively circulated to the body.

Kurtz said she is feeling better since her heart valve replacement. She stayed with Maness and her husband, Tim, for a few days to recuperate.

“They are Christian women who believe that ‘helping your neighbor' is second nature. They acted like they were related, but they are not,” Rhodes said.

“I felt that God really brought us together,” Maness said.

“I'm just glad she was there for me.”

December is a time to celebrate holidays, diversity