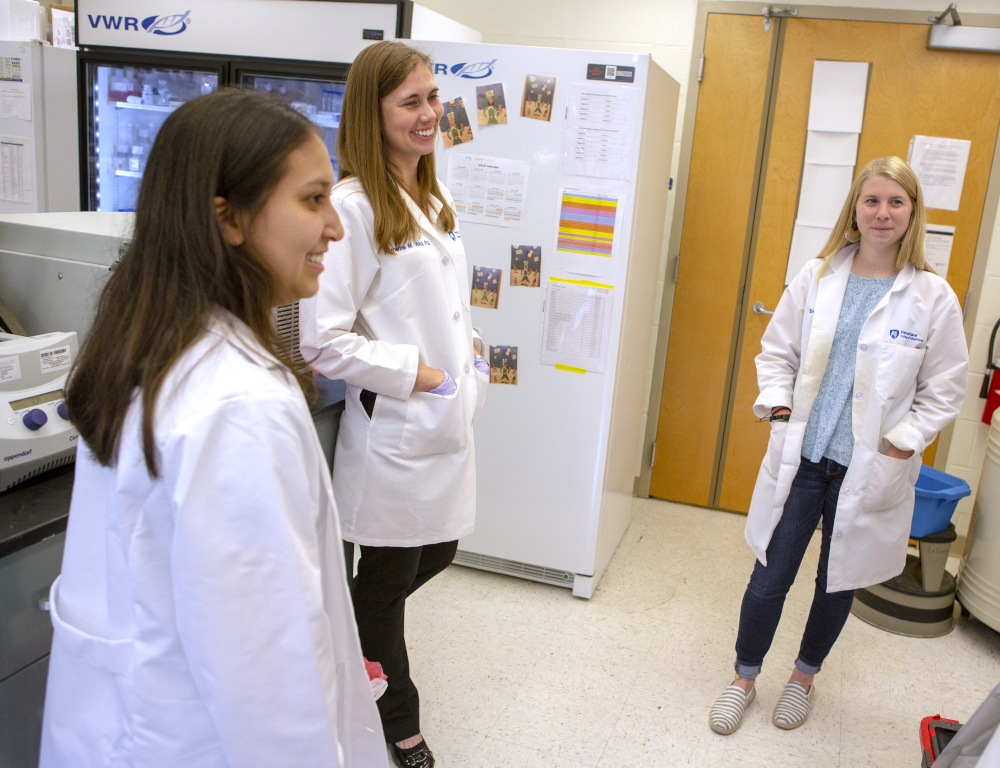 Katherine Aird, center, assistant professor of cellular and molecular physiology at Penn State College of Medicine, interacts with members of her team.

From aging to cancer—with quite a bit in between—Katherine Aird, assistant professor of Cellular and Molecular Physiology at Penn State College of Medicine, and her team have a whole world of research opportunities in front of them. This is not just because they have a lot yet to discover, as Aird insists they do, but because the progress they have made has incredibly broad potential impact.

The team’s latest research reveals that skin, pancreatic, bladder, ovarian and colorectal tumor cells may share a common target for new therapy approaches. In each cancer type, forcing a particular change in the cell’s metabolism (how it uses nutrients) may shut off or suppress its growth, essentially putting it to sleep.

This forced sleep state is known as senescence, and together with cell metabolism, it makes up the heart of Aird’s research.

“Senescence is normally what happens when your cells age. But it also happens in other settings,” says Aird, who has a PhD from the Department of Pathology at Duke University. “For instance, if a cell undergoes a mutation that could lead to a tumor, it has a sort of emergency shut-off—it will undergo the senescence process and just sit there. It’s an evolutionary way of cells not becoming cancerous.”

Unfortunately, that emergency shut-off isn’t the final destiny of some cells. Other things can happen that may change the cell yet again, causing it to lose that stopper and, in rare instances, start a tumor.

In the case of skin cancer, where this concept is best understood, the example often used to describe the concept is that of a sunburn and a mole. Some moles are made up of senescent skin cells that are critically damaged but shut off. However, if something like a sunburn occurs and causes yet another mutation in the cell or its metabolism, it may kick off cell growth that leads to cancer.

Aird and her team’s latest findings, which appear in a pre-print manuscript available on BioRxiv, suggest it may be possible to force that process to happen in reverse—putting tumor cells to sleep—or to otherwise kill cells living in the altered metabolic state.

Since this process of how cells eat and sleep, so to speak, appears to be important in several cancer types, Aird has now brought her lab’s investigations to bear on ovarian cancer, which is the deadliest gynecological disease and one of the least understood cancers. These two cell activities are also linked to the general process of aging and age-related diseases, including poor vision, arthritis and even Alzheimer’s disease.

“I think the whole world is ahead of us,” says Aird, who runs her own laboratory at Penn State Cancer Institute with funding from the National Cancer Institute and the U.S. Department of Defense, among other entities. “We have a great opportunity to make a difference for people suffering from cancer and other diseases by studying cell metabolism and senescence because scientists still don’t know a lot about it. I want to improve what we understand about human health so that others can take my work beyond what I can achieve in my lifetime.”

A passionate appreciation of incremental discoveries, unflagging commitment to rigorous and reproducible research and continued mentorship of the next generation of scientists embody Aird’s ultimate goals for the remainder of her career. That final goal is not to be taken lightly, either.

“Professor Aird is incredibly passionate about her research, and that enthusiasm is partly what made me want to work with her,” says Raquel Buj, an international postdoctoral researcher in Aird’s lab. “She’s the best mentor I’ve ever had, and she’s the type of scientist I want to become.”

Other members of Aird’s research team are equally complimentary and stress the optimism, dedication and open-minded investigative nature of Aird as some of her key highlights as a mentor. Both Buj and Erika Dahl, graduate student with Aird for nearly two years, applaud Aird’s support in encouraging them to learn new techniques and explore novel areas of cell metabolism and senescence as a key reason they appreciate her leadership.

“We are constantly given the opportunity to improve our skills and knowledge, and she supports us not just with our research but also in everyday life,” says Dahl. She and Buj feel so strongly about Aird’s commitment to them as people and as young scientists that they nominated her for a mentorship award earlier this year.

It’s clear the respect is mutual.

“I can’t stress how important the lab team is to this work,” says Aird, who says she has found the process of mentoring as rewarding as seeing the progress her mentees make in their scientific studies. “I’m here to help and guide and fund, but on a day-to-day basis, if they weren’t working their tails off, we wouldn’t be where we are.”

Everyone plays a role: New research and strategies shared at addiction symposium