Ask Us Anything About… Child Sexual Abuse 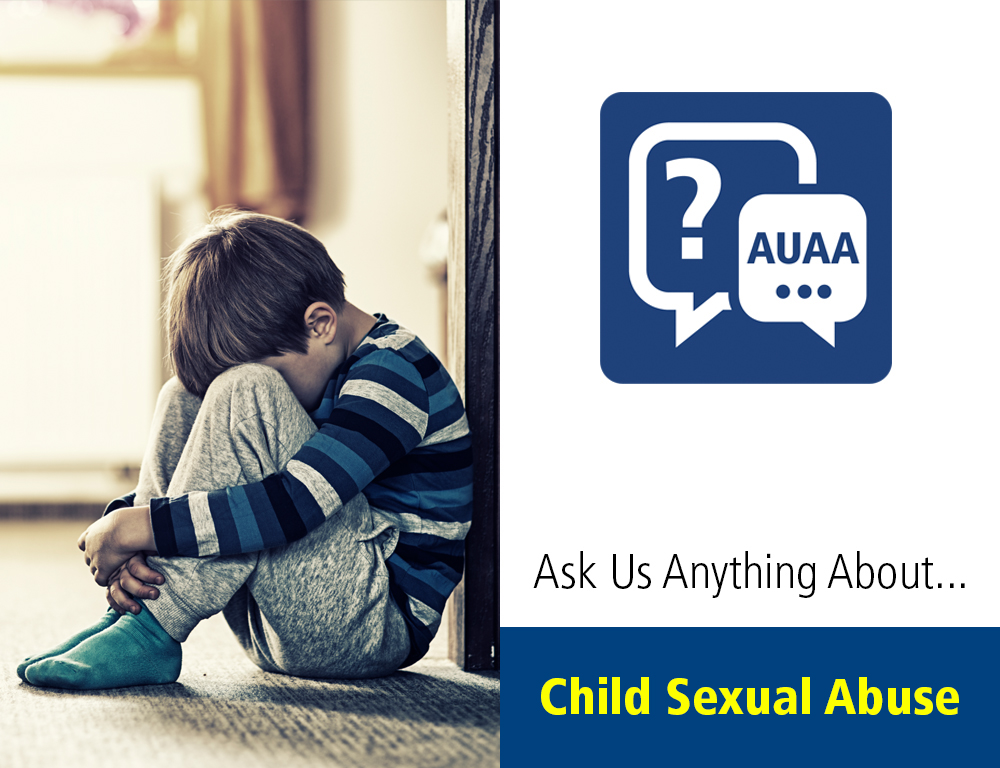 It hurts to think about anyone sexually abusing a child. But far too often, people don’t know what to do if they suspect a child is being harmed in such a manner. Whose responsibility is it to say something? And where can they turn? We get answers from Dr. Lori Frasier, director of the Penn State Center for the Protection of Children.

Description – The video begins inside Penn State Children’s hospital. Two people are standing next to each other inside a waiting room. From left to right is, Dr. Lori Frasier and Barbara Schindo.

Barbara Schindo – Okay. Good afternoon, I’m Barbara Schindo and you are watching “Ask Us Anything About Child Sexual Abuse” live from Penn State Health Children’s Hospital. It hurts to think about anyone sexually abusing a child but, far too often, people don’t know what to do if they suspect a child is being harmed in such a manner. Whose responsibility is it to say something and where can they turn. I’m here with Dr. Lori Frasier, the Director of the Penn State Center for Protection of Children at Penn State Health Children’s Hospital. And we welcome your questions for Dr. Frasier whether you’re watching live or on playback, just post them in the comment field. So, we’ll start by saying, Dr. Frasier, what are the signs that a child may be a victim of sexual abuse? And how might those signs differ in various age groups, say, from toddlers to teenagers?

Dr. Lori Frasier – So, most of the time, there are no real signs, that’s why we depend upon children telling us. It’s very unusual to actually see signs. Sometimes, it’s only behavioral. A child may regress in their behaviors. Where they were toilet-trained, they’re not anymore. That’s not a particularly specific sign, but it may be a sign of stress or distress in the child. They may develop regressive behaviors and not want to be as engaged with people. I think the behavioral signs are the most important. Physical signs are actually much more rare. People think that things like pain when kids urinate, and things like that, or redness are signs of sexual abuse. They’re actually – those are rarely signs of sexual abuse. So, it’s more often in behavioral signs that a child is distressed for some reason. They don’t want to visit a certain person. It’s important to listen to their behavioral cues.

Barbara Schindo – Okay, very interesting. So, at a risk of asking a question with a very obvious answer, whose job is it to report child sexual abuse?

Dr. Lori Frasier – It’s everybody’s job. And, in the state of Pennsylvania, anybody can report child abuse. Anybody can report child abuse anonymously. All people licensed in the state, or whose work is with children, doctors, nurses, volunteers in organizations, churches, everybody is obligated to report. But people, all citizens should feel a moral obligation to report.

Dr. Lori Frasier – So, under Pennsylvania law, there are between 14 and 16 different categories of mandatory reporter. But, the bottom line, is anybody who works with children or has contact with children or who is a medical provider is a mandated reporter.

Barbara Schindo – Okay. And what should we know about the process of reporting? Is there anything important for folks at home to know?

Dr. Lori Frasier – So, there’s always the call-in line, the ChildLine which is a call-in line that anybody can call in. I don’t have the number off the top of my head, it’s a 1-800 number. You can google “report child abuse in Pennsylvania” and the number will come up. Anybody can call that line. People can be anonymous. You do not have to give your name. And they will take your call. Mandatory reporters can also call ChildLine. And they need to say that they’re mandatory reporters and identify themselves as mandatory reporters. Mandatory reporters also have an option of reporting on the online system which, also, you can find at report child abuse in Pennsylvania. You can google that and get the child abuse reporting online system. That requires an online reporter to have established a user name and a password. You can access your previous reports as a mandatory reporter and, also on that same site, is where we access our child abuse clearances for our work.

Barbara Schindo – Okay. Again, you are watching “Ask Us Anything About Child Sexual Abuse” live at Penn State Health Children’s Hospital with Dr. Lori Frasier. And your last time that you did an “Ask Us Anything About”, you said we have a pretty solid system for reporting child sexual abuse in Pennsylvania. Could you expand on that, you know, what do you mean by that? And what improvements do you think still might be needed?

Barbara Schindo – Okay. And do you think that that system, there may still be some improvements needed?

Dr. Lori Frasier – There’s always improvements needed to expand the resources, the funding for advocacy centers. To have advocacy centers and trained medical providers in rural areas so families don’t have to travel long distances to have those kinds of resources that we have through our children’s hospitals and children’s advocacy centers that are spread out through the state. We have areas where we don’t have such robust response because, part of that is, if you have a lower population, you’re going to have lower numbers and people aren’t as experienced, including law enforcement and children and youth. But I think, for the most part, we need to make sure that everybody knows their obligation in reporting child sexual abuse and we have resources for that investigation within reach of families and children. And, importantly, that we have follow-up resources so that children can get help and families can get help after the fact. Because that’s also challenging.

Barbara Schindo – Again, we welcome your questions for Dr. Frasier, whether you’re watching live or whether you’re watching on playback, please post your questions or comment in the comment field below. So, give us an overview of the systems people can use to mandate, to report abuse. I know you had mentioned a little bit from mandated reporters to the general public.

Dr. Lori Frasier – So, the two systems are ChildLine for the general public and mandated reporters. And also the online reporting system. You can always call the police. You can always call 9-1-1. You can – and they’re obligated to report to Children and Youth Services too. They have the same obligations as anyone else. Some cases only remain under the privy of law enforcement because they’re not part of a caregiving role or a family role. They might be a sexual assault outside of the family by a stranger, by somebody who’s peripheral to the family. Those are not necessarily Children and Youth Services, they become exclusively law enforcement. You can call your local district attorney’s office and talk to them about resources for child sexual abuse. You can call the Pennsylvania Coalition Against Rape and the Rape Crisis Centers and have resources for sexual abuse. And they all will advise mandatory reporters to make a report. They’ll talk to the public about making an anonymous report if that’s necessary. But there’s a lot of people around that can help families with resources and to help reporters to report child sexual abuse.

Barbara Schindo – Thank you, that’s a lot of great information about resources available to you at home. How to find more information, how to make a report and what to do next. So, do some people saying – do some people fear or hesitate to say something or report child sexual abuse because they don’t want to get involved in what could become a very lengthy and intricate process. You know, including legal proceedings? Do you think that might deter some people from reporting?

Dr. Lori Frasier – Well, I do think it deters many professionals from reporting. They don’t understand the law. They think, if they don’t know for sure, they shouldn’t report. The law, basically, says a reasonable suspicion. I think other people who could anonymously report, maybe, don’t trust the fact that their names will be kept private and anonymous. But they’re really legally constrained to keep those names private. And you don’t even have to give your name. So, yes, and some people are just worried that they don’t know for sure. They want that 100% assurance. But that is not the standard, it’s reasonable suspicion. Maybe an investigation will show it wasn’t child sexual abuse, it was something else. And that would be important too.

Barbara Schindo – Okay. To what extent does disbelief come into play, especially when the perpetrator may be, you know, a well-known member of the community? It may be a teacher, clergy, sports coach?

Dr. Lori Frasier – Well, forever people have been reticent to support the words of children, teenager, boys and girls, even men and women against powerful well-known figures fearing that they won’t be believed. That they will be blamed. And that is clearly a problem that, when a child makes an allegation against an adult, that people don’t want to ruin an adult’s life based on what a child says. It’s not an automatic ruination of a life, it is a really serious thing to make an allegation of sexual abuse, but you don’t want to be the person who regretted not making that report because that child was abused over many years. And we still are hearing about that.

Barbara Schindo – Well, we’re just about to wrap it up here. Again, this is “Ask Us Anything About Child Sexual Abuse” and we welcome any questions for Dr. Frasier whether you’re watching live or on playback, just post it in the comment field below. Is there anything else, you’d like to add before we wrap it up?

Dr. Lori Frasier – No, just that we all should be responsible for the children in our communities and our lives and to help protect them. That’s all.

Ask Us Anything About... Living Organ Donation

Ask Us Anything About... Addiction

Ask Us Anything About... Rising COVID-19 Cases

Ask Us Anything About... Cardiac Rehabilitation

Ask Us Anything About... Chest Pain

Ask Us Anything About… Colorectal Cancer