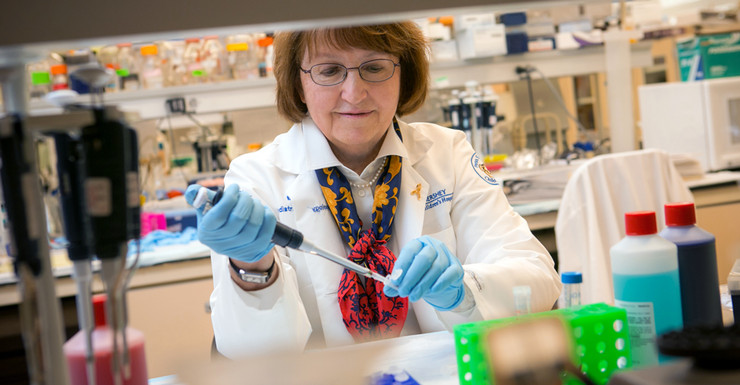 Thanks to the funds raised at Penn State THON to benefit Four Diamonds, more than 80 doctors and scientists at Penn State College of Medicine are able to conduct a full spectrum of cancer research, provide leading-edge therapies through a range of clinical trials, and play an important role in the advancement of pediatric cancer treatment and cure rates through participation in national and international consortia. Collectively, their efforts are focused on providing superior care to patients at Penn State Health Children’s Hospital, while contributing to the global pursuit of a cure for childhood cancer.

“We conduct laboratory-based research to better understand disease mechanisms in pediatric cancer and to identify potential targets in the molecular disease process to which new drugs can be directed,” says Dr. Miller.

The need for research dedicated solely to childhood cancer is great. According to the American Cancer Society and the American Childhood Cancer Organization, an estimated 16,000 children in the United States are diagnosed with cancer each year —that’s about forty-three children every day. While childhood cancer survival rates have significantly improved to eighty percent over the past forty years, one in five children will still die from their disease within five years of diagnosis.

“I think about my age and how long I have been doing this, and frankly I’m just so tired of going in and telling families there’s nothing more we can do for their child,” says Dr. Valerie Brown, who is the director of the Next-Generation Therapies program for Penn State Cancer Institute.

Through funding from Four Diamonds, Dr. Brown’s position as director of the Next-Generation Therapies program allows her not only the time, but also the resources necessary to garner national recognition for Penn State College of Medicine pediatric cancer research through participation in various nationwide consortia — groups of institutions in either a region or country and across the globe that come together with the same end goal. Working with these organizations gives patients access to new drugs and novel therapeutic approaches for cancers which are difficult to treat.

“Participation in these consortia allow us to test innovative and novel approaches in a way that is more efficient while minimizing risk to the patient,” says Dr. Brown. “They act as pipelines for the next generation of studies and the catalyst for a new approach becoming the standard in care after receiving the appropriate regulatory approval.”