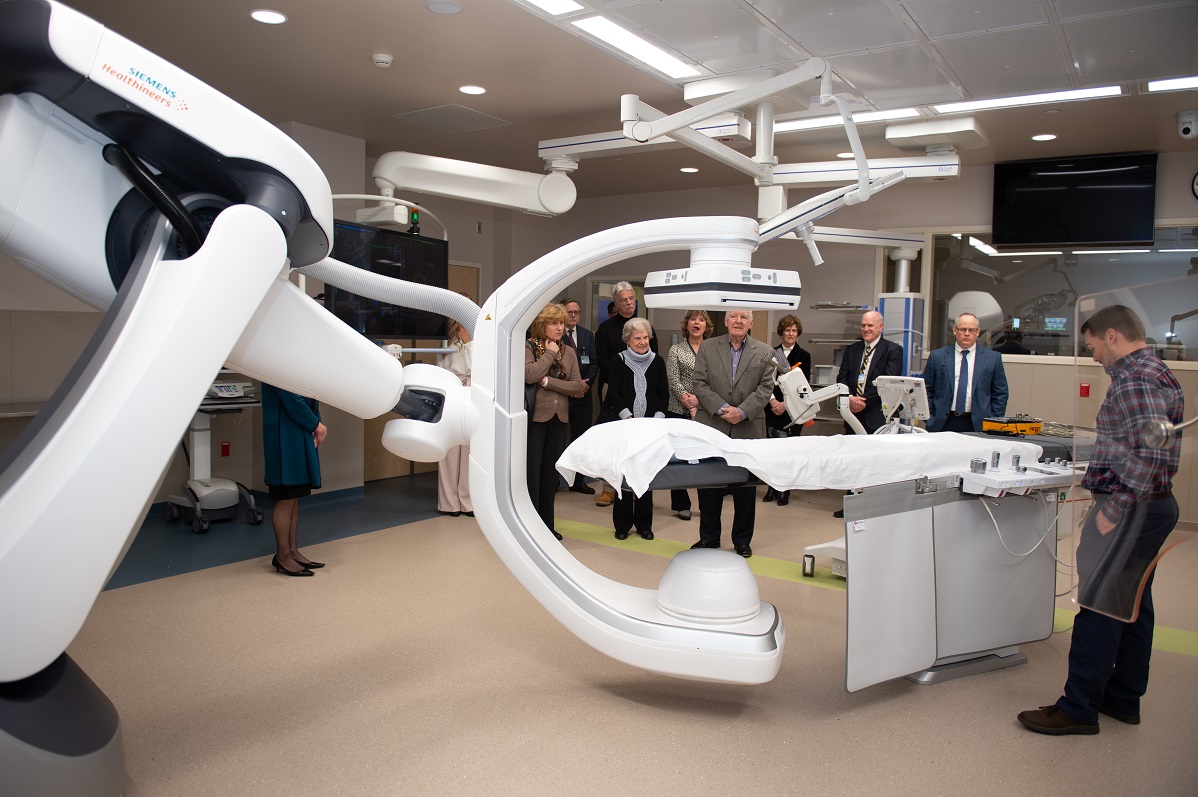 The hybrid lab combines the features of a cardiac catheterization lab with those of an operating room, which allows for more complex interventions. The single, hybrid space lets specialists perform a range of procedures to treat structural and coronary heart disease, repair endovascular aneurysms and even perform cardiac surgery, if needed – without moving the patient.

The lab is fully equipped with state-of-the-art technology, including the only Seimens Healthineers Artis Pheno robotic angiography system in eastern Pennsylvania. The robotic angiography system uses x-ray visualization to simplify procedures, such as allowing better valve positioning during cardiac interventions. The lab also features the latest modular booms and cameras, for documentation and collaboration between specialists during procedures, as well as a state-of-the-art control room from where the procedures are monitored. The technology and design of the space also provide the ability to expand to newer procedures in the future.

At an event held Monday, Dr. Guy Piegari, medical director of interventional cardiology, said plans for the hybrid lab were scoped out as far back as 2006, when the new hospital on the Bern campus was under construction.

The original designs were done in such a way so that the hospital could adapt and new technologies that be incorporated fairly easily, he said, noting that the requirements for a hybrid OR have changed over the years but the new room can now accommodate interventional cardiology, vascular surgery, interventional radiology and cardiothoracic surgery procedures.

“St. Joseph is committed to being at the leading edge of medical technology,” said Dr. Pat Sharma, chief of vascular surgery at Penn State Health St. Joseph Medical Center. “This level of clinical innovation speaks volumes about the medical staff and clinical leadership we have here to make all of this happen.”

“It was just a few weeks ago that we announced a significant investment in our cancer program, and we continue that momentum with this expansion of our Heart Institute capabilities,” said John Morahan, president of Penn State Health St. Joseph. “This is about emphasizing the investment that Penn State Health is making in St. Joseph and in the Berks community.”

This is the first part of a five-phase, $13.5 million project to reconfigure four existing cardiac catheterization labs to create two new hybrid labs, while also equipping an existing electrophysiology lab and two remaining cardiac catheterization labs with the latest technology. This multi-phase project was supported in part by a grant through the Redevelopment Assistance Capital Program, with the support and assistance of en. Judy Schwank. The grant was announced by Gov. Tom Wolf last August.