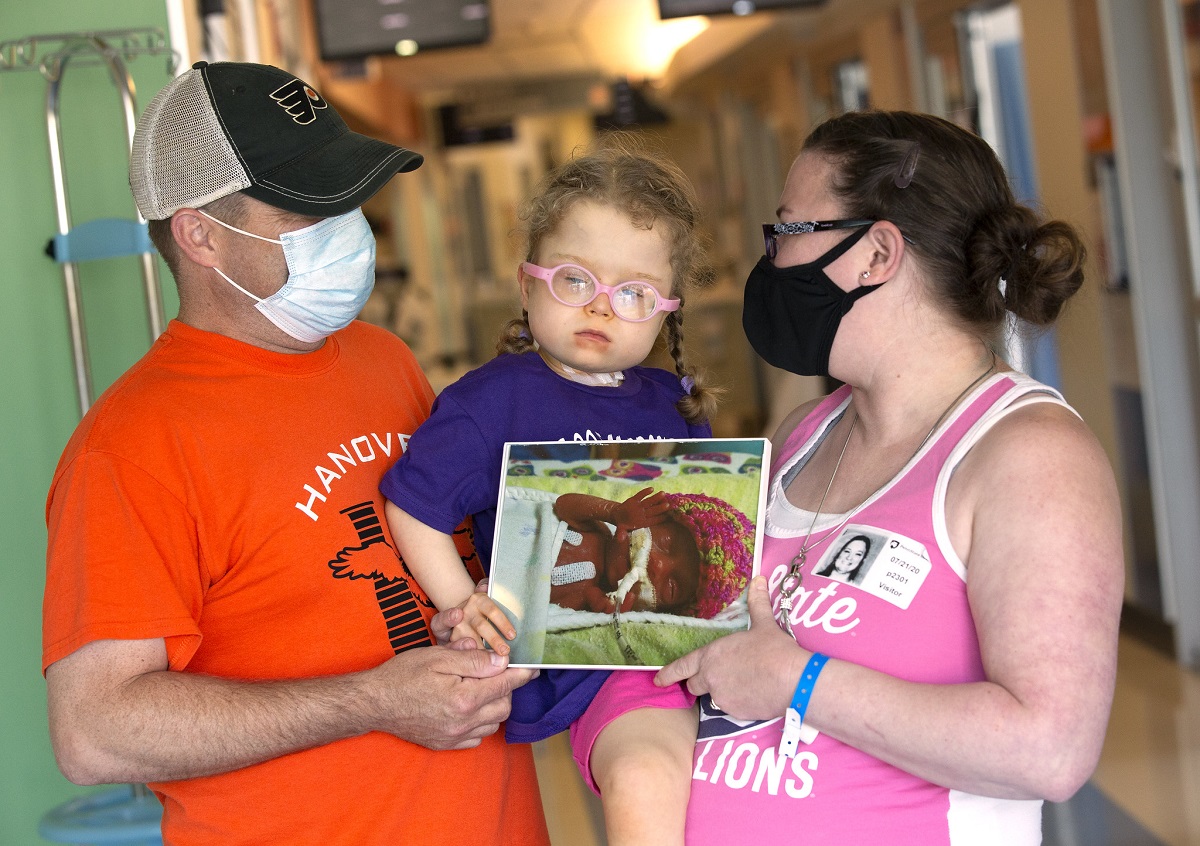 Amber Beckner, right, and her husband Jon hold their daughter, Mya, hours after the girl from Hanover had her tracheostomy tube removed at Penn State Health Children's Hospital. They’re also holding a photo of Mya taken soon after she was born 14 weeks premature.

She takes a quick survey of the hallway through her pink, owl-eye spectacles. Mighty Mya, or Mya Pearl Beckner as it says on her birth certificate, doesn’t need long to decide which way to go, because the Children’s Hospital is an old playground by now. Much of her nearly five years on the planet were spent right here, waiting, sleeping, playing and stunning nearly everyone with her ferocious will to survive. 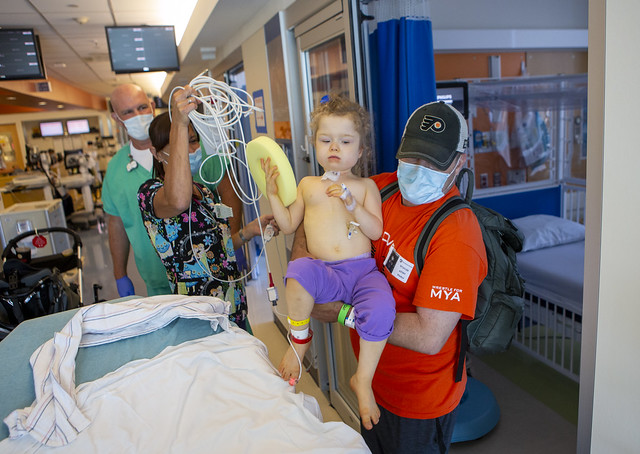 But today is special. This trip down the hall is the maiden voyage of a new Mighty Mya. Six hours ago, doctors removed the tube that has been helping her breathe since she was months old. And that means — everyone is hoping and praying — it’s one of her last visits.

Mighty Mya turns right and gallops toward the playroom, of course.

Her father, Jon Beckner, follows. She arrives at the door and pushes at it. It won’t open.

“Aw, that’s the playroom,” he says through his surgical mask. “You remember the playroom.”

A sign on the door says it’s closed because of COVID-19 — the same pandemic that postponed her procedure from when it was earlier scheduled in March. Mya veers off and begins to spin in place with her head lowered, as though she could bend forward slightly and turn herself into a top.

Jon laughs. He wears an orange T-shirt he got from a fundraiser friends held not long after Mya was born in October 2015, 14 weeks premature. She weighed 12.7 ounces, which is a little more than a can of soup. Doctors said she had less than a 1% chance of survival. Then came dozens of procedures, open heart surgery, infections, teams of therapists, doctors, bags of equipment, long drives and sleepless nights.

The back of Jon’s T-shirt says, “MOST BATTLES ARE WON BEFORE THEY ARE FOUGHT.”

Mighty Mya’s battle began in the womb. When the family came in for a 20-week checkup, doctors diagnosed her with severe intrauterine growth restriction. That meant Mya was smaller than she was supposed to be, even at a stage of development where they say you’re supposed to be the size of an artichoke. It meant she’d be at higher risk for serious complications.

“She wasn’t getting what she needed from me,” said her mother, Amber. “It was like my body was fighting her instead of nourishing her.”

She spent a week at a hospital in York, and then doctors performed an emergency C-section. To be considered a viable, healthy infant, Mya needed to weigh at least 500 grams. But the tiny, purple form surrounded by worried doctors and piles of equipment checked into this world at 360 grams.

Now, nearly five years of surgeries and procedures later, Mighty Mya is fighting her parents in a Children’s Hospital hallway over a mask. Amber is attempting to coax her daughter to don the surgical mask the hospital needs her to wear in the halls to stop the spread of COVID-19.

Amber affixes the mask over her daughter’s mouth and nose. Up goes Mya’s hand, and with a flourish down goes the mask. Jon gives it a go. Down goes the mask, again. Mya darts away. Clutching her Winnie-the-Pooh doll, she lowers her head and spins again, grunting softly.

Mya doesn’t speak yet. Many patients who undergo tracheostomies at such an early age never do. But Mya started making humming sounds. Now she makes open-mouth grunts.

The trach is one of dozens of battles Mya has faced and overcome. On Dec. 6, 2016, a helicopter flew her from York to Penn State Health Milton S. Hershey Medical Center, where doctors worked to close holes in her heart and fix problems with her eyes. 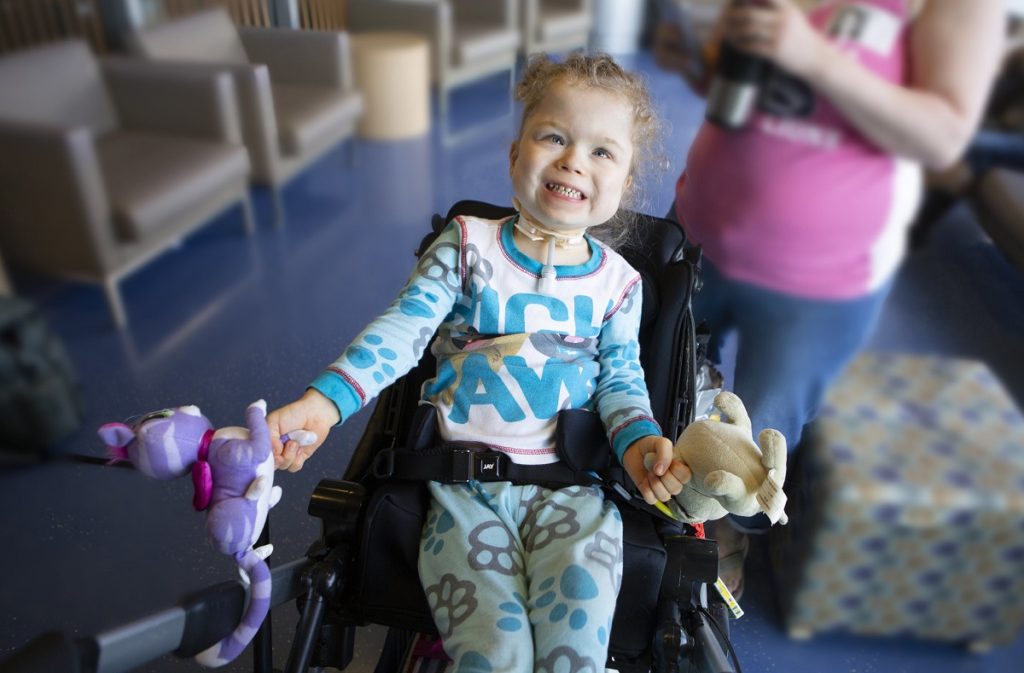 Mya gets excited after her father, Jon, hands her two stuffed animals just before the procedure to remove her tracheostomy tube.

When she turned five months old, doctors performed the tracheostomy when they determined her lungs couldn’t keep up with a recent growth spurt. Afterward, Children’s Hospital workers taught Jon and Amber to keep her equipment clean and how to change it.

A plastic strap around her neck held in place a tube that ran directly into Mya’s lungs. It became something of a leash on the Beckners’ life, a constant source of worry. Precautions had to be taken for baths. Traveling was difficult since a trained adult always had to be in the back seat with Mya in case she stopped breathing. Going anywhere meant carrying a feeding tube, suction machine, ventilator, plug, extra batteries and constant worry. “We became the bag family,” Amber said.

And the scariest part was that the worries weren’t unfounded. Over the next four years, they visited the hospital at least 18 more times.

Through it all Mya endured. She grew bigger and stronger. It’s why they call her Mighty Mya.

Then, in September, the Beckners learned the trach could be removed. When the pandemic put the whole world on hold — including the day of Mighty Mya’s maiden voyage — the family counted the seconds.

They waited until July 21. One-thousand-six-hundred-four days after it had been installed, the trach came out.

Now what? As she lopes and gallops through the hallway, Mya seems oblivious to how momentous her maiden voyage is. For Jon and Amber, the possibilities rise like untraveled vistas.

Could they go back to the Outer Banks? They hadn’t been there since before she’d been born. All that sand and water, so many dangers. Jon sometimes took her into water up to her knees, but if anything got into that tube, it could go straight to her lungs.

Time alone as a family? Mya had a team of professionals, therapists and teachers who seemed to visit around the clock. The family had been thankful, but it seemed someone was always there.

Swimming pools. Visiting family and friends without fear. Growing up.

Children’s Miracle Network (CMN) Hershey, an organization that raises funds for Penn State Health Children’s Hospital, has helped Mya throughout her journey. CMN provided everything from the ambulance and isolette that transported Mya to equipment in the intensive care units, meal vouchers and play therapy through the Child Life program. To give Mya and kids like her the #GiftofGrowingUp, donate during the Children’s Miracle Network Telethon on August 31 – September 3 on WGAL8. Learn more at CMNHershey.org/Telethon20.