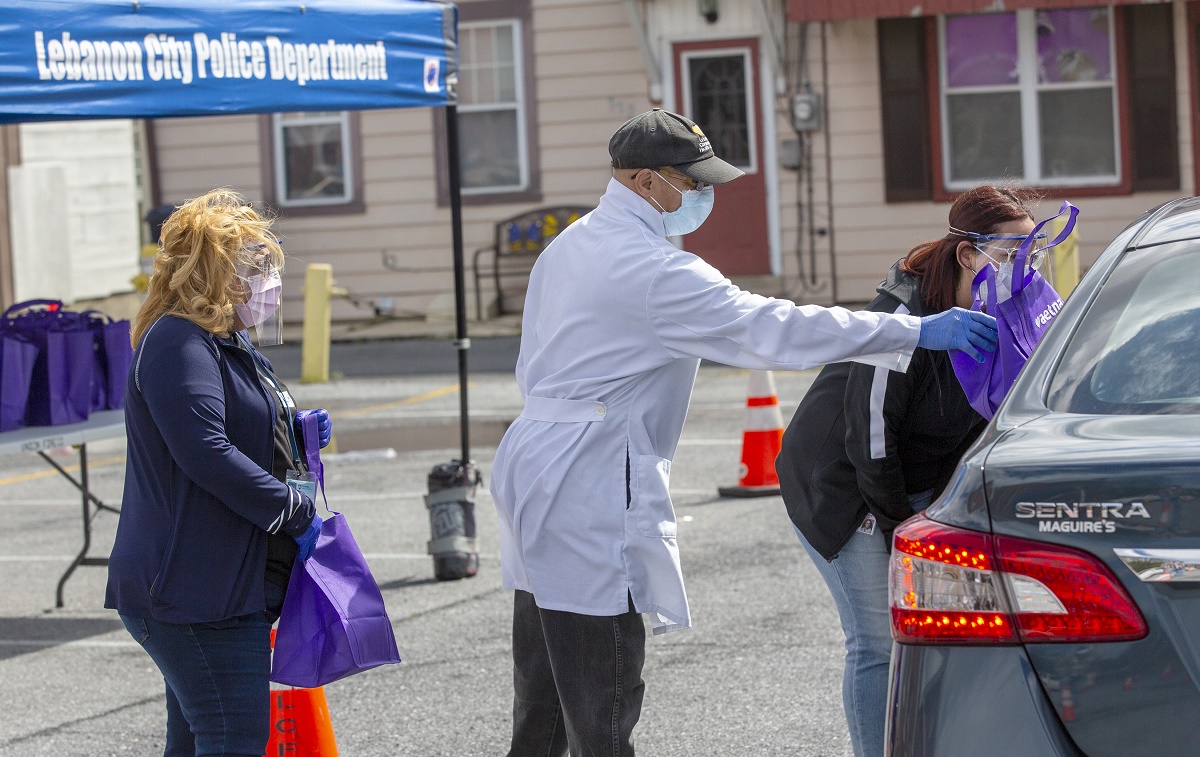 Penn State REACH program workers hand out free face masks and hand sanitizer to Hispanic residents in Lebanon during an event in May.

William Calo remembers the feeling of leaving his home in Puerto Rico and moving to the mainland. He recalls the language issues he faced, the sense of finding himself separated from his culture and the isolation that caused.

Years later, Calo, an assistant professor of public health sciences at Penn State College of Medicine, is involved with studies to help other Hispanic people who are struggling not only with language and cultural challenges but also health issues.

Dr. Jonathan Nunez, an infectious disease specialist at Penn State Health Milton S. Hershey Medical Center, grew up in Hartford, Conn. where his family ran a small store. He recalls that there were no role models in his community when he was growing up to show him that he could become a doctor. He credits that inspiration to opportunities he had at the University of Connecticut Health Center.

Nunez benefited from pipeline programs allowing him to identify role models in medicine who mentored him. Penn State College of Medicine has similar programs. As part of his work, he also wants to help improve health care outcomes for Hispanics.

Numbers increasing along with health challenges

Nearly 19% of the U.S. population is made up by Hispanics, a population of more than 60 million. By 2050, that number is expected to grow to 111 million, or 30% of the population.  Pennsylvania is home to nearly 1 million Hispanics.

As the nation marks National Hispanic Heritage Month Sept. 15 through Oct. 15, Americans are celebrating the culture and contributions of the Latino community. At the same time, however, Hispanics are facing a disproportionate number of coronavirus cases in their communities.

Hispanics between the ages of 40 and 59 have been infected by the coronavirus at five times the rate of white people in the same age group, according to the Centers for Disease Control and Prevention (CDC). Looking at deaths, a quarter of the Hispanics who died were younger than 60. Of white people, only 6% were in that age group.

Nunez said getting proper health care can be a challenge. Some Hispanics are reluctant to use a translator when talking to a health care professional, and if they have limited English language skills, this can lead to misunderstandings. They see doctors as authority figures, he said, and may not ask important questions.

“It’s important to understand there can be barriers to getting proper care,” said Nunez, who explains that Hispanics are at a higher risk for diabetes and obesity and are less likely to seek treatment for mental health issues.

Breaking down the barriers

Among Nunez’s recommendations is finding better strategies for community care.

Calo could not agree more. He says that one of the ways Penn State Health and the College of Medicine are helping to create better health care outcomes for Hispanics is by fostering partnerships in communities.

He is working on a project through a CDC grant with a goal of decreasing diabetes in the Hispanic populations of Reading and Lebanon, along with increasing physical activity and improving nutrition. The five-year project promotes chronic disease prevention initiatives through multiple partnerships with community and health care organizations. It is now being expanded to support flu vaccination and COVID-19 prevention efforts for the Hispanic community.

It is all about removing the barriers, both Calo and Nunez say. Calo said his group discovered that none of the breastfeeding consultants in Lebanon spoke Spanish, but now the project supports a full-time staff to help mothers. They also are providing Spanish translations of information about chronic disease prevention and COVID-19.

Both Calo and Nunez talk about the need for more Hispanic health care providers, but they also emphasize that it is just as important to make certain all health care workers have cultural training. Calo said he is seeing that play out with his work in Lebanon. He is encouraged by the willingness of community leaders to learn about their Hispanic neighbors.

“We have a long way to go,” he said. “We all need to understand each other. But we all can bring good things to the table and make a difference.”

Visit Penn State REACH to learn more about these initiatives in Lebanon and Reading.