Wishing her well: On her last day, colleagues wish speedy recovery to nurse diagnosed with cancer 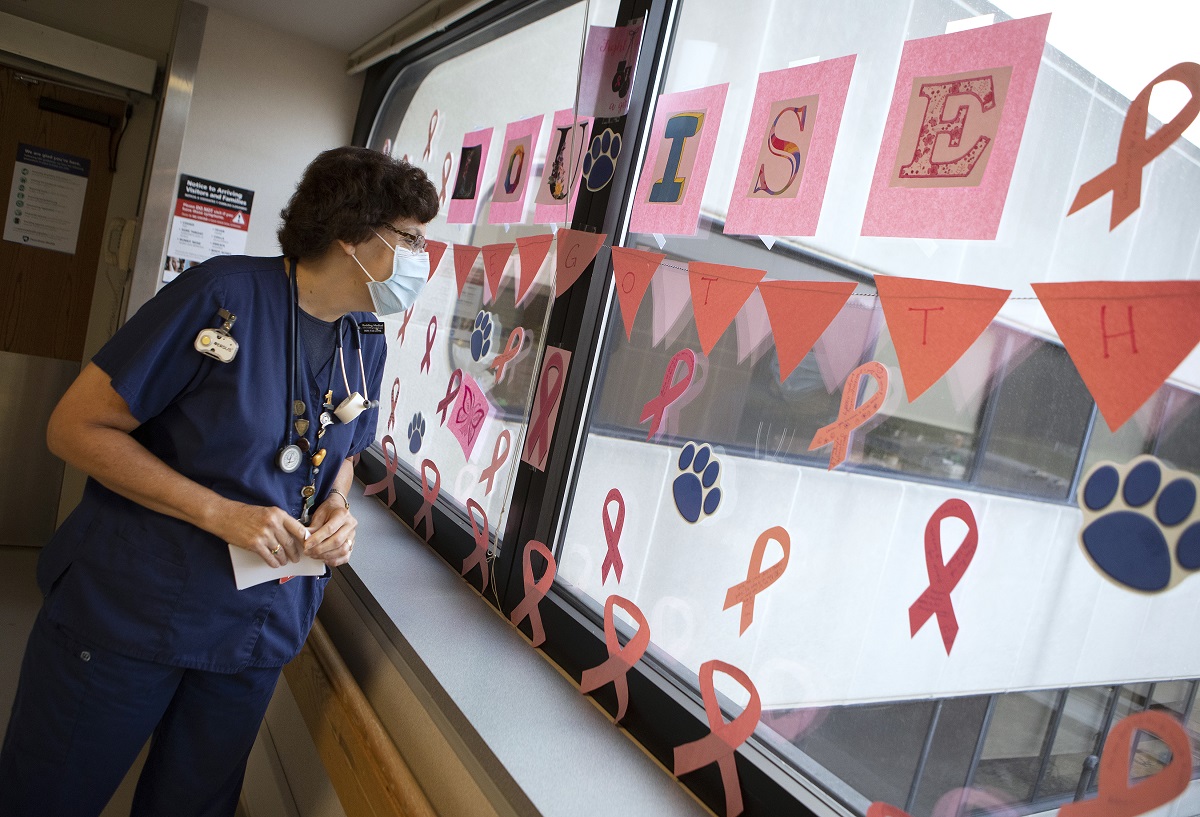 Registered Nurse Louise Kline looks over the decorations her teammates created as a show of support on her last day before she begins chemotherapy treatment for cancer.

When Louise Kline stepped onto the 7th floor at Penn State Health Milton S. Hershey Medical Center and saw her name spelled out in big construction paper letters, it happened.

The longtime nurse, who’d spent decades working, striving and hoping for others, changed sides. Today, Kline was the object of all the wishes and prayers.

As she made her way around the corner toward the double doors to the Immediate Care Surge unit, she saw pink ribbons taped to the windows. Her colleagues had written messages on each of them, such as “That cancer doesn’t stand a chance” and “You are loved more than you know.”

By the time the doors swung open to reveal a small collection of her co-workers grinning behind surgical masks, Kline had to fan her face to hold back the tears. She wasn’t alone. Kline’s morning-shift colleagues applauded and laughed, but some of those close to her broke easily.

In May, during a routine mammogram, doctors discovered Kline has a rare form of breast cancer. In June, surgeons successfully removed it, but Kline will undergo four rounds of chemotherapy.

And her friends. Nurse Manager Vanessa Jordan says she pairs most nurses with Kline on their first days on the job as a crash course. At first blush, the tall woman with the curly brown hair can be intimidating. All that nursing knowledge. She’s tenacious, a fighter for patients and seemingly possessed of a sixth sense. Kline somehow sees three or four steps ahead of most patients’ journeys and knows what’s coming next.

By the end of their first shift, every nurse has fallen for her. Kline is something special, Jordan said. “She’s the matriarch here.”

Kline will take her leave until February. Earlier, she’d expected to continue working part time, but it became clear her chemotherapy will be more aggressive. She never took a sick day.

Co-workers brought bagels. Kline is an Italian food fan, and Jordan made a giant batch of spaghetti for lunch. Christine Burfete, Kline’s colleague, chipped in with meatballs. Nurses often take their meals on the fly and at different times, so the plan was to leave it in a back room for everyone to sample throughout the day.

A creature of routine, Kline brought her lunch in a bag.

Kline has kept a stiff upper lip, and the prognosis has been positive. But the weight of everything sometimes affects them all.

Kline went back to the hall to read the messages more closely, pausing when her breath pushed back from her mask to fog her eyeglasses.

Her job began years ago when Trauma was located on the third floor of the hospital. She’s worked all over Hershey Medical Center and has seen patients of all kinds.

That’s going to be me, she thought. I hope I’m giving you the best care because I’ll want the same.

Kline tells her patients to take their recovery one small step at a time. But for a nurse who knows every angle, the switch from caregiver to cared for can be daunting.