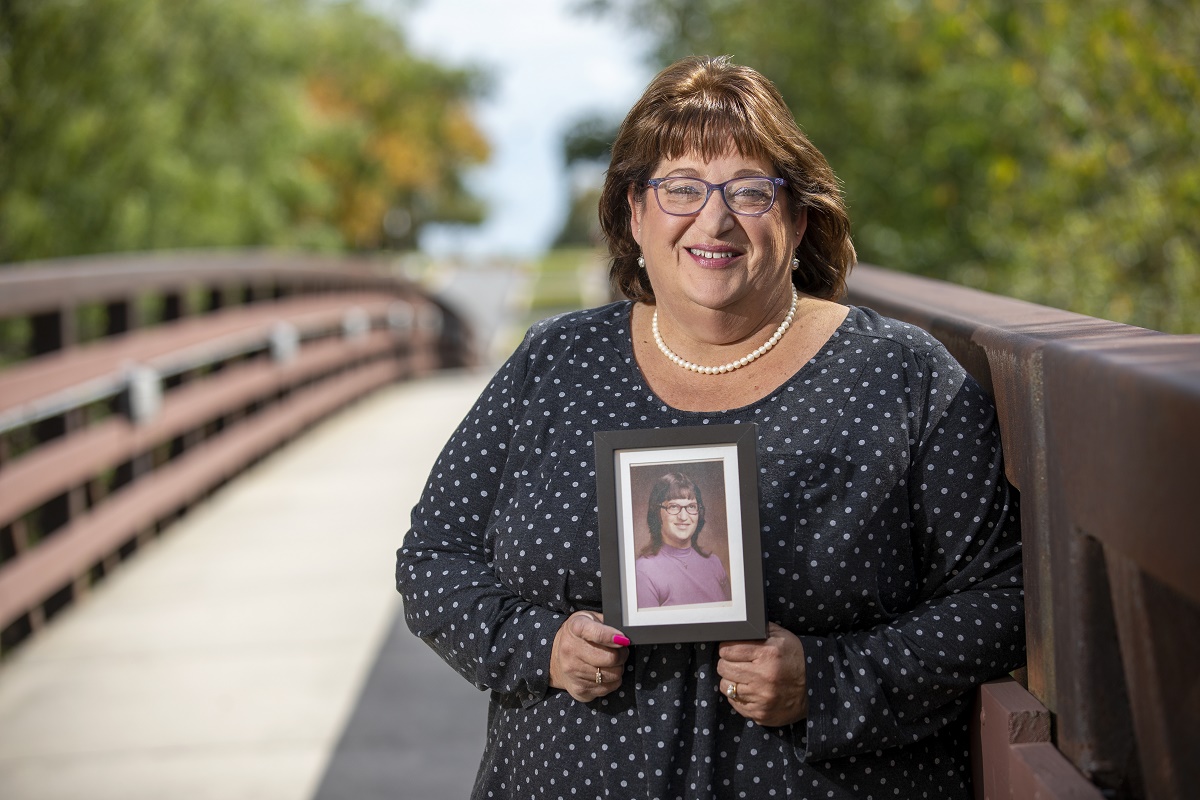 Carolyn Powell holds a photo of herself taken in her early days at Hershey Medical Center.

Hershey Medical Center is celebrating its 50th anniversary this month. We mark the milestone with the second in a series of four profiles of employees who share what makes the medical center special to them.

If Penn State Health had a team of cheerleaders, Carolyn Powell imagines she would be a shoo-in.

“I’ve never had a reason to think of working anywhere else,” declares Powell, who has worked at Penn State Health Milton S. Hershey Medical Center for 45 years, currently as a Human Resources project coordinator. “I’ve never had a day where I got up and didn’t want to go work. I tell everyone I know they should try to work here.”

Although she had held down several posts throughout her tenure – including Environmental Health Services worker, patient aide and clerical staff – she thinks she may have missed her calling. “I really should work in recruitment,” she says with a laugh.

The Hummelstown native remembers when the health campus, celebrating its 50th anniversary this year, was a cornfield, and the locals were skeptical of a new teaching hospital rumored to replace the small Hershey Hospital.

“I remember when Hershey Medical Center first opened, there was a lot of talk around town about not going there because only interns and medical students would be working on you,” she said, chuckling.

After graduating from high school in 1974, Powell heard that Medical Center employees could get money toward college, so she decided to apply and got hired to clean the clinic area, second shift.

“There were only four to five hallways across from what is now Hospital Administration, probably only about 25 exam rooms and one waiting room for all the clinics,” she said. “When I came on board, there were four employees in Human Resources. Now it’s more than 100 of us and a call center to handle everything that’s needed.”

Although the college degree she initially pursued didn’t materialize, Powell saw opportunity for growth and advancement in her career.

“I’ve loved all my jobs here – the only reason I ever left one was to better myself,” she said, noting she’s earned four promotions within Human Resources since she took a job in that department in 2005.

The line between home and work blurs happily for Powell.

In every department where she’s worked, her co-workers have become part of her family, she said. They hold fall baking contests over lunch and plan department events over dinner.

“In 2011, when a tropical storm hit here, I had six feet of water in my house,” she recalled. “Three days later, my HR family provided me with a substantial amount of money, and then the Medical Center gave a $1,500 check to any employee affected. Where else do you see that?”

Working from home due to COVID-19 has posed a challenge for Powell – not because she hasn’t adjusted to operating from her kitchen table, but because she misses her work family.

With some misgivings, Powell intends to retire in the next year and a half to spend more time with her four siblings, who live within a 10-mile radius. She and her sisters are planning their 14th vacation together.

“Hershey Medical Center has been my second home,” she said. “Part of me would love to be able to say I’ve put in 50 years, but I have a lot to look forward to in retirement.”

When she reflects on her career, Powell says it’s with a sense of pride and gratitude.

“Watching this place grow, it’s been incredible to be part of something like this,” she said. “Regardless of your position, it does take every single person to meet the goal of providing the best patient care for our community and beyond. The people are what make it so special.”

Behind the Scenes on the Front Lines: Environmental Health Services