Practicing in the ‘Golden Age of Medicine’: Dr. Cheston Berlin looks back at 50 years at Hershey Medical Center 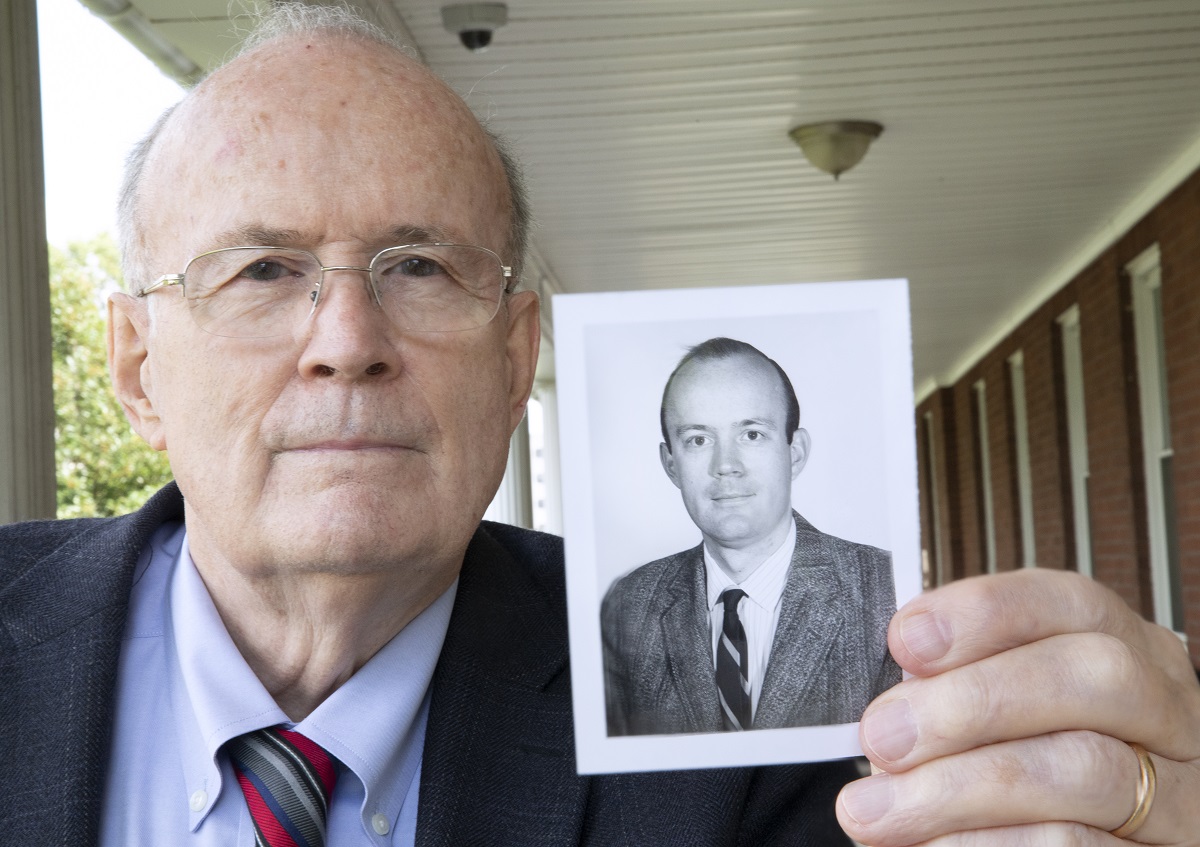 Dr. Cheston Berlin holds a photo of himself from 1971, when he arrived at Hershey Medical Center.

Hershey Medical Center is celebrating its 50th anniversary this month. We mark the milestone with the first in a series of four profiles of employees who share what makes the medical center special to them.

Before he came to Penn State Health Milton S. Hershey Medical Center in 1971, Pittsburgh native Dr. Cheston “Chet” Berlin had never been to Hershey, but now he can’t imagine having lived out his career or raising a family anywhere else.

“I felt this was a new medical school with an exciting atmosphere where the exploration for ideas was encouraged and supported,” said Berlin, pediatrician and professor of pediatrics and pharmacology at Penn State College of Medicine. “I had always worked in a children’s hospital that was both physically and administratively separate from the university. I thought it would be exciting to be in a medical center with everything under one roof – and it really was in those days.”

Berlin talks about those early days with pride and a hint of wonder in his voice as he recounts all the additions and successes he’s seen and fostered.

“We rapidly expanded our pediatric clinic, and we were well thought of in the community and started getting referrals from as far west as the Appalachian Mountains to the suburbs of Philadelphia,” he said. “We were very, very excited. There was a great esprit de corps.”

In the early days, Berlin recalls, Milton S. Hershey Medical Center and College of Medicine together had fewer than 100 staff members, and they all knew each other and gathered at the dean’s home for a Christmas party — where they all fit quite well.

A pioneering spirit infused Hershey Medical Center as it began to gain appreciation locally and beyond, and as the National Institutes of Health began issuing research grants to academic medical centers in the federal government’s first major foray into the realm of scientific research.

“I feel extremely fortunate and blessed to have spent the greatest portion of my career in the Golden Age of American Medicine, which will never come again,” said Berlin, whose research resulted in the Medical Center being recognized as a national resource for clinical research on the excretion of drugs into human milk.

The seventh floor of the Medical Center was originally dedicated to pediatric care with a small newborn nursery on the third floor. Before the first Children’s Hospital expansion in 2009, Berlin recalls the peds floor had maxed out on room.

“In the spectrum of pediatrics, inpatient was changing. Routine illnesses no longer required hospitalization, and the acuity of the hospitalized patient was rising,” he said. “The advances in care are unbelievable. Today we’re treating some conditions we didn’t even know existed back then.”

Some of Berlin’s most noteworthy undertakings came from his willingness to listen to mothers’ concerns and act on them.

One such mother came in 1972 for help managing her 12-year-old son, who was shouting obscenities in the local grocery store. Berlin remembered seeing similar behavior as a pediatric resident in a child who had Tourette syndrome. Pursuing his clinical interest in tic disorders, the Medical Center became a referral center for such disorders, eventually providing care to more than 1,000 patients.

One day in 1983, a mother from Highspire asked Berlin why she had to take her daughter all the way to Philadelphia to receive her checkups for phenylketonuria (PKU), a rare, inherited disorder that causes an amino acid called phenylalanine to build up in the body in dangerously high levels.

Why indeed, thought Berlin, who had studied various metabolic disorders. With that, he helped establish what is now one of the largest PKU clinics in the country, currently managing 240 patients.

“The PKU Clinic is another example of the ability of people at Hershey, with such a supportive atmosphere, to start from scratch and build a national reputation,” Berlin said.

His voice swells with the pride of a new dad when he notes, “You know, 12% of all graduates from the College of Medicine have gone into pediatrics, and they have done so well.” He still keeps in touch with many of them, even one who graduated 43 years ago.

As assistant dean of student affairs, Berlin read some 4,000 names of graduating students, and the thrill of being the first to address each one as “doctor” never got old, he said. He continues to lead the procession of graduates at each commencement.

“I tell everybody, this is a very special place,” said Berlin, who stopped seeing patients two years ago at age 82 but is still active on committees, advising colleagues, writing and working with the Alumni Office. “And it will always be a very special place.”

History of Medicine lecture will examine race, gender and region in the 1910 Flexner Report