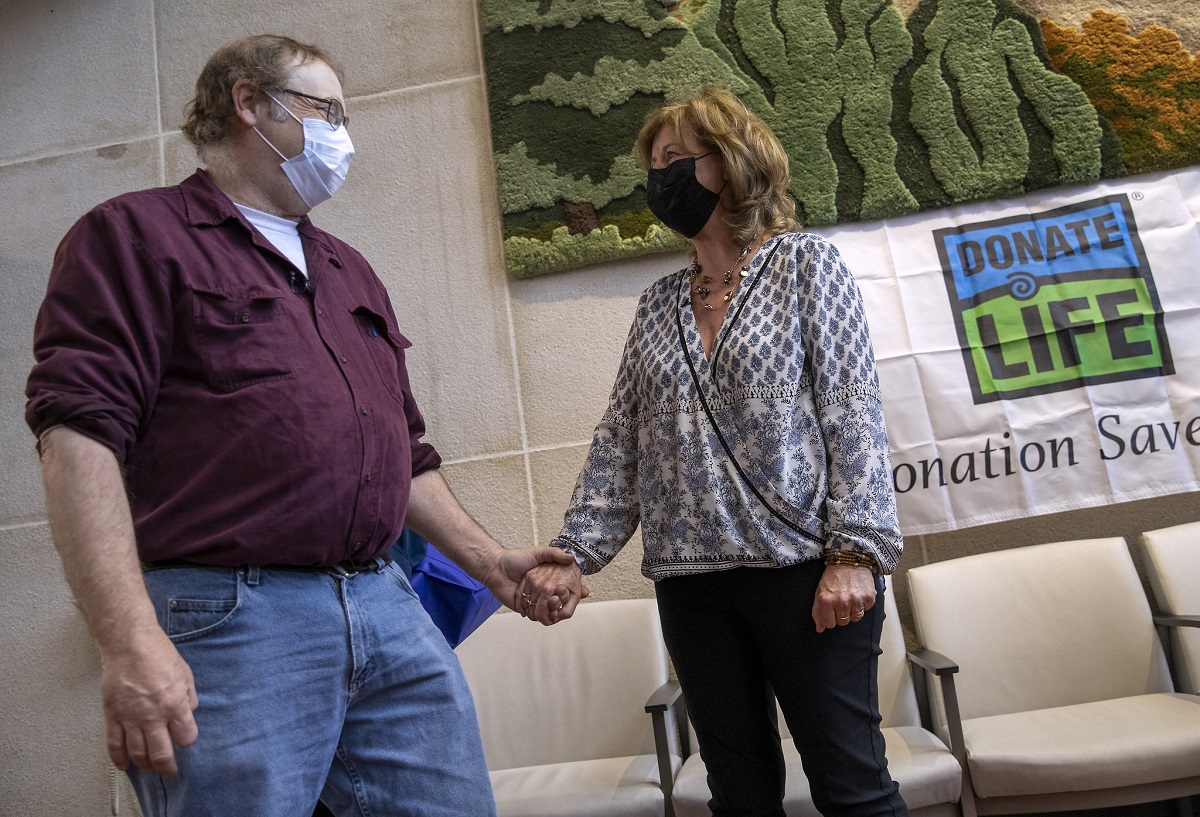 Dwayne Heller and Maureen Stathes clasp hands after meeting for the first time.

It was an introduction that needed no introduction when kidney transplant recipient Dwayne Weller met his donor, Maureen Stathes. After all, part of her has been helping him function for almost a year.

“You look good,” Stathes told the Wellsville man after the pair embraced. She drew back to get a good look at the man whose life she dramatically changed, if not saved.

Weller presented his donor – a stranger before his surgery at Penn State Health Milton S. Hershey Medical Center – with an angel dangling from a silver necklace.

A call to action

The perfect match swung into motion in December 2020, when Stathes saw a TV news story about organ donation and learned some 100,000 people are waiting for a life-saving transplant.

“I had never thought about being a donor, but when I saw that number, I thought, ‘Well, I could do that,’” said Stathes, an avid trail runner, backpacker and bicyclist who lives in Bellfonte.

She called the number given on the screen and began the process of seeing whether she was a viable donor. She thought her age – 59 – might preclude her, but she learned in March 2021 that she passed with flying colors. Next, she had to choose a donation site.

Being well-versed in anything Penn State since she works in finance at Penn State College of Agricultural Sciences, she chose the Milton S. Hershey Medical Center. “I knew Penn State Health meant a good place with a good reputation,” she said.

Then it was time to tell her husband, Gus. “He knew my mind was made up, and he was supportive through it all,” she said.

Point at the photo below to reveal slideshow player controls. 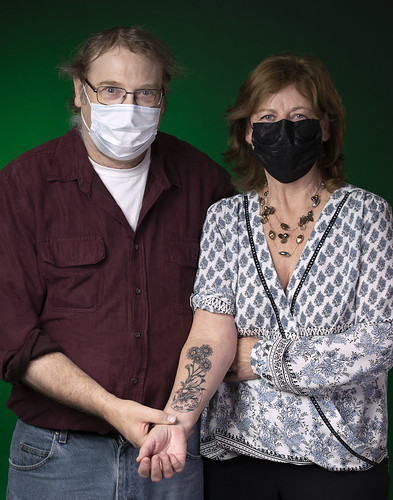 A call that changed everything

Weller was at work at his job in Mechanicsburg, where he is a plumbing, heating and air conditioning technician, when the call came that he had a match.

“I was in shock,” said the 52- year-old, who expected to wait five years or longer for a new kidney.

Weller was diagnosed with kidney disease in 1993 and had been on peritoneal dialysis every night at home since December 2019. Recently, it hadn’t been working as well, and he was anticipating having to go to a dialysis center several days a week – a move that would have changed his routine significantly, including his ability to hold down his job.

His first call was to his wife of 29 years, Erica.

“He called, almost in tears,” Erica Weller said. “I started crying myself. I was so excited for him. I knew he doubted if he would actually get a kidney, but I always told him I thought he would.”

Dwayne Weller still shakes his head in disbelief that a stranger would put herself out so much, just for him.

“I don’t know if I would have the nerve to go through with what she did,” he said. “It takes someone special to do that.”

Stathes waves off any talk about being a hero. “It just hit a heartstring, and I knew I could do it,” she said.

A member of a quilting club called “Prayers to Squares,” she brought a quilt made by club members for Weller to have on the day of their surgeries, May 4, 2021. “We tie strings on the quilt, and each one represents a prayer,” she said. “Lots of prayers were said for me and for him.”

Surgery and recovery went smoothly, both said. Three months later, Stathes was back in motion in a 14-mile trail race.

A call for more to answer

Stathes encourages others to think about donating an organ, saying it’s much easier than one may think, and all the donor’s costs are covered.

That aside, she said, it’s impossible to put a price on the gift of life.

“I told Dwayne he has some Irish in him now,” said Stathes, who was born in Ireland and came to the U.S. at age 24.

“I have more energy than I’ve had in years. Life is great,” said Weller, who is looking forward to spending more time with his son in Maryland and going to sprint car races with his daughter without worrying about getting home to do dialysis.

The largest transplant team in central Pennsylvania, Hershey Medical Center offers a comprehensive transplant program, including kidney, liver, heart and abdomen. Register to be tested to be a donor here.