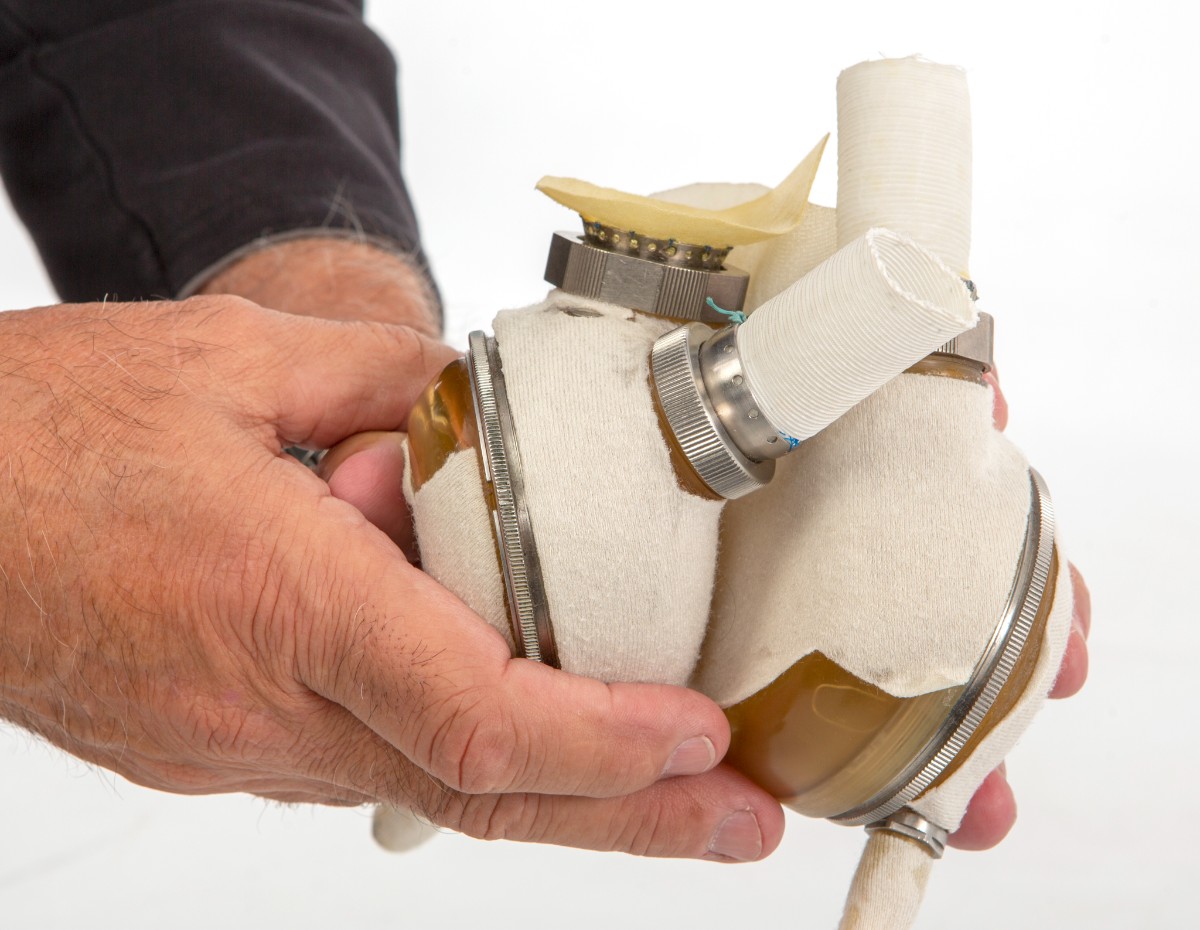 Gerson Rosenberg holds in his hands the Penn State Heart, a total artificial heart that was first implanted in a patient at Penn State Health Milton S. Hershey Medical Center in 1985. It was used as a bridge to transplant in patients with heart failure and set the stage for continued development of total artificial hearts as a destination therapy.

Development of an implantable artificial heart that operates wirelessly and reliably for 10 years is the goal of a new Penn State College of Medicine project that received more than $3 million from the National Heart, Lung and Blood Institute, part of the National Institutes of Health. The device could be a potential solution to the lack of available hearts for people with heart failure who need transplants.

Millions of people in the U.S. suffer from heart failure and while some currently available devices are bridges-to-transplant — including left ventricular assist devices (LVADs) and even one total artificial heart — none are permanent solutions, or destination therapies. Gerson Rosenberg, C. McCollister Evarts, MD, Professor in Artificial Organs, and professor of surgery and biomedical engineering, said that a new generation of options are needed because the demand for donor hearts is greater than the supply.

“An estimated 10,000 people could benefit from a total artificial heart or donor heart each year, and only about 2,000 donor organs become available annually,” Rosenberg said. “Mechanical devices could be beneficial for people who are not candidates for transplant due to their age or other health conditions like high resistance to blood flow in the lungs.”

Rosenberg has been working on artificial heart projects since the 1970s. He and his co-principal investigator, Joshua Cysyk, associate professor of surgery, will partner with collaborators from the Division of Applied Biomedical Engineering, whose combined expertise covers areas from electrical and mechanical engineering to surgery, to design the device. They plan to develop a completely implantable total artificial heart that operates wirelessly and reliably for 10 years. It will have both a left and right pump to function as the heart’s left and right ventricles.

One advantage to their proposed design is that it will also conform to the anatomy of smaller patients. The pump will have sensors in it to help give it a pulsatile flow, similar to that of a real, ‘beating’ heart. The sensors will also allow the device to respond to various physiologic conditions like exercise, and will adjust the output of the pumps accordingly.

After building the pump and finessing the automatic control system, the team will test the device to confirm its ability to respond to varying conditions and to make sure the materials are compatible with blood and other biological components of the body so as to avoid clotting or bleeding episodes.

“This project is a major undertaking and is years in the making, but at Penn State, we have the right experts and facilities to make it possible,” Rosenberg said. “If we’re successful, this total artificial heart could provide an alternative option to patients in need of a transplant.”

Penn State has been an international leader in the research, development and clinical use of heart pumps and artificial hearts since the 1970s when Dr. John Waldhausen, the Department of Surgery’s founding chair, invited Dr. William Pierce to join the new faculty. The division developed an air‑powered artificial heart (the Penn State Heart) that was used as a bridge to transplant in five patients starting in 1985. Since then, College of Medicine researchers have partnered with peers across the globe — including colleagues from Penn State College of Engineering — to develop total artificial hearts, LVADs and other cardiovascular devices.

Learn more about artificial heart research history at the College of Medicine.