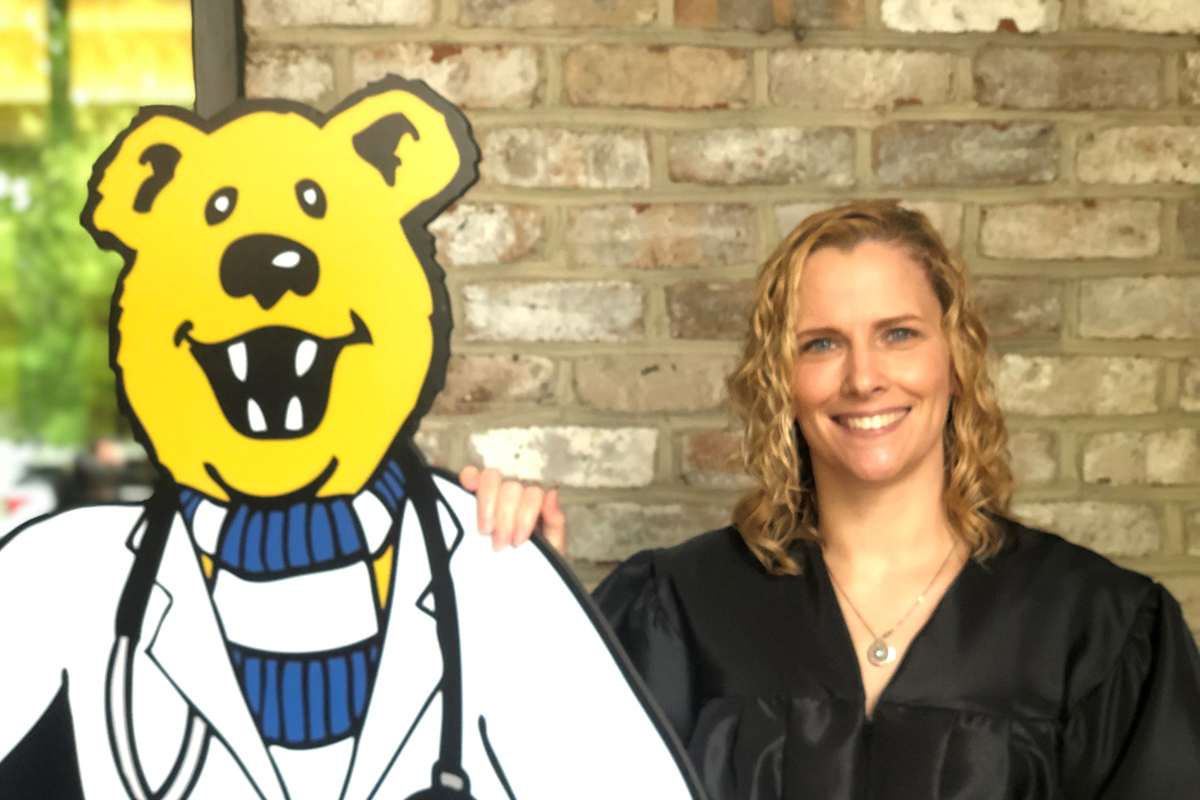 Sheena Corl celebrates her graduation from Penn State College of Medicine on May 15.

Two hundred ninety-four students gathered in person on May 15 for the Penn State College of Medicine graduation ceremony at the Hershey Lodge.

It was the first time in two years that graduates and their families were able to participate in the commencement ceremony in the same room. Students heard from Penn State Executive Vice President and Provost Nicholas Jones; College of Medicine Interim Dean Dr. Kevin Black; and keynote speaker Philp Alberti, senior director of health equity research and policy at the Association of American Medical Colleges (AAMC) and the founding director of the AAMC Center for Health Justice. Each gave the students words of encouragement and congratulated them on a momentous accomplishment that was achieved during a difficult time.

“This class persevered through uniquely difficult times that tested their resilience and ability to adapt,” said Black. “They faced the uncertainties of the pandemic and overcame its challenges through diligent empathy, outreach and collaboration efforts. We are thankful that students were able to have their families by their sides as they celebrated their achievements.”

Working in a restaurant wasn’t Sheena Corl’s dream job as a child. She wanted to help people when they needed it most – she wanted to study medicine.

But life got in the way. Corl attended culinary arts school instead and then entered restaurant management, where she stayed for 14 years. Burned out and ready for a change, Corl decided to chase her childhood dream and go back to school to study medicine.

Knowing she’d be happy in the operating room if she couldn’t get into a physician assistant program, Corl chose to study surgical technology. But balancing the pressures of working full time with a heavy study schedule was not easy.

“The constant grind got to be exhausting sometimes,” she said. But Corl counted herself lucky, as her family and co-workers, she noted, “were always there to encourage me to not give up on my dreams.”

After graduating, Corl began work as a surgical technologist at Penn State Health Milton S. Hershey Medical Center. Being able to help people through her position there sparked her ambition again to get into a physician assistant program.

So, back to school it was. Working and taking classes was intense and draining, but, Corl added, “The most rewarding thing was getting that phone call that I was accepted into the Penn State physician assistance program. It was a dream come true.”

Over the next two years, Corl worked rigorously to achieve high marks in her classes, despite the unique challenges and pressures of being a student during the pandemic, and she credits much of her success to the friendships she made in the program. Now that it’s graduation time, Corl can sit back and enjoy celebrating her accomplishments with her family.

“For my parents and loved ones, this graduation meant everything,” she said. “This is a dream I’ve been working on for 10 years.”

Meeting his mentor caused a change in course

With his knack for problem-solving and his desire to help people, Ryan Yoast found biomedical science was a natural fit.

After discovering his passion for science as an undergraduate, Yoast pinpointed Penn State College of Medicine as his choice for a doctoral program because of its collaborative nature and the open-door policy of the research faculty.

One cross-country flight from Sonoma County, Calif., later and Yoast was quickly immersed in College of Medicine life. During the first semester, it took some time to adjust to the demanding workload, but Yoast felt bolstered by the support of fellow scientists.

“I was extremely fortunate to have been a part of an incredibly talented cohort of scientists during these times,” he said. “We would routinely form study groups that allowed us to collaborate rather than compete, helping us overcome the countless challenges we would encounter in the classroom.”

At the end of that first semester, as Yoast began rotating through multiple labs, he was set on studying immunology. That is, until he met his mentor, Dr. Mohamed Trebak. Yoast quickly changed course to focus on biomedical science. He also joined the team in Dr. Trebak’s lab, an experience that Yoast described as “transformational.”

“With the support of my mentor, committee members and the many members of our lab, I was able to pursue novel ideas and ultimately publish multiple manuscripts,” he said. “During this time, I truly learned to think like a scientist.”

With his doctoral degree in biomedical science, Yoast is able to unite his drive to solve problems with his wish to improve the lives of others. He now works as a discovery scientist at Bristol Myers Squibb, where he strives to “ask the big questions that will hopefully result in the development of novel strategies to treat or cure disease.”

Seeing himself in his patients

Visiting Penn State as a high school senior, Kaleb Bogale was struck by the generations of people who took great pride in having graduated from the University. He knew then where he wanted to go to medical school.

His ties to Penn State became even stronger over the years – his brother was a graduate and his father worked as a pharmacy technician at the Milton S. Hershey Medical Center for 26 years. He was also able to witness the proficiency, collaboration and dedication of the staff at Hershey Medical Center when his mother received lifesaving care for breast cancer.

During his time at the College of Medicine, Bogale helped develop a Type 1 diabetes (T1D) & Me support group, which is part of the T1D & Me program at Hershey Medical Center. The group promotes coping strategies for children diagnosed with T1D and normalizes living with T1D by creating an inclusive environment for patients and families.

Bogale’s work with the support group was particularly meaningful, as he had attended the T1D & Me clinic himself when he was diagnosed with T1D as a child. He understood firsthand the struggles and psychosocial barriers that come with this diagnosis and the important role the support group could have in reducing the emotional burden.

“A diagnosis of Type 1 diabetes can be incredibly stressful for both the children and their parents,” he said. “So, we created a space for them both to speak openly about their experiences.”

As he celebrates his medical school graduation, Bogale reflected on what it means to him and those who have supported him along the way.

“It means so much for my family and the Ethiopian community in Lancaster County,” Bogale said. “I am the first in my family to become a physician, but I will certainly not be the last.”

Bogale is headed to NewYork-Presbyterian Hospital in New York City to begin his residency in internal medicine. He intends to continue focusing on patient advocacy, the significance of which was highlighted during the pandemic.

“The importance of responsible physician advocacy was well demonstrated throughout our nation’s COVID response,” he said. “After my experience working on our medical student-led COVID response task force, I hope we will all continue to be advocates within our communities.”