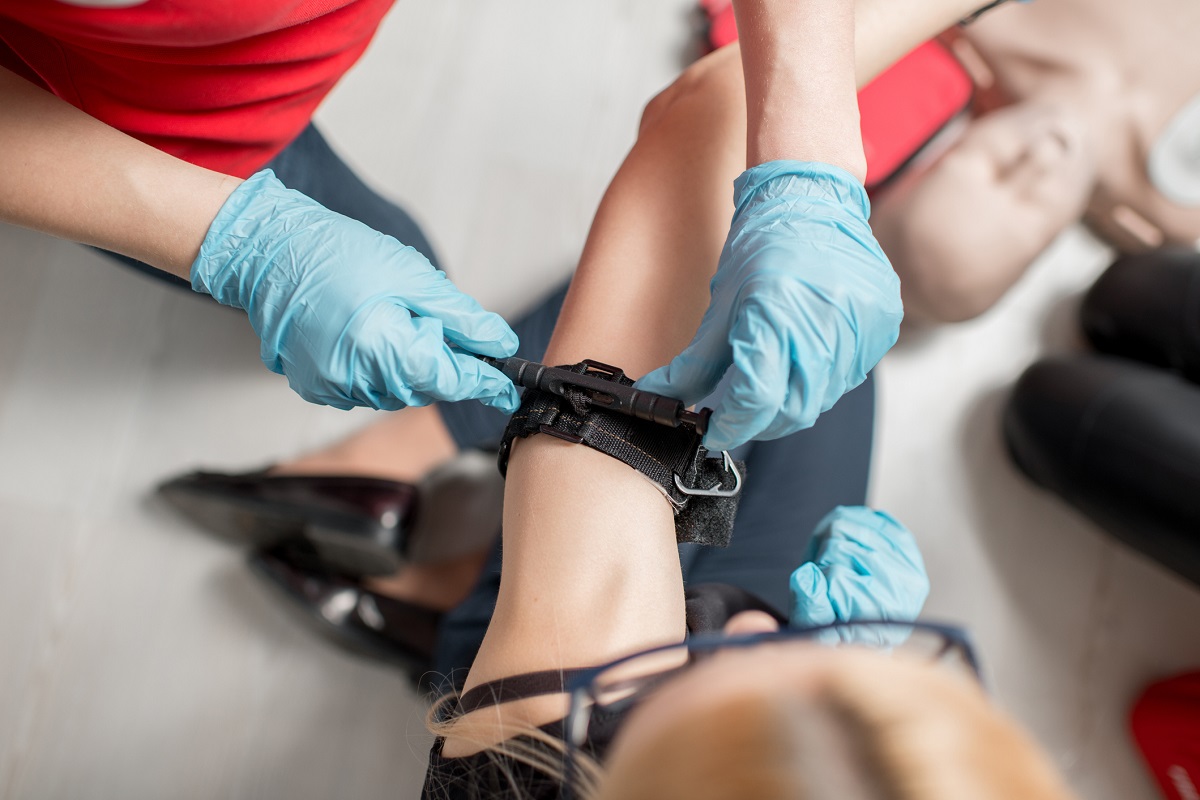 Minutes might have been enough to decide the fate of a child in Cumberland County one day in the early spring of 2021, but Sgt. Matt Roberts knew just what to do.

Moments earlier, the East Pennsboro Township police officer had been changing in the locker room when the call came in: pedestrian struck. Paramedics were on their way to South Enola Drive, just a few blocks from Roberts’ barracks. There, he found a young boy lying on the side of the road under a blanket. When he pulled it back, he saw blood pouring from a deep laceration on the child’s arm.

“I was pretty confident he would have bled out,” Roberts said.

He thought back to his training. Not the lessons about weapons or crowd or traffic control he could turn to during a typical shift as a police officer. Instead, Roberts remembered a trip he took a few years earlier with others from his department to Penn State Health Holy Spirit Medical Center.

Paramedics later told him that’s what saved the boy’s life.

Roberts is one of millions of people of all stripes ― from high school students to attorneys – who have received a special emergency training called Stop the Bleed. It takes 90 minutes and consists of a presentation and hands-on-work. And those who take it can make all the difference in the crucial minutes between when someone is hurt and when it’s too late. 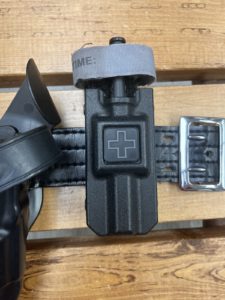 East Pennsboro Township police officers like Sgt. Matt Roberts keep tourniquets like this one on their duty belts.

“These are every day events,” said Patil, who has been teaching Stop the Bleed courses for years. “They aren’t just huge, mass casualty events. This can be someone working with a lawnmower or in a workshop. When you think about how it can happen anywhere, it just makes sense for everybody to get this training.”

That’s why health care organizations like the Milton S. Hershey Medical Center and Holy Spirit Medical Center are seeking to train as many people as possible. Sunny Goodyear, injury prevention and outreach coordinator at Holy Spirit, visits local high schools and other spots in the area to show people how to manage what most hope they’ll never encounter. She’s taught 8,000 people about Stop the Bleed since 2018.

Find out more about the program here.

First, make sure you’re not in harm’s way, Patil and Goodyear said. Have someone call 9-1-1, and then determine if it’s a life-threatening bleed. That’ll be obvious. “It’ll be something you won’t forget,” Patil said. “We’re talking about a lot of blood.”

Next, look for a trauma first aid kit. If you can’t find one, find a clean cloth and apply direct, steady pressure on the wound. Squeamish? If you know this about yourself, stick with something you can do well, Patil suggests. “Be the person who dials 9-1-1,” she said.

If you have a Stop the Bleed kit, more options become available. These trauma kits are becoming easier to find. Holy Spirit has distributed 922 bleed control kits, which contain essentials to stem blood loss in an accident, to schools, factories, shopping malls and other sites throughout five counties in central Pennsylvania. Look for them in the same places where you find an automated external defibrillator. Other Stop the Bleed aficionados keep kits in their cars.

Last year, 46 patients who’d been saved by Stop the Bleed tourniquets came into Holy Spirt Medical Center’s emergency department. As of April, this year’s tally was 22.

Arm or leg wound? Have a Stop the Bleed kit? Use a tourniquet.

When a wound appears on an extremity, tourniquets are usually the most effective tool, Patil said. If the person is bleeding from somewhere else – say the groin, neck or shoulder – pack it with hemostatic gauze from the kit and apply pressure.

When he helped the child, Roberts opted to use the tourniquet he kept in his car since the wound was on the arm. It was Roberts’ first outside of his training at Holy Spirit. Using the Stop the Bleed-sanctioned strap above the wound, Roberts tightened the pressure with a windlass to stanch the bleeding. By then, his partner, Officer Brian Ebersole, had arrived. Ebersole had served with the Marine Corps in Iraq and knew tourniquets from experience. He tightened the windlass even further than Roberts had. The bleeding stopped.

Thirty years ago, tourniquets were used as a last resort, Goodyear said, because the method worked so well, it cut off blood flow to the limb. Held in place too long, the old version of a tourniquet caused amputations.

Since then, military personnel on battlefields have perfected the practice, which allows enough blood flow to continue while still stopping the bleeding wound. A Stop the Bleed tourniquet should be in every kit.

These days, Roberts and others on the East Pennsboro Township police force keep tourniquets on their duty belts.

“We use them more often than the general public thinks,” he said.