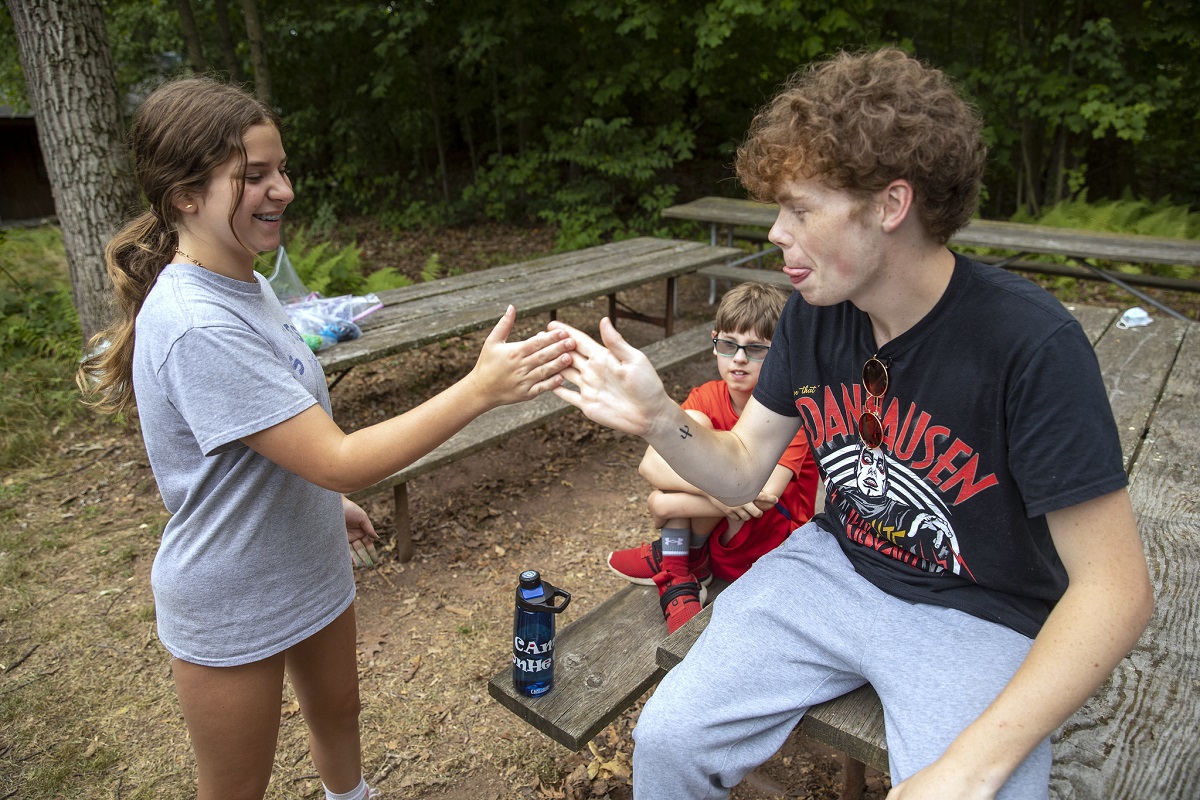 Kaeden Rhoads, 19, owes a portion of the man he’s become to a 20-foot, wooden tower rising up from a clearing in a forest at a Lebanon County summer camp.

Every year since he was 13, Rhoads has scaled it, willed on by a cheering mob of children just like him. Then, clinging to a zip line, Rhoads flies back toward earth, pulse pounding and happy.

The feat, one millions of kids perform every summer throughout the country, becomes a miracle when viewed in scale. All the campers, aged 12 to 18, and a few of the counselors are waging private wars against heart ailments that might have killed them. Instead, their conditions have turned into challenges they’re learning to live up to every day

Welcome to Camp Lionheart, Penn State Health Children’s Heart Group’s respite for kids fighting congenital heart defects. Here, for one week every year, more than a dozen learn about their conditions from experts, form bonds with fellow survivors and take a break from the bullying, the surgeries and the fear for a taste of summertime normalcy. Penn State Health treated 10 of the 16 campers for their heart defects.

Rhoads, who underwent open heart surgery at the Children’s Hospital when he was four days old, has come to Camp Lionheart since its inception six years ago. This is his first year as a counselor.

“When I first came to this camp, I had no friends. I was bullied all the time because of my heart problem,” he said. “Everybody thinks you’re different. The world used to tell me you’re not allowed to be different. This camp taught me that it’s OK.”

Rhoads cranes his neck to look up one of the tower walls and watch veteran camper and resident jock Jaxin Bush, 13, race first-year camper H Byrd, 11, up the wall. That’s his name. H. Ask him why his parents named him for eighth letter of the alphabet, and he shrugs.

Bush was born with coarctation of the aorta and bicuspid aortic valve.

“This is literally his first time doing this,” Rhoads says, pointing at H, a slight boy with tangles of dark hair poking out from under his helmet, as he tentatively inches his way up. Plastic handholds designed to look like stones on a rockface are scattered across the wooden wall. Climbers are assisted by someone on the ground, a second, who uses their body weight to keep a cord lashed around the climbers’ waists holding them aloft. Just now, H’s second is supporting almost all of him.

“I think Kaeden is the reason most people make it to the top,” someone says.

“That’s because I cheer people on,” Rhoads mutters. “That’s what you got to do.”

Rhoads has figured out ways to reach just about everybody. Bush is an athlete – no problem getting him involved in sports, but with arts and crafts you have to cajole. There’s Ethan Alves, a kid who constantly seems surrounded by laughter. He’s a fan of the band 21 Pilots ― just like Rhoads ― and the two formed a bond over it.

At his birth, doctors discovered the two main arteries leaving Alves’ heart had been reversed.

At the base of the tower, Rhoads raises his gravelly voice at H, who is pawing hesitantly at the wooden upright with a sneaker. “You got this. There’s something by your left leg you can stand on.”

H complies. He plants a foot on one of the handles and scrambles up the wall. His sneakers disappear over the top of the tower, with Jaxin close behind.

Counselor Carl Thompson, 18, is among those cheering. As a camper, he climbed the tower only once in four years. Like Rhoads, this is his first season as counselor. Thompson was born with hypoplastic left heart syndrome, a severe defect that prevented oxygenated blood from pumping through his aorta. “You take your life in your hands,” he says of the wall. “You could never get me to climb that thing.”

“That’s why you’re going to do it today,” Rhoads says. “Carl? Carl? Get over there.”

Thompson glances up at the tower. “I don’t have a helmet, bro,” he says after a moment.

“Get a helmet,” Rhoads says.

Then H descends the tower on the zip line, eyes wide, mouth agape in a noiseless scream.

As the climbers scramble up the wall, Dr. Thomas Chin, former chief of pediatric cardiology at Penn State Health Children’s Hospital, arrives to watch. The founder of the camp, Chin knows all the stories. He stays at the camp for much of the week, along with emergency medicine specialists from Life Lion EMS. Other patients and health care workers come in to teach and volunteer. Nearby, automated external defibrillators stand ready.

There’s never been a need for them to save a camper’s life, Chin says. They’ve had 119 campers so far in six years, he says.

Everyone attends free of charge. An organization called Ellie’s Heart Foundation pays for everything through gifts from organizations like Children’s Miracle Network and private donations. It’s named for Eleanor Ayers, who died of dilated cardiomyopathy in 2012 when she was a little more than eight months old. Chin told Eleanor’s mother, Jennifer, of his idea for a camp, and she made it her mission to help. Jennifer Ayers brings her family along every year.

Each year, everyone sits around campfires to share their stories. Later this day, they’ll make tie-dye T-shirts (Alves, the 21 Pilots fan with the outgoing sense of humor, will get some purple dye in his rust-colored hair, and everyone will howl), and cook food on an open fire. They’ll also speak with adult survivors of congenital heart defects and watch a demonstration of an electrocardiogram device.

Camp Lionheart members make connections hard to fathom for people without heart problems. Just around the corner from where Rhoads is coaxing Thompson up the tower, Emily Raffensberger, a 33-year-old counselor from York, is encouraging another camper up a platform to do the high-ropes course. She’s joined by Isabelle Mumma, 22, also of York. The two met for the first time earlier in the week and discovered they’d both been born with an extremely rare heart defect called truncus arteriosus.

Only 250 babies are born in the U.S. each year with the defect. Raffensberger and Mumma calculated the odds and determined the chances of meeting someone else with the exact same condition ― one in 33,000.

Both women have dark hair and aren’t very tall. To the casual observer, the similarities end there, but somehow both claim they immediately felt a bond and recognized their counterpart had truncus arteriosus before they knew it for a fact. Mumma never met any one else with the defect before. Raffensberger once held a baby who’d been diagnosed with it when she was at a hospital. Last year, Raffensberger’s first, one of the campers had truncus arteriosus.

Isabelle has been through five open-heart surgeries. The first was when she was two days old. The most recent was last year. Raffensberger has undergone three surgeries, starting at two days old. The two have been inseparable during their week at camp.

Raffensberger learned of the camp during the Children’s Heart Foundation sponsored Hershey Heart Walk. “I never had a chance do anything like this when I was a kid,” she says. “Did you?”

“Being a counselor is great because you get to be a kid again,” Raffensberger says.

“It’s so exciting meeting someone who has been through what I’ve been through,” Mumma says.

“It’s like discovering you have a twin sister you never met,” Raffensberger says.

Back at the tower, Thompson and Rhoads are helmeted and gazing at the summit.

Rhoads double takes. “We made a deal,” he says. “You go, and then I go right after you.” 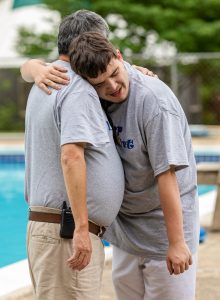 Carl Thompson thanks and embraces Dr. Thomas Chin during a memorial.

Eventually, Thompson relents and makes a sweaty, nerve-wracking climb that ends in triumph at the top of the wall.

As he flies along down the zip line, Thompson shouts the name Roman. He wears a white T-shirt with the words “In Honor of Roman” stenciled on the back in blue and pink.

Roman Astree was a camper who died last year because of ongoing heart complications. He was 18. A year earlier, another camper named Brody Manatt, 15, died, not of heart complications, but because of injuries suffered in a four-wheeler accident. That same year, Josh Geib, a counselor and former camper, died at the age of 25.

A somber reality lies at the edges of the joyful atmosphere at Camp Lionheart. While no one has ever had an emergency at the camp, every year butterflies are released and candles are lit for playmates and friends who have died during the off-season. The camp, while emphasizing fun and camaraderie, doesn’t hide from hard facts. It confronts them head-on. Being a Camp Lionheart camper means facing your own mortality at an age when you’re supposed to be thinking about video games and summer vacations.

“The first time it happened, I’d never experienced a loss before,” Rhoads says. He’d been in school when he got the news the first time a camper died. He took it hard. “I don’t know why we lose those people that we love so much. It’s not my task to question that. You just have to live life and do everything you can to make sure they didn’t die in vain.”

At the end of this day, the campers will gather at the side of the camp’s pool, where they will release candles in floating bags. Each candle represents someone lost. Geib’s mother will be there. Jaxin and H will stare into the grass. The laughter around Alves will disappear, and his face will redden and he will wipe his eyes.

Thompson will weep openly as he speaks of Roman, Brody and Josh. “Without this camp, I don’t think I would survive,” he will say to everyone before embracing Chin. “I was so down in the trenches depressed. Everyone hated me and called me names. I thought it never would get better until this place started. You honestly saved a lot of lives with this place.”

But that will come later. For now, at the tower, Thompson is facing down a fear and soaring through the sky with his friends.

Rhoads gets Thompson’s apprehension about the climb. After all, Rhoads remembers his first year, when as a pale, spindly 13-year-old with a fear of heights, he made his first climb up the wall. He didn’t want to. He definitely didn’t want to ride the zip line, he was so scared. One of the experts stationed at the top of the tower talked him into it.

He remembers the ground rushing under him as he glided along, practically weightless. 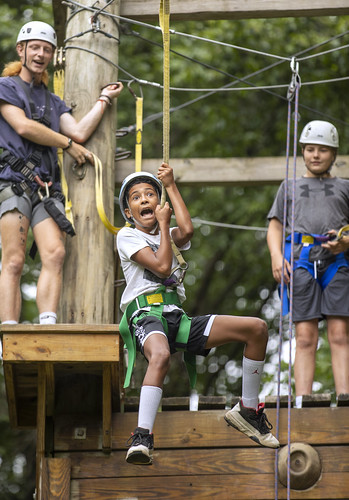 Researchers to explore treatments for acute rhinosinusitis in clinical trial