A tale of two continents: Visiting scholar returns to Hershey to share impact 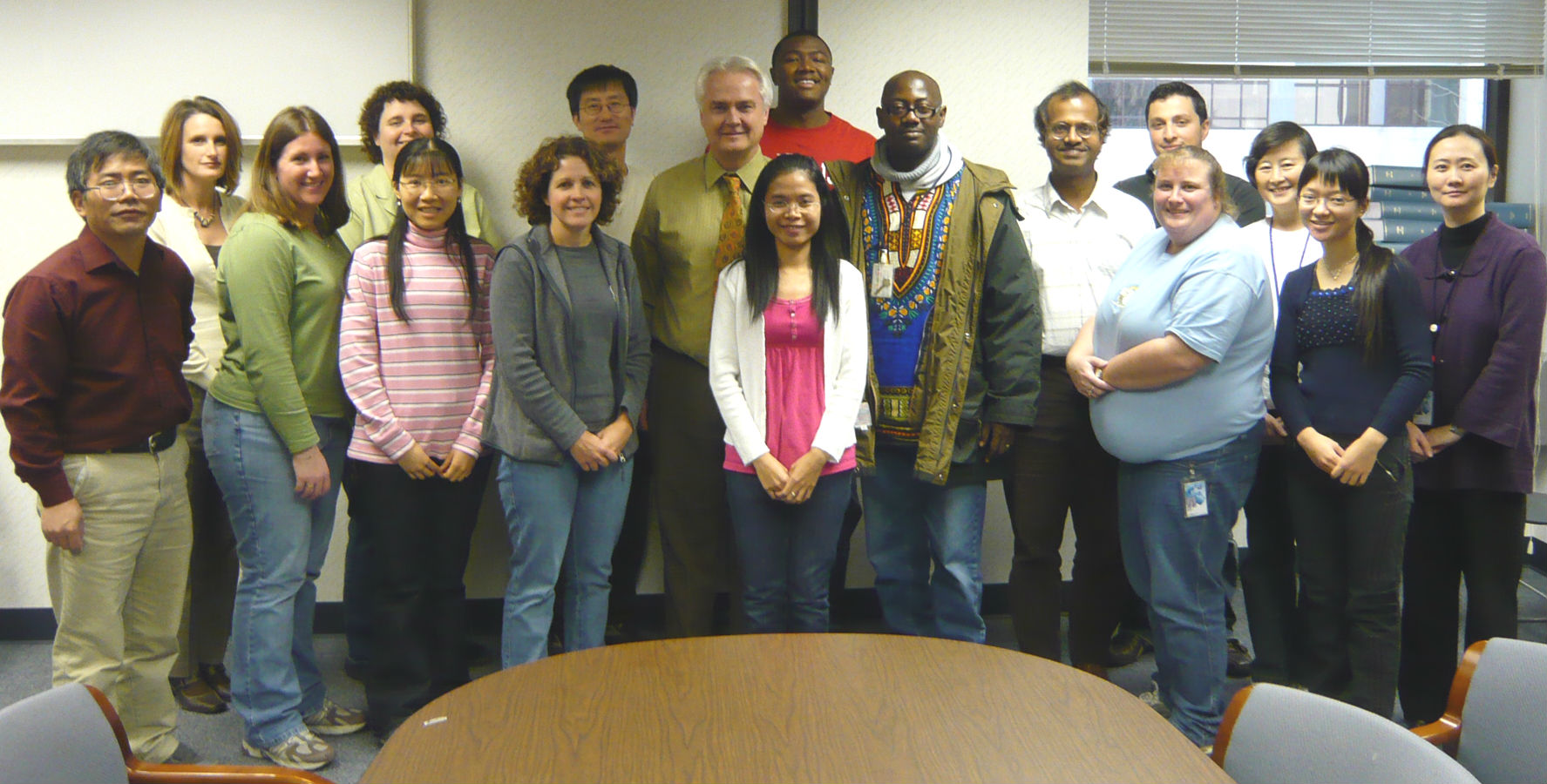 James Olopade stands with members of James Connor’s lab during a visit College of Medicine more than a decade ago.

When James Connor, distinguished professor of neuroscience and anatomy and vice chair for research in the Department of Neurosurgery at Penn State College of Medicine, met James Olopade at an International Brain Research Organization (IBRO) meeting in South Africa more than a decade ago, Connor didn’t realize that Olopade would someday come to his lab as part of an IBRO Research Fellowship. He also didn’t know the impact the fellowship would have on Olopade’s career — and on brain research and education in Africa.

Connor received a Visiting Scholar Speaker Award to Enhance Diversity in Neuroscience from the IBRO, and is using the funds to bring Olopade back to Hershey to share how his experience at the College of Medicine impacted his research and academic efforts in Africa.

Olopade, a veterinarian by training, arrived in Hershey in 2008 with an interest in studying neurotoxicity. During his time in Connor’s lab, he was able to determine that exposure to vanadium, a toxic metal in the environment in parts of Nigeria, during prenatal development can have negative consequences for brain development.

Students, faculty and staff at the College of Medicine can hear Olopade present his talk, titled “The Impact in Africa 10 Years After Being Trained at Penn State: The Story of an IBRO Research Fellow Alumnus,” at 3 p.m. Thursday, Dec. 12, in Lecture Room A.

Following his time as a visiting scholar at the College of Medicine, Olopade was published multiple times and continued his studies internationally through a series of fellowships. He is a professor of veterinary medicine at the University of Ibadan in Nigeria, his native country. From 2014 to 2018, he was head of the Department of Veterinary Anatomy and, in 2017, was elected dean of the faculty of Veterinary Medicine at the University of Ibadan. He also served as president of the Society of Neuroscientists of Africa and has been published more than 100 times.

“James is a true leader in the field of neuroscience,” said Connor. “He hopes to set up the first neuroscience institute in Africa and he has been influential in fostering research opportunities for learners in Africa.”

While in Nigeria a few years ago, Connor learned that students in Africa are responsible for funding their doctoral studies. He said that many students teach and do odd jobs while completing their education, which makes Olopade’s journey all the more impressive.

“James is a role model for aspiring scientists in his country,” Connor said. “He has helped students find funding to continue their education and mentored them in research.”

The goal of the Visiting Scholar Speaker Award is to promote awareness and increase diversity in neuroscience – something the Department of Neurosurgery continues to champion as they recruit faculty and trainees from a variety of different backgrounds.

“I am proud of our department’s efforts to create a diverse environment,” said Dr. Robert Harbaugh, chair of the Department of Neurosurgery at the College of Medicine.

According to Lynette Chappell-Williams, chief diversity officer for Penn State Health and associate dean of diversity and inclusion at the College of Medicine, diverse voices in research can help scientists gain new perspectives on topics they may not have previously considered.

“Research shows that increased diversity in an organization can drive innovation and excellence,” Chappell-Williams said. “Dr. Olopade’s experience is a prime example of how diversity can benefit the field of research and should serve as encouragement to follow the lead of our neurosurgery department in exploring ways to increase cultural diversity in our specialty areas.”

Stepping away with “many, many thanks,” Brechbill retires