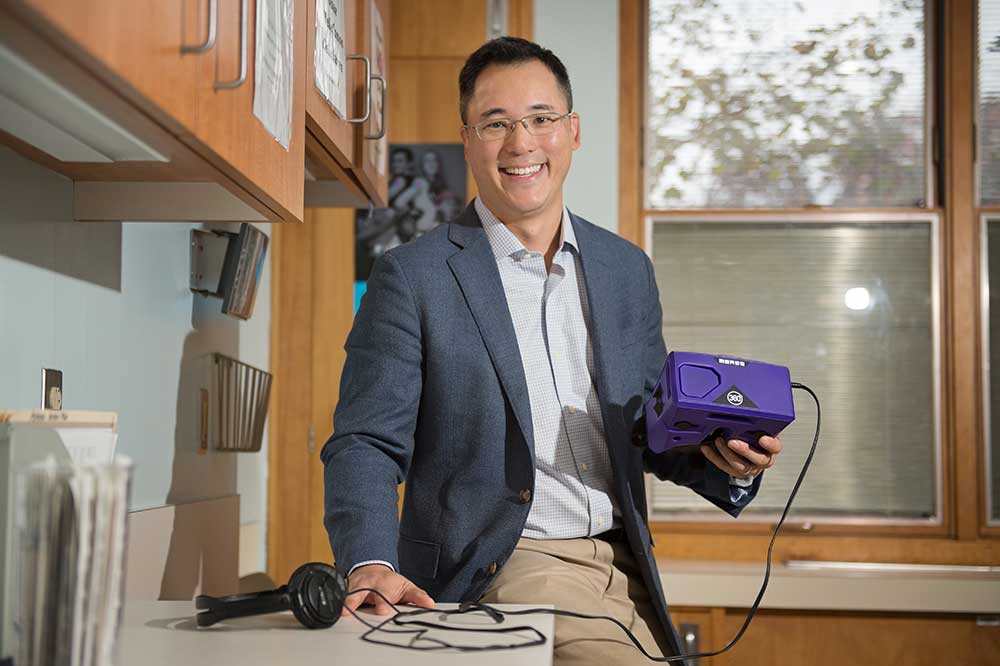 Dr. Jerry Lee shows the virtual reality goggles that he uses for some patients to distract them from medical procedures.

A patient – a 13-year-old boy – was recently in need of immunizations. Doctors also wanted to draw blood, as the boy was taking psychiatric medications that call for routine monitoring.

The problem was that the child, who had recently moved to Reading and was living with his grandmother, was suffering from the results of severe sexual and physical assault, explained Dr. Jerry Lee, a pediatrician at the Downtown Campus.

Post-traumatic stress disorder and other conditions resulting from abuse made it extremely difficult for the patient to interact with doctors or allow anyone to touch him.

“It’s really a sad situation,” Lee said. “He’d been through a lot, and even with some medication to calm him, he couldn’t tolerate these procedures.”

After doctors had twice attempted to treat the boy with no success, Lee started thinking outside of the box.

Even for patients without the types of problems from which the boy was suffering, procedures like getting shots or having blood drawn can be upsetting, Lee explained. That’s because patients tend to become hyper-aware of their surroundings and what is occurring, which can cause some distress.

That distress was greatly multiplied in the case of the young patient with the history of abuse.

“I started thinking that we might have success if we could use some sort of sensory distraction with this patient,” said Lee. “I wanted to find a way to divert his senses away from the procedures.”

With an idea in his mind and money donated by the Reading Elks Lodge, Lee went out and purchased a set of virtual reality (VR) goggles. With a little research, he found an app that he could download onto his phone to give it VR capabilities.

“I thought that if we could use the goggles to distract him, he might be relaxed enough to let us give him the shots and get the blood drawn,” he said.

Prior to his appointment, Lee asked the boy’s grandmother to bring him to the Pediatric Practice. The patient was given a tour of the facility, told exactly what would occur during his appointment and introduced to pediatric nurses Terry Fealtman and Malissa Argyle. He even had a chance to meet Toni Baver, the phlebotomist who would draw his blood.

Lee also showed the patient the VR goggles and explained how they worked, checking to make sure the boy was comfortable with the idea of using them. He was.

When he arrived for his scheduled appointment about a week later, staff applied a numbing cream to the boy’s arm and again explained how the procedures would work. When it was time for blood to be drawn, Lee inserted his smartphone into the goggles, creating a VR experience.

“We put on a nice, relaxing beach scene that he could look around and explore,” Lee said. “He was so interested in what he was seeing that he didn’t even notice what was going on around him.”

With the procedures completed, Lee and other pediatricians are considering other instances in which the VR goggles could be employed.

“We’ll be thinking about how else we might be able to use this technology to alleviate discomfort,” Lee said.

In addition to thanking the Reading Elks for the donation that paid for the goggles, Lee praised the staff at Penn State Health St. Joseph’s Downtown Campus.

“Their professionalism and technical expertise was just invaluable in this case,” he said. “This was definitely a team effort.”

While treating patients is all in a day’s work for medical professionals like Lee and other Downtown Campus pediatricians, Lee was humbled when he received a handwritten card from the patient’s grandmother, thanking him for his empathetic handling of her grandson, who had already suffered so much.

“If we can make things a little easier for patients and their families, then we’re doing our jobs,” Lee said.