Lorelei’s story: helping others is written on her heart 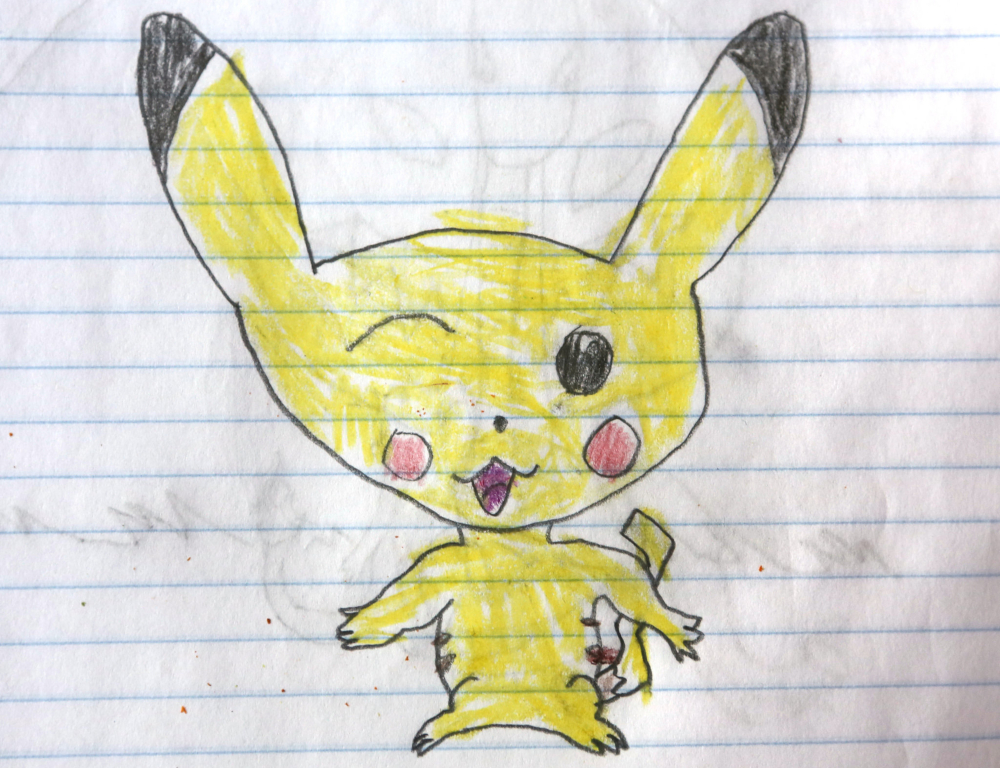 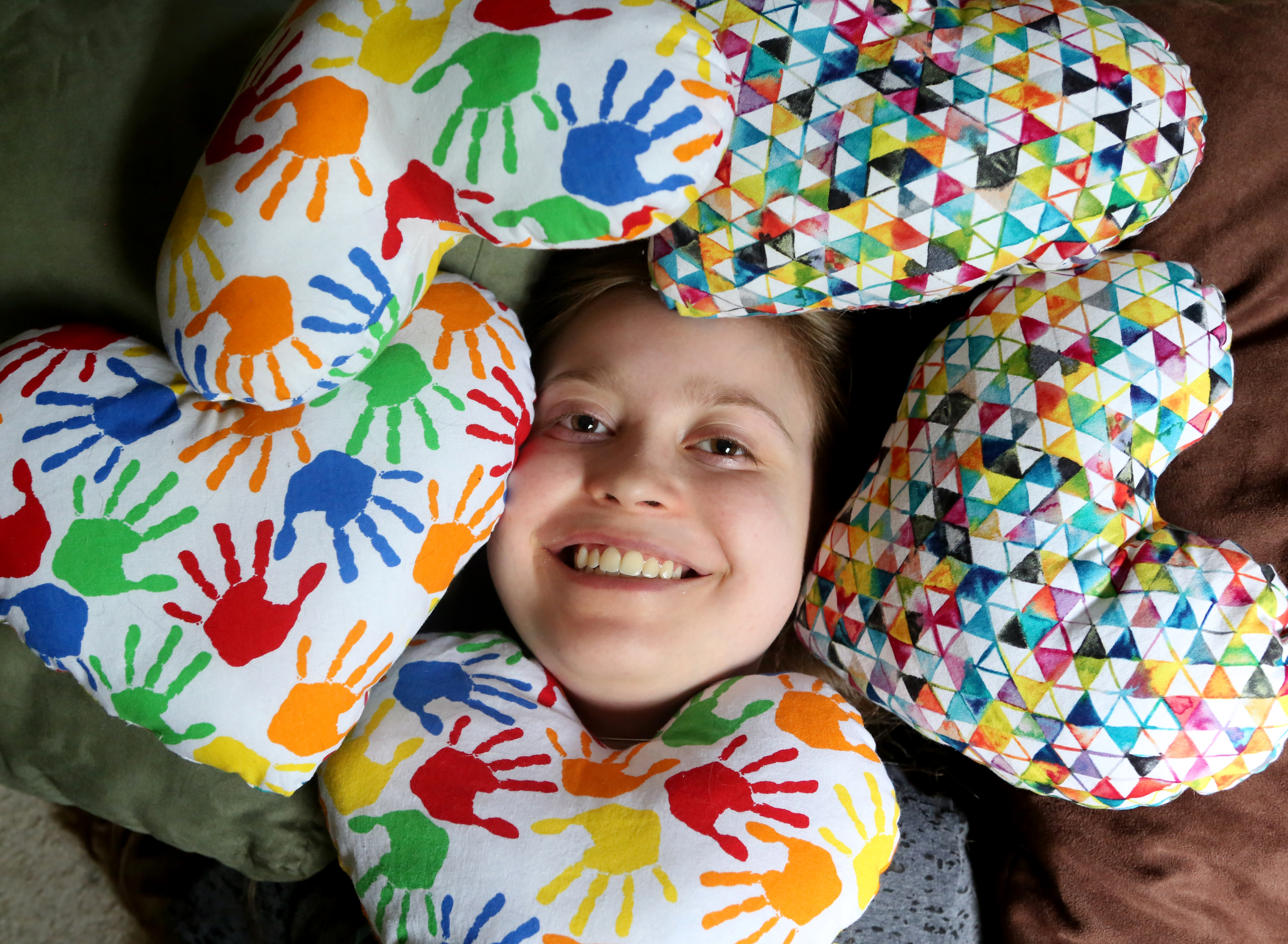 Lorelei McIntyre-Brewer is surrounded by her Heart Hug pillows that have been sent to more than 20,000 children around the world.

When Lorelei McIntyre-Brewer picks up a pen, her words—and her imagination—take her to places her heart never could.

“When I write, it’s just me and my adventures, and nothing can stop me,” said the 13-year-old Duncannon girl, who has already won three local writing competitions.

In reality, she knows hypoplastic left heart syndrome, a congenital heart defect, does stop her without warning. The three lifesaving open-heart surgeries she had by age 3 and 30 other procedures and hospital stays have a way of doing that, she admits.

“I don’t want people to see me just from one angle. I want them to see the real me, not just the girl with half a heart,” she said. “To me, my life is normal. People think it’s sad, but I have the best doctors and nurses in the world.”

Some of them are located right here, at Penn State Children’s Hospital, where Lorelei has been coming since she was born with the left side of her heart severely underdeveloped. Her rare heart condition was discovered at 21 weeks, after her twin brother, Rory, died in utero.

Lorelei’s future is far from certain, a fact that her mom says they don’t talk about much but is obvious from other children she knew who are no longer here.

How does a mother cope with that possibility? “I don’t think you can really focus on it,” said Lorelei’s mother, Chelle McIntyre-Brewer. “I have my moments when I collapse, but I try to do it when I’m in the shower and no one can see.”

Lorelei’s routine is unpredictable because a medical need could upend any plans, but she prefers to spend her days playing with her 5-year-old brother, Killian, or her cat, Calico, or her service dog, Mandu, a black lab that has the uncanny ability to sense when heart issues arise.

Adversity is no stranger to their family, Chelle says. Her husband Steve, who is in active duty in the Army, has had cancer three times. Lorelei’s uncles have lost limbs to the war in Afghanistan.

As if their own struggles aren’t enough of a challenge, the family advocates for other children with special needs—many of them orphans in foreign countries that need heart surgery—and for military families facing medical challenges.

“If you have the ability to help someone else, you need to—it’s your duty,” Chelle said.

Helping others is also a passion for Lorelei. When she was 5 and in 4-H, she got the idea to sew child-sized cardiac compression pillows for children having heart surgery. To date, her project called Heart Hugs has sent some 20,000 pillows to children around the world. Last year, she received the 2017 Prudential Spirit of Community Award in recognition of her efforts.

“To see a young person with a spirit to help others like Lorelei has is quite special,” said Dr. Robert Tunks, one of the Penn State Children’s Hospital pediatric cardiologists who treats Lorelei.

This year, for the third time, Lorelei won a first-place award in the History Contest for Young Writers, sponsored by The Hershey Story museum. Her fiction entry centered on an injured father returning from World I. “But we’ll pull through because that’s what you do when you’re a family, and you love one another,” she wrote, reflecting her own feelings into the story.

The budding writer credits her family, friends and animals with lifting her spirits when she’s down. 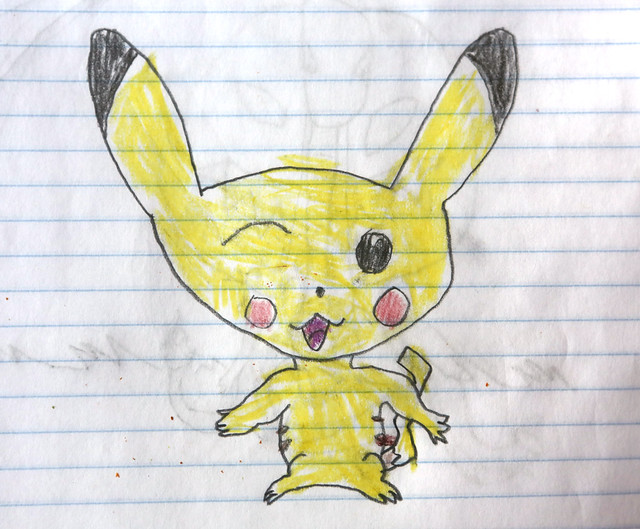 See a gallery of Lorelei’s artwork on the Medical Center’s Flickr page.

“We like to portray these kids as superheroes who are always happily fighting, but there are days when Lorelei doesn’t even want to live,” her mother said. “It’s healthy to talk about the fact that these kids are allowed to have these feelings.”

The family finds understanding at the Children’s Hospital, where “it’s about more than just patient care; it’s a culture of service,” her mother said.

Likewise, Dr. Angela Kelle, pediatric cardiologist at Penn State Children’s Hospital who cared for Lorelei during her hospital stay this spring, said she is impressed by the McIntyre-Brewer family.

“They use their knowledge and resources not only to advocate for Lorelei and further her care, which they do wonderfully, but also to actively look for opportunities to educate, help and comfort others in similar situations, and they do so with incredible energy, passion, kindness and a healthy dose of humor,” said Kelle.

“Lorelei is special because she is brilliant, and she has a warm heart and an adorable sense of humor,” said Chappell-Williams. “Most individuals her age would have been intimidated to present in front of a group, but Lorelei never missed a beat and did an exceptional job.”

“When I’m helping others, it gives me a warm and cozy feeling,” Lorelei said, “And I don’t feel dark and empty inside.”

Spend some time with Lorelei, and it appears she isn’t missing part of her heart after all. Quite the contrary—she’s all heart.